The rise of e-commerce in Asia is shaking up the logistics industry. The Asia-Pacific region is now the world's largest market for online shopping. The global economy may be slowing, but faster Internet connections and the spread of mobile phones translate to more growth for online sellers. These days, it is how the goods are delivered as much as the goods themselves that separates the winners from the losers. Often, the "last mile" presents the biggest hurdles. To clear those obstacles and gain an edge, companies are pursuing acquisitions and innovative partnerships. 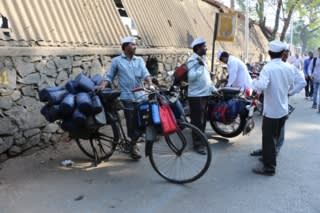 Dabbawalas bring home-cooked meals to Mumbai's hungry office workers. Some 5,000 of them deliver around 200,000 lunches per day. The business traces back to the British Raj, with the dabbawalas bringing meals to Indians who worked for British companies. One Flipkart executive told Talekar that the company wanted to collaborate with the dabbawala in deliveries "because of its proven quality over 125 years."

The dabbawalas may appear low tech, but Flipkart was impressed by their speed and accuracy. Now, in the afternoon, after they finish delivering their meals and collecting the empty containers, the dabbawalas are busy bringing customers their Flipkart purchases.

Other well-known e-commerce names are also making use of India's traditional delivery networks. Amazon.com has begun collaborating with corner stores called kirana. "We are doing 40-50 deliveries per day, and the number is growing," said Anant Deodhar, owner of a kirana in Andheri, a district in northern Mumbai. For the past six months he has been making deliveries for the U.S. online retailer.

Deodhar's store has been delivering groceries in the neighborhood since before Amazon came along. Its 10 employees know the area like the backs of their hands. Now Deodhar's customers also can pick up items they have bought from Amazon at his store. 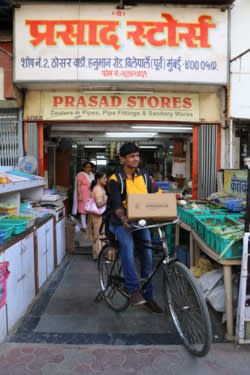 Amazon introduced the "pickup centers," in the winter of 2014. "Amazon benefited because delivery boys from the store know the place well enough to locate the address quickly," said an Amazon executive. The U.S. e-commerce company now has a network of 4,000 such stores across India.

Online shopping is the fastest growing industry in India. The market has been expanding by more than 50% annually, according to research companies. Flipkart, the industry leader has a market share of over 40% and 46 million registered customers. Online retailing has taken off in India along with the growth in smartphone users. Through 2018, its expansion is expected to outpace all other markets in Asia, including China, the world's largest.

Flipkart is said to make more than 450,000 deliveries a day, ahead of Snapdeal with 300,000 and Amazon with 250,000. The biggest online operators are working by trial and error as they work out how to move huge numbers of products through India's rudimentary distribution system. "In India, logistics companies are not very evolved and sophisticated," said Prahlad Tanwar, a director with Dutch accountancy KPMG.

Only a few companies in India have distribution networks that span the vast country. These include Blue Dart, whose investors include German logistics company Deutsche Post DHL, and Indian Post. "Traditionally, logistics has always been focused on the [business-to-business] sector, and the [business-to-consumer segment] was largely run by courier companies, which operated in [the area] of documents. The minute e-commerce came on board, it became very apparent that there is no company which has capability to deliver large parcels, not documents," said Tanwar.

That forced Flipkart and Amazon to set up their own distribution companies. But the rapid growth of e-commerce means they cannot do the job alone. They are now getting help, not only from dabbawalas and kirana stores, but from new ventures specialized in online shopping deliveries, such as Ecom Express and Delhivery.

K. Satyanarayana, a director at Ecom Express, predicted sales would double in two to three years. Ecom Express was founded in 2013 by CEO T. A. Krishnan and others, who saw an opportunity to make money servicing customers for their Web purchases. Krishnan is an industry veteran who previously oversaw Blue Dart's operations in northern India.

Delhivery, founded in 2011, got $85 million from U.S. investment company Tiger Global Management and others last year. It also handles goods for Amazon and Snapdeal. Older logistics providers such as Indian Post and Blue Dart are also building up their capacity to battle the start-ups. In 2015, DHL, Blue Dart's parent, unveiled a plan to spend $16.3 million to develop its network in India.

According to one estimate, online retailers reach just 14% of India's potential buyers. Net shopping has not gone national yet.

There is also a problem with the quality of delivery. Bhavna Atmaramani, a Mumbai housewife, said she uses Flipkart less frequently these days because on a couple of occasions the shoes she ordered were the wrong size.

According to KPMG, 15-20% of all Web purchases in India are returned, with 4-6% sent back because of delays, customers receiving the wrong item, or because they were not home when their goods arrived. Indian shoppers typically pay cash on delivery. If the customer is not there, the product has to be sent back and stored, adding to costs for retailers and distributors.

In big cities, online marketplace operators are starting to offer next-day deliveries, but, said Tanwar of KPMG, "That is very limited. The service is not standard, and it comes and goes."

There is no doubt that online shopping is a growth market in India. According to Euromonitor, a London-based market research company, the market is expected to expand from $6.9 billion in 2014 to $25.7 billion by 2019. Given the dearth of large retailers in India, the range of product choices available in online marketplaces is revolutionary for consumers. That same lack has held back the development of the country's logistics industry up to now, but that may change. The battle to bring home the goods is just beginning.