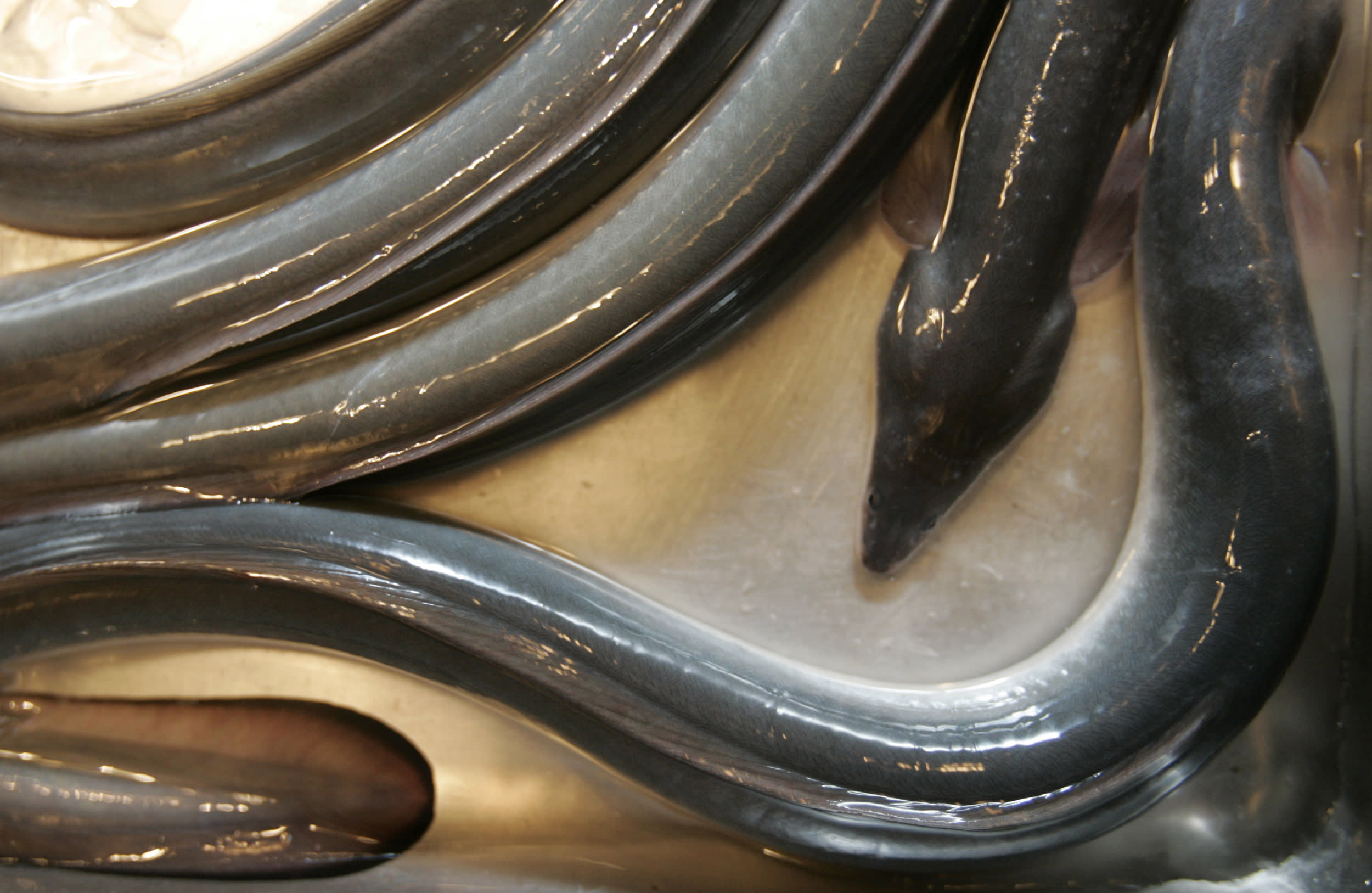 Many Japanese eat vitamin-rich eel to bolster their stamina in the strength-sapping humidity of the country's summers, especially on one day in particular, determined by the ancient solar calendar and believed to be the hottest of the year.   © Reuters
TAKUMI SASAKI, Nikkei staff writerFebruary 20, 2018 19:01 JST | Japan
CopyCopied

TOKYO -- Prices for young eels are surging to an unprecedented level in Japan due to extremely poor catches, promising to push the summertime delicacy further into the luxury realm and out of the reach of many Japanese.

Industry officials are even warning that a crisis is at hand, with eel stocks on the verge of running out.

"It's like prices have stepped on the accelerator," said Tetsuo Yoshida, president of eel importer Kasei Shokuhin.

This year's prices are well above the 2.48 million yen average for the 2013 season, when hauls were also poor.

Some importers say they have been able to obtain only half of what they ordered from Taiwan.

Japanese traditionally eat unaju, or chargrilled eel over rice, on a certain day of summer, Doyo no Ushi no Hi. But the skyrocketing price means the prized fare may become unaffordable to a wider segment of the population.

The juvenile eel fishing season starts in November and ends around four months later. The peak usually lasts through mid-January.

East Asia, the main production grounds, so far this season has landed 1 ton of baby eels, down from last season's 60 tons.

For businesses to grow the fry and ship them in time for Doyo no Ushi no Hi, when demand peaks in Japan, the fish must be purchased and placed in a pond by around Jan. 10.

"It may be the start of complete resource depletion beyond the framework of a bountiful catch or poor catch," said Takashi Moriyama, who heads the Japan Eel Importers Association.

In response to higher prices for juveniles, those for adult eels are also soaring.

Live eels now cost about 3,600 yen per kilogram, up roughly 20% from the end of last year.

With the number of inquiries increasing, the price of imported live eels may exceed the 8,000 yen level ahead of summer, according to Junji Yamada, the president of importer Yamasho Suisan.

In 2017, which marked the most bountiful eel harvest in three years, a number of supermarkets and department stores sold unaju and kabayaki -- a piece of eel dipped in a sweet sauce -- for about 10% less than in 2016.

Most kabayaki carried a price tag of 980 yen to 1,300 yen. Many outlets saw a 20% to 30% year-on-year increase in sales during the Doyo no Ushi no Hi selling season. A chef at a Tokyo eatery grills some eel.

Some eel restaurants are considering unaju replacements such as chargrilled chicken or pork, and some supermarkets might downsize their eel display cases.

Eel stocks were at a peak around 1970. Since then, they have declined by 90% due to overfishing and habitat deterioration. The loss of habitat is the result of reclamation work along the mouths of rivers and other activities.

Even without these factors, the eel population is extremely low.

"If the situation remains unchanged, eels could be designated an endangered species," said Shingo Kimura, professor of fisheries oceanography at the University of Tokyo's Graduate School of Frontier Sciences.

On Jan. 23, eel industry officials attended an annual information exchange. The icy atmosphere contrasted to the din last year, when the catch reached a three-year high. Farmers and importers at the recent meeting wore grave expressions as they discussed how to procure the fish.

The mainstream view is that poor eel catches will persist for an extended period. Adult eels lay eggs in the Marianas Trench, and young eels spend six months traveling northward along the current from waters off eastern Taiwan to Japan's coasts.

The fall in the adult eel population is also decreasing the number of juveniles being spawned.

Although hopes are rising for 100% farmed eels, no method has yet to succeed.