TOKYO -- As more people use chat and messaging apps to communicate with one another, Japanese food and beverage makers are increasingly turning to social network Line as a new and effective marketing tool to broaden their reach to consumers. 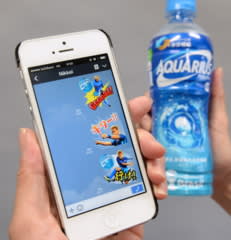 Line, a free call and online message app provided by the eponymous Tokyo-based company, has some 400 million registered users around the world. In Japan, it has become an essential communication tool for many; approximately 30 million people use it on a daily basis.

For businesses, this enormous user base is quite appealing. Now, a growing number of companies are using the app to reach out to potential customers.

One such company is major confectionary maker Ezaki Glico. As part of its sales promotion, the company has long offered free small gifts that come with their snack products to lure consumers. But this time, it gives away not toys but a set of emoticon stickers for Line text chats.

The strategy has worked. Sales of its long-time seller, Pocky chocolate-covered pretzel sticks, are up 30% on the year.

People use stickers in place of basic comments such as "thank you" and "I am sorry." Line users exchange roughly 1.8 billion stickers a day, according to the company. Stickers sets cost about 200 yen ($1.94) at the Line official online shop. Line 2013 sticker sales came to 7 billion yen, and are expected to rise by about 12 billion yen this year.

Glico offers customers original stickers for sales promotion. To get these free stickers, consumers need to input the serial number printed on a Pocky box into their smartphones. This is what Line calls its must-buy service, which it launched in spring last year. It costs more than 30 million yen, but the service is "more effective for appealing directly to consumers" than TV commercials, said a Glico official. Indeed, 21 companies, including Japan Tobacco, have used this service.

When Glico last September launched its first round of original stickers, more than 2 million people downloaded them for free. This means that it cost the company 15 yen for sales promotion fees per Pocky box. It may not seem like a cheap price tag, but industry observers estimate that it normally costs more than 1,000 yen in advertising to get one paying customer for a smartphone game.

What's more, this Line service has a broader appeal. "It can spread quickly from one Line user to his or her friends. As a means of word-of-mouth marketing, it is very cost-effective," said an official in charge of marketing at Coca-Cola (Japan). The beverage maker will also use Line stickers as a freebie to promote its sports drink during the upcoming FIFA World Cup that starts mid-June in Brazil.