BEIJING -- All is not well in China's retail sector. Shopping centers are being shuttered with regularity, as tenants abandon them. Yet the overall amount of commercial space in the country continues to swell.

The economy's weakening momentum and President Xi Jinping's belt-tightening are discouraging consumption. At the same time, shoppers are moving online, and foreign retailers are reviewing their strategies for expansion in the Chinese market.

The result of these developments: ghost malls. 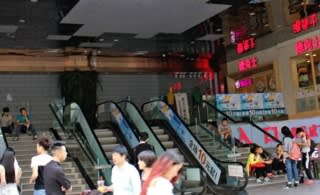 This shopping center in Chengdu, Sichuan Province, did not make it to its first anniversary.

The Sichuan Province city of Chengdu is home to 14 million residents. In May, a five-story shopping center in the busy Chunxi Road district was abruptly closed. It had just opened in September. The operator blamed competition with online retailers, whose lower overheads allow them to offer unbeatable bargains.

"Rent in the building was expensive, and so were the goods sold there," said a sales clerk at a nearby shop.

Meanwhile, Central Group, a leading Thai retail chain, used to run four department stores in China but will entirely withdraw from the market. Its last store, in Chengdu, is to close in August.

British retailer Marks & Spencer announced closures of five stores in Shanghai. All told, the city has lost about a dozen department stores over the past year.

Up in Shenyang, capital of the northeastern province of Liaoning, the Sunshine department store is trying something different to survive.

"Any business can apply," reads a tenants-wanted sign at the entrance. Some 100,000 sq. meters of space are now available to companies besides shops and restaurants. 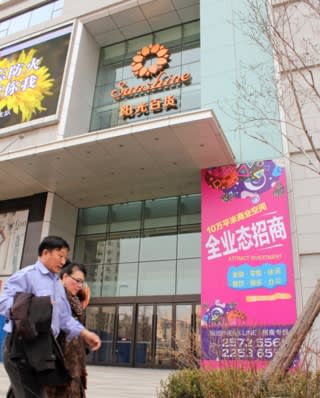 Sunshine opened in the summer of 2013. It has seven above-ground stories and one underground level. Aside from the ground floor, most of the levels are dark, since few stores are open.

Finding tenants is unlikely to get any easier, since shopping centers continue to sprout around the country.

In a quest for revenue, China's local governments eagerly sold land-use rights to real estate developers, which in turn were optimistic about retail prospects in a country where incomes are rising.

According to China's National Bureau of Statistics, the net increase in commercial space came to about 120 million sq. meters last year. If we assume an average facility takes up 50,000 sq. meters, the extra space would be enough to fit about 2,400.

A separate study projects that 50 major Chinese cities will see an increase of 560 million sq. meters this year. That would mean growth of roughly 80% in two years.

But what good is space if you cannot fill it? 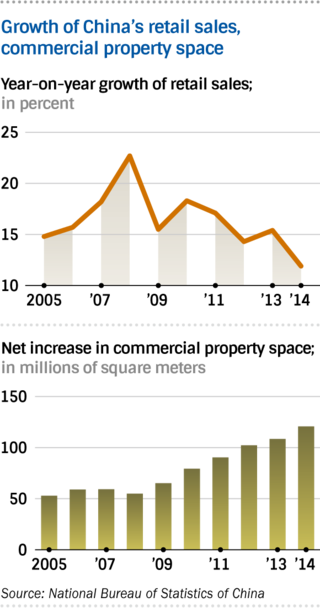 Data from the statistics bureau shows that retail sales grew an underwhelming 11.9% in 2014. The Communist Party's program to cut spending on extravagances hurt sales of jewelry and other expensive items. This coincided with a 50% expansion of the online market, to 2.78 trillion yuan ($447 billion). That accounted for more than 10% of all retail.

With the risk of closures haunting the industry, the Sunshine department store is not the only one getting creative. Major commercial developer Dalian Wanda Group plans to use online crowdfunding to raise cash from numerous small-scale investors. The company would reinvest the money in commercial facilities and offer sponsors returns. This approach could help to spread risk and avoid fund shortages.

But industry watchers say that in addition to economic factors, Chinese mall operators are suffering from poor marketing strategies. Their facilities tend to have similar shop lineups, often featuring global megachains such as Uniqlo and Zara. According to DTZ, a U.S.-based real estate consultancy, retailers will not survive unless they narrow down their target consumers by age and income.