HANOI -- Riots that killed four Chinese workers and damaged hundreds of factories in May have slowed Vietnam's economic growth and shaken Chinese and Taiwanese businesses. But overall, foreign investors remain confident in the country's growth potential, despite concerns about corruption, red tape and the slow pace of legal reform.

The violence was triggered by China's decision to build an oil rig in waters it claims off the coast of central Vietnam, although Taiwanese companies were the hardest hit.

Taiwanese bicycle manufacturer Asama Yuh Jiun Industrial threatened to leave the country unless adequate compensation was paid for a factory in Binh Duong that was almost completely destroyed by fire. The company later received $3.3 million in compensation but has not said whether this has affected its future investment plans.

The riots in Vietnam were a major factor behind the Asian Development Bank's decision in July to cut its 2014 economic growth outlook in Southeast Asia by 0.3 of a percentage point, to 4.7%; the bank did not quantify the precise impact on Vietnam. Some foreign business experts said the damage would be significant: Serena Liu, chairwoman of a Taiwanese business association, said 10% of investors from Taiwan had fled Vietnam.

However, concerns about a wider exodus seem to be largely unwarranted. More than 90% of damaged Taiwanese businesses have resumed operations, including Hon Hai and Yue Yuen, the Taipei Times recently reported. In July, Formosa Plastics resumed construction of a $10 billion integrated steel mill in Ha Tinh, with $1.4 million in compensation from the local government, in addition to insurance reimbursements.

Other major foreign-invested projects are also in the works. A $1 billion factory complex in Bac Ninh for South Korean conglomerate Samsung was approved in July, and Tai Yuen, a subsidiary of Taiwan's Yun Lon Group, received permission in July to build a $150 million textile mill in Ha Nam. Microsoft said July 17 that it would concentrate production of Nokia mobile phones in Hanoi, while cutting back in China and making other changes.

The U.S. tech giant is one of several global manufacturers that are shifting operations between neighboring countries as labor and environmental costs in China increase and businesses begin to anticipate the impact of trade negotiations, such as the Trans-Pacific Partnership. If signed, the TPP would likely include Vietnam but not China.

According to the Vietnam Leather, Footwear and Handbag Association, major shoemakers like Nike, Adidas and Puma have directed 25% more production into Vietnam so far in 2014 than in the comparable period of last year. Luxury handbag makers Lancaster and Sequoia Paris have also begun investing in the country.

"Some investors from Taiwan and mainland China are still deliberating what to do next," said Fred Burke, head of the Vietnam Business Forum's investment and trade working group and managing partner at law firm Baker & McKenzie (Vietnam). "However, for others, the whole episode seems to have driven them closer than ever to Vietnam as an alternative business development opportunity to China. Manufacturers, particularly those from Japan and South Korea, looking to keep their production costs competitive, have been searching for supplements to their China production capacity for some time.

"Recently, this trend has been accelerating, due not just to the cost differentials but also regional geopolitical tensions and Vietnam's aggressive negotiation of a network of trade agreements."

According to Baker & McKenzie, Samsung is sourcing around 40% of its global smartphone capacity from Vietnam, and "actively encouraging" suppliers to relocate near its factory in Bac Ninh, aided by a trade pact currently being negotiated between Vietnam and South Korea. 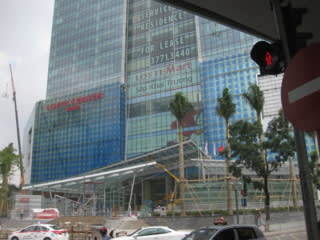 In another sign of the confidence of some foreign investors, Thai distributor Berli Jucker recently bought German retailer Metro's 19 Vietnam grocery stores for $876 million, a deal it had been pursuing since last year.

Foreign investors have come to play an increasingly significant role in Vietnam's economy. Foreign investors surpassed domestic companies in terms of exports last year, accounting for 67% of total export turnover and contributing to a trade surplus of nearly $900 million. While the foreign direct investment sector's exports grew an average of 27.5% in 2012 and 2013, the comparable figure for domestic companies was 2.3%.

Pledges of new foreign investment tumbled 35% on the year to $6.85 billion in the first half of 2014, according to the Ministry of Planning and Investment, suggesting that some investors might be rethinking their plans for Vietnam. However, the ministry also said the actual inflow of investment for the same period rose 0.9%, to $5.75 billion over the previous year, and most experts are taking a more sanguine view of the country's long-term prospects.

Nhan Nguyen, managing partner at BDG Asia, a business and management consultancy, said the riots had not changed the investment plans of the group's international clients, neither delaying manufacturing projects they had already committed to nor bringing new projects into question. "Most new investors are tracking the issue but not paying too much attention to it," he said.

Much of this somewhat positive sentiment springs from the government's decisive response to the riots. The authorities reassured foreign investors that they would be fully compensated for damages, and President Truong Tan Sang visited the Vietnam Singapore Industrial Park in Binh Duong, where nearly one-third of the 326 factories were damaged, to convey the government's commitment to maintaining order. Speaking to business representatives, Prime Minister Nguyen Tan Dung vowed that similar "incidents" would never happen again.

Even so, while most investors are not ready to abandon Vietnam, many say they are frustrated by the country's business environment, notably the corruption, red tape, and the tortuous legal system. "Laws tend to be unclear and contradict each other, which is one of the obstacles to doing business in Vietnam," said Chris Freund, a partner in Mekong Capital, a Vietnam-focused private equity firm. "Reforms are moving more slowly than foreign investors would like."

Overall, the government seems to have succeeded in reassuring foreign investors that the riots were an isolated incident. But keeping them happy in the longer term may require displaying the same commitment to economic and legal reforms.

"The fundamentals of Vietnam's business climate have not changed, especially since the government acted quickly to restore confidence," said Adam Sitkoff, executive director of the American Chamber of Commerce in Hanoi. "But for most companies, Vietnam remains a difficult place to be successful.

"The government needs to move forward on necessary reforms to create a more competitive environment where decisions are made faster, procedures are less complicated, rules are fairly enforced and companies compete on their merits."