TAIPEI -- The Foxconn Technology Group, constantly searching for opportunities other than assembling Apple gadgets, is joining hands with China's Alibaba Group in e-commerce and cloud-computing ventures. 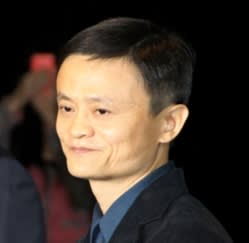 Terry Gou, chairman of the Taiwanese contract manufacturer, has been aggressively branching into other sectors, including telecommunications and robots, as his empire grapples with tight margins from churning out iPhones. In recent months, Alibaba, which has multiple e-commerce platforms, has emerged as a key strategic partner for Foxconn, also known as Hon Hai Precision Industry.

On Tuesday, Gou attended a lecture by Alibaba founder Jack Ma in Taipei, where he told reporters that he, Ma and SoftBank CEO Masayoshi Son had met before mid-February's Chinese New Year to discuss a potential partnership. SoftBank is one of Japan's three big cellphone service providers and an up-and-coming high-tech player. Gou also said Foxconn might sell Pepper, the robot it makes for SoftBank, through one of Alibaba's platforms. Ma, meanwhile, said that Alibaba and Foxconn will announce additional joint projects at a later date. He did not give details.

Over the past few months, Foxconn and Alibaba have formed a close alliance and collaborated on big data and cloud projects. Both companies are enthusiastic about these nascent sectors.

In late November, Foxconn signed an agreement, reportedly worth 3 billion yuan ($487 million at the time), with Alibaba and Beijing-based 21Vianet Group to offer Internet and big data services as well as set up free Wi-Fi connections in Guiyang, a city in southwestern China.

The two tech conglomerates are now joining forces for a similar project in Hangzhou. On Monday, Gou signed an agreement with the municipal government of Hangzhou, where Alibaba is headquartered. The pact calls on Foxconn to provide infrastructure for a cloud computing technology park that Alibaba is constructing.

Further, Foxconn and the Hangzhou government said they will build a cross-border e-commerce experimental zone to help Hangzhou e-tailers.

It was Gou's second visit to Hangzhou in a month. During this week's visit, he also met Ma and retailers on Taobao, an Alibaba platform that is the Chinese equivalent of eBay.

According to a person familiar with the relationship, Foxconn is working with Alibaba on an initiative to help sellers who use Alibaba improve the quality of their products and upgrade their businesses.

The Foxconn-Alibaba partnership goes back a number of years. In 2007, they invested a total of $15 million in Hangzhou-based Best Logistics, a key logistics supplier for Alibaba's e-commerce sites. Last year, Foxconn opened official sites on Alibaba's e-commerce platforms to sell phones it makes for InFocus, a key U.S. strategic partner.

The two chiefs have also said they enjoy each other's company. While Gou has already visited Hangzhou twice this year, Ma visited Taiwan for the first time in December. On Wednesday, Gou gave his friend a guided tour of a local medical research facility Foxconn is sponsoring.