German soccer warms up to investment from China

Clubs to work together on training and development HAMBURG, Germany -- A bilateral agreement signed in Berlin recently has opened the door to Chinese investment in Germany's soccer leagues at a time when the country's top clubs are seeking to diversify their revenue streams.

The five-year agreement, signed by German Chancellor Angela Merkel and Chinese Vice Premier Liu Yandong in late November, lays the groundwork for closer cooperation between the two countries, and between soccer clubs.

The agreement will allow China to pay for German experts from the Bundesliga, Germany's premier professional soccer competition, to help improve its national team and to develop its Chinese Super League clubs.

Ultimately, some Bundesliga clubs hope that Chinese entities will invest directly in them, though the bidders are unlikely to be able to take control because of the league's restrictive ownership rules. Most clubs must be majority owned by club members, although three are controlled by large companies or individuals, for historical reasons.

Hertha Berlin managing director Ingo Schiller confirmed to the Nikkei Asian Review that the club would welcome Chinese investment. Other clubs, such as Hamburger SV, FC Cologne and SV Werder Bremen, are thought to be in the sights of Chinese investors. 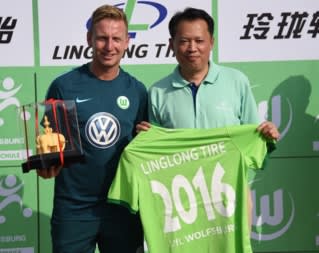 VfL Wolfsburg, which stood 15th in the 18-club Bundesliga on Dec. 16, has already been approached by Chinese companies. The club, owned by carmaker Volkswagen, has ruled out a sale, but sees the offers as evidence that Chinese investment in the league will happen soon.

"We have recently often been approached by Chinese companies seeking investment options, and that makes me think Chinese investment in the Bundesliga will soon materialize at long last," said managing director Thomas Roettgermann.

"Chinese investors would not necessarily insist on full ownership, as they are primarily after an attractive advertisement platform in Germany and know-how transfers to China," Roettgermann added.

China has been investing heavily in European clubs over the last two years, driven by its ambition to host the soccer World Cup in 2030 and to become a world superpower in the sport by that date.

Chinese entities have also bought stakes in clubs in the U.K., France, the Netherlands, Spain and Italy. But the Bundesliga has so far missed out on the bonanza because of the league's ownership restrictions.

Immediately after the agreement with China was announced, FC Cologne and Bayer 04 Leverkusen announced cooperation agreements with Liaoning Whowin FC and Inner Mongolia's Baotou city, under which the Chinese will pay for soccer German expertise.

These arrangements add to similar existing relationships between clubs such as Hamburger SV and Shanghai International Port Group FC. In addition, FC Schalke 04 and Borussia Dortmund have run soccer camps in Chinese cities, including Shanghai and Beijing, financed by Chinese companies and the Chinese government.

For German teams, playing in China also raises their profile and could attract talent. "The best players identified in our soccer camps can come to our soccer academy in Germany, and our popularity in China would benefit if we eventually get them to play in the Bundesliga for Schalke," said Alexander Jobst, a member of the Schalke managing board.

For Chinese companies investing in German clubs there is the added advantage of brand recognition. One of Schalke's main sponsors, Qingdao-based electronics manufacturer Hisense, had zero brand awareness in Europe at the start of its sponsorship in 2014, but has now achieved 50% "among the soccer-interested population," in Germany, according to Jobst, citing data from Nielsen Sports.

Jan Lehmann, managing director of Nielsen, agreed. "A billion-euro acquisition of a German medium-sized manufacturer by a Chinese investor would be picked up on by business magazines only; any seven-digit euro acquisition of a Bundesliga club would lastingly receive coverage in Germany's mass media."

Lehmann said that although European clubs received just over $35 million from Chinese sponsors during the 2015-2016 season, many Chinese companies and investors see ownership of the assets as marketing and advertising tools for their businesses.

Broadcast soccer is extremely popular in China, and demand is growing rapidly. Nielsen Sports, a market researcher and consultancy, said that 31% of the urban population aged 16-59 watches soccer regularly on TV or online.

According to U.K.-based soccer event organizer Soccerex, the Bundesliga accounted for 1,469 hours of TV airtime in China in the 2015-2016 season, ranking third behind England's Premier League and Italy's La Liga.

While state-owned China Central Television holds all the rights to Bundesliga games in China, there are hopes that the bilateral agreement will pave the way for more Chinese city and provincial TV stations to make bids.

The Bundesliga's vehicle for marketing audiovisual rights, Sports Enterprises, would not disclose the value of the league's contract with CCTV. But it confirmed that talks are underway in China on a deal for broadcasting rights for the 2017-2018 season.

As Chinese audiences grow, VfL Wolfsburg is also working on the superimposition of brands onto sideline banners around pitches for TV audiences. This technology is used in some broadcast sports overseas, but it is unprecedented in German league games and will open the possibility of expanding advertising income.

The technology allows the projection of multiple logos for different television audiences -- for example, matches could be broadcast in Asian countries with sideline advertising in local languages.

The bilateral agreement marks a first step in soccer collaboration between Germany and China. But Lehmann said that Germany may yet yield to competitive pressure from European rivals to relax club ownership restrictions.

"Bundesliga is changing to eventually allow outside ownership, including by Chinese investors, under the impression that they otherwise forgo one financing options their rivals have," said Lehmann.