An Honestbee worker checks her smartphone as she shops in the produce aisle of a Precce supermarket in Tokyo.
KENTARO IWAMOTO, Nikkei staff writerSeptember 4, 2017 07:45 JST | Japan
CopyCopied

TOKYO -- Prime Minister Lee Hsien Loong used Singapore's recent National Day Rally to speak of "a smart nation." By that he meant a country that uses information technology to increase jobs, opportunities, productivity and convenience. During his speech, he mentioned three online delivery services that "have become popular" in the city: Amazon Prime Now, online grocer Redmart and Honestbee.

That last one is a shopping service. Download the app, and you can use it to hire people to go to the store for you and deliver your groceries.

By harnessing the spare time of the hive, Singapore-born Honestbee has expanded fast into the rest of Asia. In July, it entered its eighth Asian market, Japan. The startup is already in Hong Kong, Taiwan, Malaysia, the Philippines, Indonesia and Thailand.

One mid-August day, a young woman wearing a yellow shirt at the Precce supermarket in Tokyo's Nakameguro district was filling a basket with spinach, burdock and other foods. She had accepted a task through Honestbee.

In her left hand she held a smartphone, which was displaying a list of items a customer had selected. After she collected the products and paid for them, she placed the order behind the store for another bee to pick up and deliver by bicycle, motorbike or car. 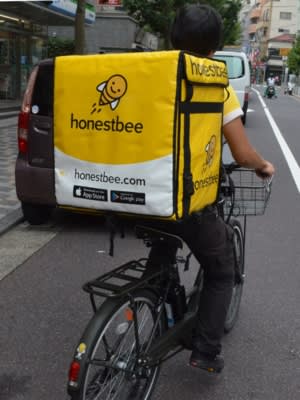 This Honestbee worker in Tokyo makes deliveries using a bicycle.

The app has a list of stores that customers can choose from. The next step is to select the desired products. Payments are made by credit card. A "concierge" fee of 490 yen ($4.50) and a delivery fee are added.

For Honestbee, Japan could be an ideal market. "There is no housemaid culture in Japan," Sampath said, "so the potential is bigger than that of other markets."

He added that all the foreign tourists coming to Japan -- some of whom might have difficulty shopping here -- could also prove to be good customers. The app shows stores and product information in the local language, in this case Japanese, as well as in English.

According to Honestbee's website, some 30 stores and restaurants in Greater Tokyo have signed on. There are imported food stores, wine shops, even a florist.

Honestbee is trying to distinguish itself from other e-commerce players like Amazon by helping real stores. It provides its app system to its partner retailers for free, toppling a big barrier stores face in trying to enter the home delivery market.

Honestbee might even introduce new customers to stores. According to Koichi Matsumura, who supervises online services for Tokyu Store, which operates the Precce chain, about 90% of Honestbee customers live more than half a kilometer from the Nakameguro supermarket. This means Honestbee helped the store reach outside its catchment basin.

In Japan, Sampath said, Honestbee aims to double its operating area by the end of this year. According to its website, the service currently covers 10 of Tokyo's 23 wards and a limited area in neighboring Kanagawa Prefecture.

One challenge will be hiring enough shopping and delivery personnel. Currently, Honestbee has over 100 staff who work regularly, Sampath said. But Japan is experiencing a labor shortage. In July, the jobs-to-applicants ratio marked a 43-year high of 1.52.

Honestbee believes it can find enough help among housewives and other people who have some spare time and don't mind working on a freelance basis. Since shopping for and delivering products don't require special skills, "a mother who can only work two to three hours a day can do this job," Sampath said.

But even the competition to hire freelancers is heating up thanks to the arrival of services like UberEats, Uber Technologies' food delivery service. Honestbee's Japan expansion likely depends on how well it navigates the freelance market, where success can depend on good working conditions.