In India, technology helps the unbankable to bank

NEW DELHI -- Financial technology has been the toast of the finance sector in recent years, leading to an e-commerce boom that is reshaping global retailing. But policymakers and regulators are increasingly focusing on the potential of technology to reach people outside the formal financial infrastructure. About 2.5 billion people worldwide have never had a bank account, according to recent World Bank estimates, either because they lack financial literacy or because the costs of servicing them are too high for banks.

In India, financial inclusion has been a cornerstone in banking regulation policy for two decades. Almost 47% of Indians do not have bank accounts, and 43% of accounts lie unused for more than two years, according to the World Bank.

Without financial incentives, getting banks to cater to people on the bottom rung of the economic ladder has required significant regulatory prodding. Vast swathes of rural India still lack traditional banking infrastructure and access to credit.

However, India has close to 980 million estimated mobile connections, according to the telecommunications regulator, and an ecosystem of technology firms piggybacking on the mobile phone infrastructure is now starting to service the underbanked population.

The sector is growing so fast that foreign players are getting in on the act. Venture capital firms such as Sequoia Capital and Accel of the U.S. have injected close to $150 million in the sector this year, compared to $42 million in 2014, and the amount is expected to continue to grow.

Payment processing services have been the biggest beneficiaries from investment flows into financial technology, spurred on by Reserve Bank of India regulations that have given banking licenses to 11 new payment banks, including two run by the cell phone operators Airtel and Vodafone that provide remittance and fund transfer services.

Paytm, a homegrown mobile payments behemoth and licensed payment bank, raised a hefty $680 million this year from a consortium of investors led by Alibaba, the Chinese online giant. But Paytm has been the exception, with most mobile payment firms attracting only early stage and angel investors.

One of these was domestic e-commerce company Flipkart, which invested close to $7 million in payment services startup FX Mart for a majority stake. Another was Chillr, a multi-bank payments bank supported by HDFC Bank and Bank of Baroda, which recently raised $6 million from Sequoia Capital.

Sucharita Mukherjee, the Chennai-based chair of IFMR Holdings, one of the largest rural financial firms in India, said the mobile technology ecosystem, spurred on by the licensing of payment banks, would be a game changer. "Payment banks could revolutionize the use of mobile money. The RBI has taken a very large step to ensure that payments [will] be much less costly for the financially excluded customer," she said.

The preference for cash in the Indian economy is high, but so is the cost of handling and storing it. Mukherjee said that more use of mobile money, for example, would dramatically bring down operating costs across the economy.

According to Sanjeev Chandak, founder and CEO of ftcash in Mumbai, there are more than 55 million small businesses in India, but point of sale machines serve only 1.1 million, or 2%. "A lot of these merchants don't want to deal with banks and jump through all their hoops to get a card machine. Because these merchants don't accept electronic payments they have to physically go to the customer to accept payments," he said. 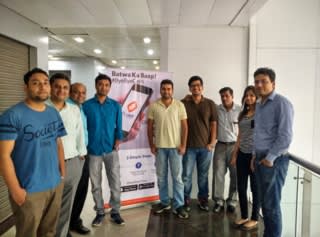 Sanjeev Chandak, third from left, founder and CEO of ftcash, along with part of his team in Mumbai

Rakesh Gupta, a fruit stall owner in a Mumbai suburb, said that since his adoption of mobile money via ftcash, a mobile app that allows payments through bank cards and mobile wallets, he has been able to plug small cash leakages and keep his money relatively safe.

"Sometimes customers forget they haven't paid their bill and I have to let that go for the risk of losing a customer for 600-700 [Indian] rupees ($9.60-$11.20). It's also a lot safer to use the app to receive payments instead of trusting delivery boys with large sums of cash," he said.

Credit is another important area that has evaded most small and marginal borrowers. Rajat Gandhi, founder and CEO of faircent.com, a Delhi-based online peer-to-peer lending platform, saw an opportunity to build a platform and profit from the country's restricted lending practices. He said the banking system typically lends to people who are already well funded.

"That's the joke in the lending industry -- that banks will only lend to people who don't need the money. Smaller enterprises and certain professionals like policemen and lawyers often find it difficult to get loans," he said.

The peer-to-peer lending market is not yet as big as the payments sector, but there is space to grow. Rahul Chandra, co-founder and managing director of Helion Ventures, an early stage venture capital firm that focuses on technology-powered startups, said that online lending platforms would attract between $1 billion and $1.5 billion in aggregate capital in the coming years.

"The capital that the sector will take will be very large as they have to lend at two to five times their net worth, depending on how fast they grow. Lending platforms will need initial equity infusions of at least $150-$200 million each," he said.

Mukherjee also pointed out the potential from data mining to build better and more sophisticated credit profiles. The Indian government's Aadhar unique identity program, which seeks to create a national database of citizens' profiles and biometric information, is one place to start.

"We can build better profiles to enable credit decision-making through the database of customer profile information, which necessitates a reduced brick and mortar presence. We feel, especially in urban areas, this will indeed be game changing. If a customer with an already good credit history can get access to credit much more conveniently, let's say via mobile in the future, that could lead to much lower operating costs of appraisal as well," she said.

This national financial technology startup ecosystem supported by global capital is expected to continue to grow, marking an evolving shift in the profile of India's financial industry, with huge potential benefits for customers who have previously been largely ignored by the banking system.

However, Mukherjee said that despite the technology's great potential, customer relationships would continue to require a human touch. "We think a human interface still provides the most value in ensuring a deeper understanding of customer requirements. But that person would be extremely empowered by technology," she said.