Industrial parks give boost to Modi's 'Make in India' drive

OneHub Chennai is to be built on this site, 50 km from the center of the southern city. (Photo courtesy of OneHub Chennai)
GO YAMADA, Nikkei senior staff writerJuly 9, 2015 19:00 JST | Japan
CopyCopied

TOKYO -- The Japanese and Indian governments are throwing their weight behind industrial parks dedicated to helping Japanese companies enter India.

The move is aimed at helping these companies get the land and infrastructure they need to do business, and indirectly supporting Prime Minister Narendra Modi's "Make in India" manufacturing initiative and economic reforms.

The two governments have chosen 11 candidate industrial sites as Japan Industrial Townships. They will be located between Delhi and Mumbai, where a comprehensive infrastructure development project centered on a high-speed railway is underway, and between two big southern cities, Bangalore and Chennai. The townships will focus on supporting tenants and developers of the industrial parks by providing yen loans.

The 11 proposed sites Tokyo and Delhi agreed in April to include OneHub Chennai, an integrated industrial and residential township being developed by Japan's Mizuho Bank and JGC, along with Ascendas of Singapore. Other parks will be built in Neemrana in the western state of Rajasthan, where a Japanese industrial park is already operating; in Ghilot; and in Mandal, located in Modi's home state of Gujarat, close to Maruti Suzuki's new auto plant. 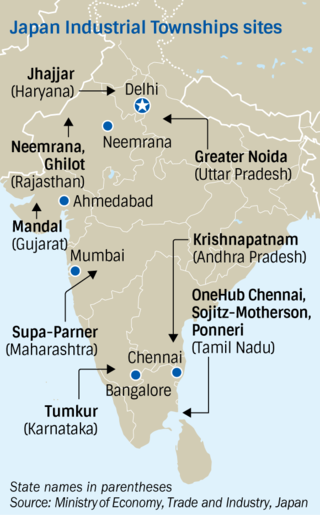 As of April, 46 Japanese companies are up and running in Neemrana, or are scheduled to be. Ghilot industrial park began selling lots in April.

Japan's Ministry of Economy, Trade and Industry will take requests from a working group consisting of Japanese companies, developers and state officials regarding tax breaks, easing of regulations and preferential supply of electricity, presenting them to the central and state governments for consideration. Tokyo will also use program loans, which promote infrastructure development and indirectly support Japanese companies and industrial park developers, providing cash for investment promotion programs drawn up by state governments.

In November 2013, Japan International Cooperation Agency and the Tamil Nadu government signed a loan agreement to develop infrastructure in the state. The ministry in this February also began considering similar loans to the southern state of Karnataka.

Indian industrial parks are becoming more friendly to expats. Previously, state governments developed and sold sites, while tenants were left to take care of finding water and electricity. But OneHub Chennai, for example, aims to become a "one-stop shop" that brings residents close to their workplace, and offers hospitals and leisure facilities, as well as tax, legal and human resources support.

Japanese trading company Toyota Tsusho has acquired roughly 200,000 sq. meters of land in Mandal industrial park in the suburbs of Ahmedabad, Gujarat. The company will offer support services for Japanese tenants in its industrial park: distribution, outsourcing of administrative tasks such as accounting, catering, worker transportation and "plug-and-play" rental factories for smaller companies.

Seeing progress in the Japan Industrial Townships program, South Korea and China have followed suit. The Korea Trade-Investment Promotion Agency signed a memorandum of understanding in 2013 with the Rajasthan State Industrial Development & Investment Corporation to build a South Korean industrial zone next to the one hosting Japanese companies in Ghilot industrial park.

Chinese President Xi Jinping unveiled a plan to build an industrial park for Chinese companies in Gujarat when he visited India in September 2014. Wang Jianlin, chairman of China's largest commercial property developer, Dalian Wanda Group, met with Modi in India in June, saying he wanted to build several industrial townships and shopping malls in the country. A delegation from the China Association of Small and Medium Enterprises also visited Gujarat the same month and announced plans to create a textile industrial park for Chinese companies.

A consultant with Nomura Research Institute who studies the Japan Industrial Townships project says Japan's efforts have changed the attitude of Indian state governments. He also said although support systems are weak compared with those in Southeast Asia, the state governments are actively working to attract Japanese companies and competing with one another for investment.

The southeastern port city of Krishnapatnam, in the state of Andhra Pradesh, was shortlisted for one of the Japan Industrial Townships. N. Chandrababu Naidu, the chief minister of Andhra Pradesh, on a visit to Tokyo, said, "Every clearance (for applications) will be given in 21 days" through a newly established Japan Desk set up exclusively for Japanese investment. "We will provide sector-wise specific incentives on case by case basis," he stressed.

Problems remain. India urgently needs to reduce high industrial electricity tariffs, and to build roads connecting major ports and highways with its industrial parks. Whether legislation on land expropriation aimed at expediting industrial projects makes it through the Indian parliament in July could determine whether "Make in India" can remake India.