Demand for tried-and-true treatments expected to rise in China, India TOKYO -- Japanese pharmaceutical companies are increasingly investing in China, India and other Asian markets outside their home country where lifestyle-related diseases are taking hold.

The companies mostly plan to market drugs that have lost patent protection in Japan. Although less costly generic versions of these drugs are becoming popular, the companies expect Asia's growing income levels to fuel demand.

Daiichi Sankyo is set to spend about 3 billion yen ($27.3 million) building a new production facility at its Shanghai plant. The plan is to produce more Asmeton cough suppressants; Olmetec, a high blood pressure drug; and other medications. Production is expected to double from 2016 levels. The new facility will have a line to produce capsules and packaging. 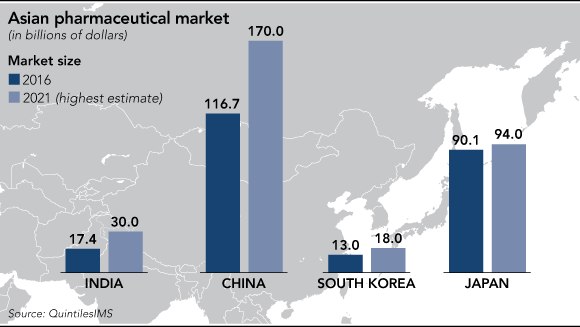 Demand for these drugs is growing in China, where air pollution and changing lifestyles are causing more people to come down with respiratory and circulatory diseases.

Takeda Pharmaceutical by last year increased the number of its medical representatives in China to about 1,400 -- 40% more than it had in 2012. The company plans to target patients with gastric ulcers, prostate cancer and other diseases that have been more common in the West.

Eisai has licensed Biocon, a big biopharmaceutical company in India, to sell Eisai's Pariet gastric ulcer treatment. Eisai hopes that enlisting a well-established local partner will help it to gain a foothold in India.

Living standards have improved in China, India and elsewhere in Asia, thanks to economic growth. But with the westernization of diets, lifestyle-related diseases are becoming just as common as in rich countries.

QuintilesIMS, a research company, estimates China's pharmaceutical market will be worth up to $170 billion in 2021, up roughly40% from 2016. Although problems remain, such as the approval process for drugs and regulations, China has much more room for growth than countries like Japan, which is expected to grow little over the same period.

The problem with China is that the market is mostly dominated by existing drugs and traditional medicines, leaving little room for new drugs. With the public health insurance system still a work in progress, only wealthy Chinese can use costly new drugs from Western pharmaceutical companies.

Thus, Daiichi Sankyo and other Japanese drugmakers reckon their drugs that are no longer patent-protected at home can bring in steady revenue if marketed to Asia's growing middle classes. They hope to make a profit in Asia's emerging economies without having to spend money developing new drugs.