TOKYO -- Japanese telecommunications carriers and other corporations are racing to commercialize fifth-generation mobile technology ahead of the 2020 Tokyo Olympics.

The envisioned 5G network would feature data-transmission speeds of up to 20 gigabits per second -- more than 100 times faster than current 4G networks.

The network's latency -- a communication delay between two nodes -- would be negligible, at less than 1 millisecond.

5G will be basic infrastructure during the so-called Fourth Industrial Revolution, which will be defined by artificial intelligence, the internet of things and other connected technologies.

Next-generation wireless networks will reshape industries and affect every aspect of our lives. So what will the 5G world look like?

More surveillance. Self-driving cars. Control of how you watch sports on TV. 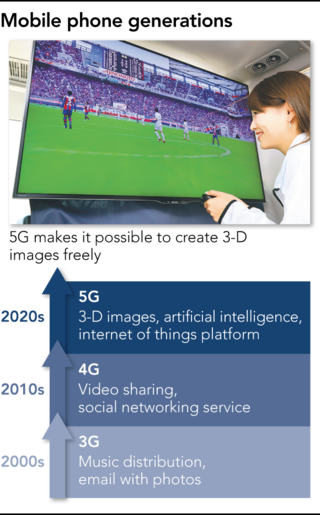 The demo was to see how well the service would be able to handle security for the opening ceremony of the Tokyo Olympics on July 24, 2020. It involved the use of AI and a drone with a high-definition 4K camera and smartphones.

The drone hovers over a crowd of people heading to the New National Stadium for the opening ceremony. With its 4K camera, the unmanned aircraft takes pictures of several thousand people within a radius of 150 meters, then sends the photos in for AI-based analysis.

The AI software identifies suspicious persons using criteria based on 50 indexes, including aggression, degree of tension and stress.

Security guards get notifications on their smartphones. The message reads, "A suspicious person has been found." A security detail spots the suspect and apprehends him. He turns out to be holding a knife.

Eiji Kuwabara, a senior Alsok executive, stressed the importance of 5G technology. "AI and 4K cameras are evolving," he said. "But we cannot use them [effectively] if we do not have a 'nervous system' that can transmit [reams of] data."

5G also holds the key to autonomous driving. On the road, milliseconds can be the difference between life and death.

Due to the latency in 4G networks, a car goes an extra meter or so before its brakes are applied when the vehicle ahead of it brakes.

5G would allow the brakes to be applied after mere centimeters.

In addition to German automakers Daimler and Audi, which belong to the 5G Automotive Association, Japanese carmakers such as Toyota Motor are also aiming to commercialize driving-support functions that exploit 5G technology.

Until two decades ago, mobile phones transmitted only our voices. But when 3G networks took over, they made it possible for our phones to download music and send pictures.

4G, not to mention the proliferation of smartphones, has allowed our handsets to become essential parts of our daily lives. We use them to watch TV dramas and to do our shopping.

5G will link all industries and allow people to freely create 3-D images.

KDDI, another Japanese cellular service provider, is also conducting a 5G-related test ahead of the 2020 Tokyo Summer Olympics:

Video images of a soccer game taken by four superhigh-definition 8K cameras are composed in 3-D and sent to televisions or smartphones.

Viewers don't just sit back; they are thrust into the producer's chair. They pick what camera will relay images to their TVs or smartphones -- and when to switch to another camera. They can even watch the action from the vantage point of a player and feel as though they are on the field themselves.

Apple's iPhone in 2007 heralded the advent of the smartphone age. In the past decade, the U.S. company's market capitalization has surged more than sevenfold, making it the world's most valuable company.

Apple is followed by some other U.S. tech companies, such as Alphabet, the parent company of U.S. search giant Google, and U.S. online retail giant Amazon.com, on the market cap yardstick.

Exxon Mobil and General Electric, which used to be Nos. 1 and 2 by that measure 10 years ago, now take a backseat to the West Coast tech juggernauts.

Major U.S. consultancy Arthur D. Little estimates that 5G technology will unleash a market worth $1.2 trillion in 2026. To get there, the tech sector will likely undergo a restructuring. The new winners will be those who develop services and devices that exploit all that 5G has to offer.

A global mega-competition has already begun.