Japan nuclear parts makers to team up in China market

TOKYO -- Japanese nuclear plant component makers will step up their efforts to sell products in China by forming a consortium and striking deals with a major Chinese nuclear power company. 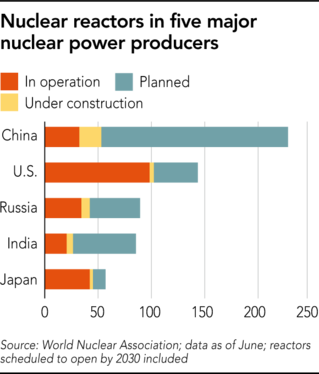 The consortium will create a new company with an investment of 10 million yen ($99,000) by the Japan Engineers Federation, which promotes the transfer of Japanese technology to other parts of Asia. The companies aim to increase Chinese exports to 400 billion yen annually from 100 billion yen at present.

With little hope for new plant construction in Japan anytime soon, the consortium will help the Japanese companies gain a foothold in China's growing nuclear power market as the country continues to build plants. It will handle complex business procedures on their behalf and act as their contact with CNNC.

The new company particularly hopes to assist smaller members that would otherwise find it difficult to crack the market. Its primary role will be to pass along order information from the Chinese company. It will also develop new sales channels, hiring people versed in Chinese business practices as consultants for member companies contracted by CNNC.

Most of Japan's nuclear parts makers are small companies that have trouble handling complicated procedures. This can hamper their business. The consortium will help these companies concentrate on negotiating deals by easing the paperwork burden.

The consortium will also help assuage concerns the Japanese companies have that their Chinese customers will disappear once they deliver their products. Worries that Chinese competitors may obtain their technology and undercut their prices often deter Japanese companies from doing business in China.

To give them peace of mind, the new Japanese company has signed an agreement with China National Nuclear to ensure that supply contracts all run five years or longer, that the intellectual property of Japanese companies is protected and that order information is provided in a transparent manner.

China, for its part, wants a stable supply of high-quality Japanese parts under the deal. The country has been building six to eight nuclear reactors annually and is expanding exports to other Asian countries and South America.

China National Nuclear will create a company by the end of the year that will handle purchases of nuclear power components from overseas suppliers. This company will deal with the Japanese consortium.

According to the Japan Engineers Federation, construction of a nuclear reactor in China costs between $3 billion and $4 billion, of which about half is for components.

Japanese parts currently represent about 10% of overall component spending in China, but the companies hope to raise that to about 40%.

There are about 2,500 nuclear equipment and parts makers in Japan, many of which are finding it increasingly difficult to maintain their skills and technology following the Fukushima Daiichi nuclear disaster in 2011.

The companies also aim to boost sales to companies other than CNNC.