Japan's shipbuilders in hot water as orders dry up TOKYO -- Japan's shipbuilding industry is headed for a slump that may prove worse than the one caused by the 2008 global financial crisis.

The country's shipyards saw new orders for export ships plunge 80% on the year during the first half of 2016, the worst decline since the autumn of 2008.

After a few bumper years of new orders fueled by a weak yen and a spike in demand ahead of stricter environmental regulations, many Japanese shipbuilders are wondering how they can survive this sudden downturn.

On a day in June, workers at the Kure Shipyard of Japan Marine United were busy welding the massive hull block of a large container ship. The human workers were assisted in their task by an army of welding robots.

With a three-year backlog of orders, Japan Marine United is planning to invest to expand its production capacity.

The bustling scene at Kure Shipyard gives no indication of the crisis brewing in the industry.

If new orders dry up, the shipbuilder will find itself without any work to do in two and a half to three years. 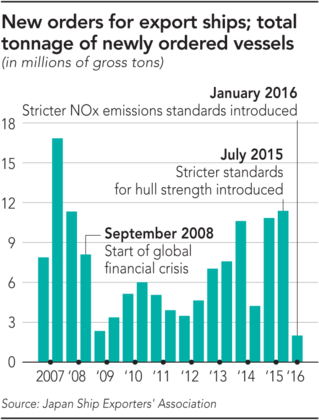 "The situation changed dramatically soon after the new year began, and it's now very bad," said Otagaki. "We have few business talks these days."

Nobutaka Miyawaki, president of Sumitomo Heavy Industries Marine & Engineering, visited Greece in June and met with more than 10 shipowners at a maritime exhibition. None of them showed any serious interest in ordering new vessels.

Kawasaki Heavy Industries has received no new ship orders since the end of October.

From feast to famine

The 80% drop in new ship orders during the first half is according to data released Wednesday by the Japan Ship Exporters' Association. June in particular saw a devastating 96.5% nosedive.

The shipbuilding industry has gone through many ups and downs over years, but the current slump is "worse than the one following the global financial crisis," said Yoshikazu Nakaya, a shipping analyst with Mizuho Bank. "The industry won't recover until 2021," he added, underscoring the graveness of the current slump.

From 2006 to 2008, huge numbers of orders were placed for bulk carriers to transport raw materials to China, where demand for energy was soaring due to the country's rapid economic growth. These vessels were completed and came into service during the global recession, creating a global glut of ships. At the same time, low-cost Chinese shipbuilders were garnering a greater share of the global market. This compounded the woes of Japanese players, which were suffering from the effects of the recession and a strengthening yen.

Then Japan's shipbuilding industry got its second wind. The yen weakened and new ship orders surged ahead of the introduction of stricter NOx (nitrogen oxide) emissions standards in North American waters and some other areas in 2016. Shipping companies and other shipowners were keen to purchase new vessels before the new standards pushed up construction costs.

Riding this wave of new demand, Japanese shipbuilders saw their combined share of the global market rise to 29% in 2015 from 13% in 2013.

But the boom has gone bust, in part due to weaker demand in China and other key emerging countries grappling with economic slowdowns. The Baltic Dry Index, which tracks changing freight costs of dry bulk carriers, has plunged to less than one-tenth of its pre-recession peak. The stronger yen and "hangover" from the flood of orders ahead of the new environmental standards has exacerbated the situation for Japanese shipbuilders.

The Ministry of Land,Infrastructure,Transport and Tourism is taking steps to help the shipbuilding industry weather the crisis, such as providing policy support for shipbuilders planning to introduce internet-of-things technology to improve operations and boost productivity.

But there is a clear limit to what such measures can accomplish. The harsh business conditions have caused one Chinese shipbuilder after another to go under, and South Korea's three leading shipbuilders are scrambling to restructure their operations after reporting losses.

If Chinese and South Korean players turn desperate and start offering deep discounts to survive, Japanese shipbuilders will take an additional hit. And that may spell another wave of consolidation for the industry.