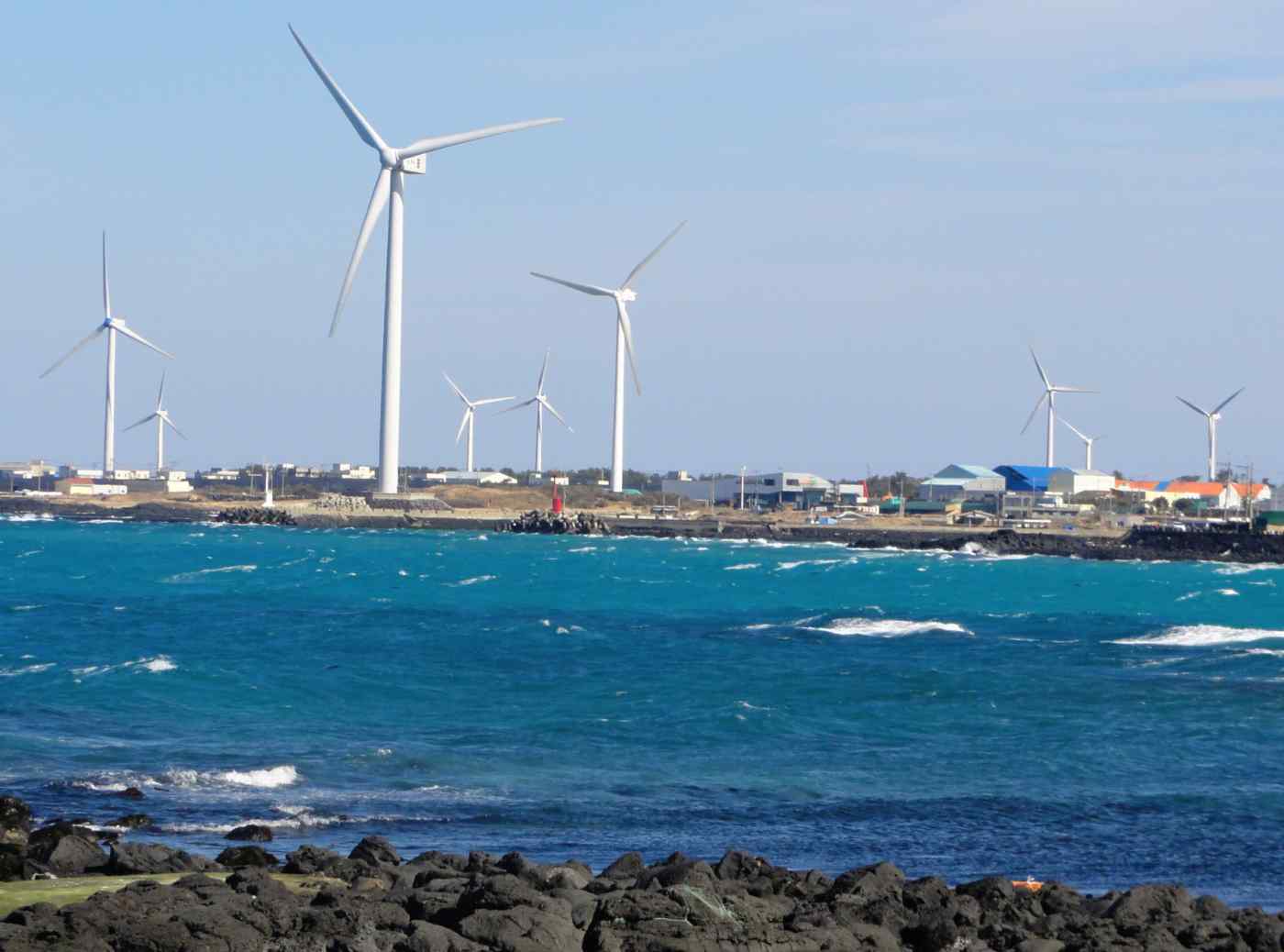 SEOUL -- South Korea's Jeju Island is turning to planet-friendly pursuits to power its economy and reduce its reliance on fickle tourists and agriculture.

The shift in focus comes as the number of Chinese visitors declines, following South Korea's decision to deploy a U.S. anti-missile system known as Terminal High Altitude Area Defense, or THAAD. Beijing, which sees the system as a threat, in early March barred some travel agencies from selling South Korean tours and discouraged citizens from visiting the country.

Regardless of travel trends, the Jeju Special Self-Governing Province -- one of South Korea's nine provinces -- aims to support the livelihoods of island residents by promoting renewable energy and electric cars. Some residents are relieved to have new options.

A local farmer who had cultivated oranges for about 20 years said small-scale growers have a tough time getting by. The U.S.-South Korea free trade agreement implemented in 2012 lowered import tariffs on American oranges, dealing a serious blow to domestic farms. The veteran farmer said he ended up with only 1 million won ($874 at current rates) in annual income, after deducting fertilizer and labor costs.

Last year, he decided to abandon the farming life and signed up for a new solar project pushed by the province. Orange farmers lease their land to South Korean engineering companies, which set up photovoltaic power arrays. The companies sell the juice to Korea Electric Power and pay a portion of the revenue to the farmers.

The engineering companies borrow the funds they need to install the solar panels from financial institutions; the rented farmland is not held as collateral. In other words, the companies and lenders bear the risks. The land is to be returned to the owners in 20 years.

The veteran farmer said he expects to earn 18 million won in annual income. A provincial government official in charge of energy said more than 100 farmers jumped on board last year.

The solar power project stems from Jeju Gov. Won Hee-ryong's drive to make the island a model for the next-generation energy business.

The province has hitherto relied on thermal power for most of its electricity. This, coupled with a rise in the number of cars, has led to complaints about air pollution since the 2000s. Fresh air is supposed to be part of Jeju's appeal.

Won set a goal of using renewable energy sources, such as solar and wind, to meet all electricity demand by 2030. Currently, renewables account for 11% of the island's electricity consumption.

The governor also wants to replace the 370,000 cars currently on the road with electric vehicles by 2030. There are now slightly more than 6,000 electric cars on the island.

Since 2014, Jeju has hosted the International Electric Vehicle Expo every March. The event showcases the latest models from Japanese, German and Chinese marques.

An official of a car rental company said the provincial policy is already making an impact, saying the island's air is cleaner than it once was. However, the official said a fully electric rental car business would be doomed to fail, since existing models have shorter range than gasoline-powered cars. Even using a fast charger, it takes at least 30 minutes to fully recharge an electric car.

The high prices of electric vehicles are another problem. And there are concerns about the reliability of some of Jeju's new infrastructure.

South Korean media last year covered a spate of malfunctions of electric vehicle chargers on the island. The reports said the equipment was not promptly repaired.

Some wonder what will happen if solar power equipment starts breaking down in five or 10 years' time. The local government's active involvement in maintenance may determine the success of Jeju's green transformation.