NAGOYA -- Legoland Japan, the country's first outdoor Legoland park in Nagoya, Aichi Prefecture, got off to a strong start on Saturday despite the chilly and rainy weather.

Some 500 people lined up outside the front gate of Legoland at 7:30 a.m. to wait for its opening. Most visitors are children and their parents as the theme park primarily targets 2- to 12-year-olds.

During the opening ceremony, Torben Jensen, president of Legoland Japan, which operates the park, encouraged visitors to enjoy an exciting day. Lego characters then danced amid flying confetti under fireworks. 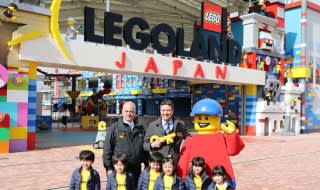 Lego construction toys are popular across Japan. A housewife in Kashiwa, Chiba Prefecture, visited the park with her 4-year-old daughter, on a visit to her parents in Nagoya.

The park is "good because it not only offers enjoyable rides but also has space where children can freely touch and play with Lego toys," the housewife said. "I want to come here every time I return to visit my parents."

Legoland Japan has taken a bullish management stance on the new theme park. Although the park occupies a relatively confined space of around 9 hectares, a one-day ticket for adults is priced high, at 6,900 yen ($62.35), almost comparable with Tokyo Disney Resort's 7,400 yen. Children aged 3 to 12 pay 5,300 yen, higher than the 4,800 yen charged by TDR for 4- to 11-year-olds.

But visitors appeared to have accepted the ticket prices as reasonable. A university lecturer, 41, from Kyoto who visited the park with three children, aged 7, 5 and 2, said, "We enjoyed it, though I thought (the tickets) were somewhat expensive."

A 37-year-old company employee in Nagoya came to the park with his 4-year-old daughter for the third time, including visits to pre-opening ceremonies in March. "I have annual passports (17,300 yen for adults and 13,300 yen for children), so I've already broken even on my tickets. I want to come here every month," he said.

The Robotic Play Center in the park offers a 45-minute workshop to teach computer programming to children, using the latest Lego robot model. As an enjoyable learning experience, the workshop is an effective incentive that encourages parents to bring their children back to the park despite high admission fees.

Unlike TDR and Universal Studios Japan, Legoland Japan has no thrill rides as it is designed for children. Facilities in the park are often painted in primary colors rather than subtle colors preferred by grown-ups.

But adults enjoyed their visits as well. Toshimasa Usaka, a 31-year-old company employee who visited the park with his wife from Kobe, Hyogo Prefecture, purchased a set of special Lego plastic blocks only available there for about 50,000 yen. "I am so happy about my shopping," he said. The operator of Legoland Japan will build a hotel on a lot adjacent to the park at a cost of 10 billion yen in 2018, as part of its project to create a resort area. It also plans to introduce new attractions within the park to encourage return visits.

Nick Varney, CEO of Merlin Entertainments, a British theme park operator and parent of Legoland, said the company positions Japan, the U.S. and China as its key markets. In Japan, Merlin will open more indoor theme parks, he said.

In Japan, Merlin operates indoor Legoland Discovery Centers in Tokyo and Osaka and Madame Tussauds in Tokyo, and is planning to open Sea Life in Nagoya in 2018.

Merlin may be able to operate more than 10 theme parks in Japan in the future, Varney said.

Merlin builds large theme parks, each requiring an investment of more than 30 billion yen, mostly outdoors. Smaller parks of 2,500-3,000 sq. meters, which are constructed at a cost of around 1.5 billion yen, are built indoors.

The indoor parks are mainly located inside shopping malls and other facilities in urban centers.