For years, Wynn Resorts, Las Vegas Sands and MGM Resorts International have been making large investments in the Chinese territory. A steady flow of cash-rich mainlanders has made the place the world's biggest casino market. In the October-December period of last year, however, the U.S. companies suffered sharp drops in earnings from their Macau operations.

Wynn Resorts, which generates roughly 70% of its revenue in Macau, logged a 25% year-on-year fall in sales to $1.13 billion during the period. Net profit came to $109 million, a roughly 50% drop from the previous year. By region, Wynn's operating profit in Macau tumbled 45% on the year; an 8% increase in Las Vegas was not enough of a cushion.

Stephen Wynn, the company's chairman, told reporters during an earnings conference call that the management environment was tough in the last quarter of 2014.

Las Vegas Sands, which boasts the biggest sales among the trio, saw the figure slip 7% on the year in the same period. Sales in Macau declined 16%; the Asian gambling hub accounts for a little more than 60% of the company's total.

The news was not all bad for Las Vegas Sands: Its Marina Bay Sands resort in Singapore posted strong revenue growth. And efforts to rein in operating expenses contributed to a double-digit gain in net profit. 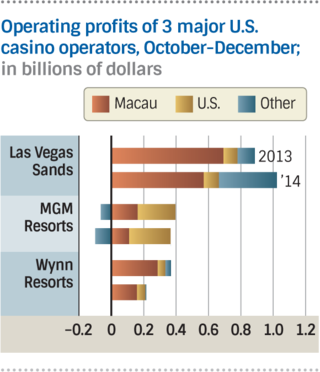 MGM Resorts still takes in about 65% of its sales in the U.S., making it less susceptible to Macau trends. Solid domestic demand limited the company's sales decline in the quarter to 5% on the year. Nevertheless, its net loss swelled on the year due to a rise in tax-related expenses.

China's economic rise drove the growth of Macau's casino sector, making the territory an irresistible target for the American companies. Their home market had become somewhat saturated, and the economic downturn after the 2008 global financial crisis further dimmed their domestic prospects.

Over the years, they have placed big wagers on the Chinese special administrative region. But the Macau gambling market was starting to show signs of decline last summer, due to China's slowdown as well as Xi's curbs on corruption and lavish spending by officials. The presence of Chinese high rollers has decreased significantly.

Making things even more challenging, Macau casinos banned smoking on their gaming floors for regular customers last October. This put off some gamblers from the mainland.

On the bright side for U.S. casino operators, the domestic market has taken a turn for the better. Stateside operating profits at both Wynn and Las Vegas Sands grew 8% on the year in the October-December term, while MGM Resorts' figure jumped 10%.

Analysts still think Macau has ample room for growth over the long run, with China's economy continuing to expand. Even so, the effects of Xi's policies are likely to linger. Credit Suisse said it will take time for Macau gambling revenues to recover.

Casino operators are on the lookout for opportunities elsewhere. Las Vegas Sands Chairman Sheldon Adelson, on a conference call with reporters, said his company will carefully consider the possibility of entering Japan, South Korea and Vietnam.