SARAWAK, Malaysia -- Japanese steelmakers are starting to diversify their suppliers of ferroalloys, which are key ingredients in steelmaking. They have been heavily reliant on imports from China and India, but the future supply from the two countries is far from secure and could shrink.

One high-potential newcomer is Malaysia, and Japanese manufacturers and trading houses are keen to collaborate with local partners to set up ferroalloy factories there.

Samalaju Industrial Park is located an hour's drive from central Bintulu in the state of Sarawak on Borneo island. Pertama Ferroalloys, a local joint venture involving foreign partners -- including Nippon Denko, a major Japanese ferroalloy smelter -- has spent some $400 million to build a ferroalloy plant there.

The factory's six new electric furnaces began operation last year, and another two units will be ready by the end of this year.

Global players are now rushing to launch ferroalloy factories in the industrial park -- largely lured by the site's inexpensive power supply. Under the leadership of former Malaysian Prime Minister Mahathir Mohamad, a huge hydro dam was constructed in the region, allowing plant operators there to enjoy low rates for electricity -- about half the price in China or India, according to Pertama General Manager Andrew Talling. 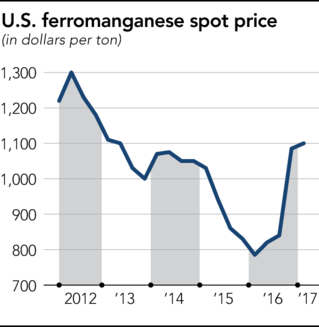 The Pertama plant manufactures ferroalloys such as ferrosilicon, which is used for removing oxygen during steelmaking, and ferromanganese, for increasing the hardness of the steel, as well as silicomanganese. About 30% of the steelmaking ingredients produced at the plant will be  shipped to the Japanese market.

The ferroalloy market had been in a slump for a while, due to prolonged weak demand for steel in China. But it began picking up in autumn last year. Ferrosilicon prices, for example, have recovered from their lows of around $800 per ton to the current $1,100 or so, motivating smelters to build new furnaces. At the current rate, smelters in Malaysia appear to be making a margin of more than $200 per ton of ferrocilicon production.

OM Materials (Sarawak), in a project involving Japan's Hanwa and JFE Steel, is also building furnaces in the industrial park. The first 14 furnaces, among all planned units, are scheduled to be online by June, to be capable of a combined output of 400,000 tons or so of ferrosilicon, silicomanganese and others annually. These will soon start to be exported to Japan's JFE Steel and other steelmakers.

Ferroalloy production in Malaysia is prompting high hopes from global steelmakers who are trying to end their heavy reliance on imports from China and India. China accounts for roughly 70% of global ferrosilicon production, but its exports of the alloy will likely decline. Beijing is increasingly demanding that the country's electric furnace operators take measures to help ease worsening air pollution, including controlling production output. The government has also imposed export tariffs on ferroalloys to push companies to allocate more of the metals for the domestic market.

Meanwhile, India has been a major supplier of silicomanganese for Japanese steelmakers, but the future of the country's exports of the metal is becoming uncertain, too. Electricity accounts for 50-70% of the production costs of ferroalloys. As a result, smelters from countries where power is relatively expensive have been virtually eliminated from the market.

As the economy grows, electricity costs in India are surging, and ferroalloy smelters in the country might not be able to secure enough power supply in the near future. In addition, the country's crude steel production is on the rise, and like what is happening in China, ferroalloy smelters could be encouraged to put priority on domestic demand.

The move follows a trend in which China and India have been shifting from largely exporters to importers of natural resources.