Nawab Khan in his shop with a fan powered by a blue battery box on the shelf behind it (Photo by MEGHA BAHREE)
MEGHA BAHREE, Contributing writerApril 1, 2015 13:00 JST | India
CopyCopied

MATHURA, India -- Salma Khan, a petite, young woman, shows off her one room store where she sells food products such as lentils, flour, packaged noodles and biscuits. She is particularly pleased about two recent additions to her tiny village shop. In the midst of the stacks of groceries is a pedestal fan that helps her combat summer heat of above 40 C, and high on the wall in one corner is a foot-long fluorescent light. Both are powered by a battery connected to a solar panel on the roof of the shop.

Simpa Networks, a company headquartered in Noida, a vibrant business district near New Delhi, supplied her with the energy pack that came equipped with lights, a small fan and ports that can be used for charging two mobile phones.

It is not cheap. Customers have to make a down payment of 2,500 rupees ($43.2) and then pay monthly installments of about 780 rupees over 28 months before they get to keep the kit. But in a country where about 400 million people have no access to power, Companies like Simpa are playing a crucial role in bridging the "power gap" in a country with a notorious infrastructure.

For every household in India to have electricity, 750 houses need to be connected every hour for the next 10 years, according to Arunabha Ghosh, founder of Clean Energy Access Network, an alliance of businesses taking clean energy to the nation's poorest communities. "That's the kind of challenge and opportunity we're talking about," he said.

"There's a correlation between being off-grid and being poor," said Nikhil Jaisinghani, co-founder of Mera Gao Power (Hindi for My Village Power). It is another startup that takes solar power to villagers in Uttar Pradesh. He said the "microgrids" set up by his company reach rural villages, unlike the national power lines.

There are roughly 250 such companies operating in India and most are tiny and unprofitable. Solar power companies have an additional hurdle -- during monsoon season, their products cannot charge to full capacity and customers often complain. 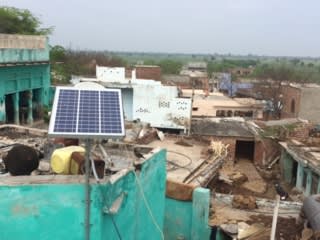 Yet some of them believe they are on the path to a sustainable business model. Simpa, for example, started out in 2011 and it now has several branches that are profitable even if the company itself -- still investing heavily -- is not.

Most of these companies buy existing technology and bundle it up at affordable prices to encourage potential customers to replace kerosene lanterns and candles with solar power. They offer a variety of solutions ranging from solar-powered lights to setting up solar power microgrids that can power a hamlet of up to a hundred homes.

Salma, 21, and her husband Nawab Khan, 25, are typical beneficiaries of this service. They live in Son, a village in the northern Indian state of Uttar Pradesh, India's largest and one of its poorest.

Of its 33 million households, only 12 million have electricity. Twenty million rely on kerosene and 67,000 are too poor even for that, according to government data.

The Khans used to count themselves lucky for being on the grid, even if they only had power for less than five hours a day, and certainly not every day. They often had to rely on kerosene lanterns and candles to get through their evening chores. That all changed three months ago when they bought Simpa's energy pack, along with around 50 others in their village. It came with three lights. Apart from the one in the store, a second light is installed in the room where their four daughters sleep, while the third is on their veranda.

"Earlier the house would get black with soot from the kerosene lamps," said Salma. "Now it's clean," she said, pointing to the smooth, blotch-free ceiling. A door from the children's room opens out into the courtyard, where the toilet is. The illumination from the light in the children's room is strong enough to brighten the courtyard and she no longer has to take her youngest daughter, eight-month-old Nahira, to the bathroom in the dark. Nor does she have to worry about the kerosene lamps being tipped over by her children when they play.

Shyam Singh, another resident in Son village, said his four daughters could study before they go to school at half-past six in the morning now that they have a Simpa-powered light.

Singh, who runs a drugstore in Son, said his home was supposed to be connected to electricity but the power has never worked. "Now, I don't even remember that we have it," he said.

Simpa currently has close to 7,000 customers in the state and is adding up to 1 thousand a month.

MGP, Jaisinghani's company, focuses on hamlets of up to 1 hundred households. It constructs a microgrid by stringing together two solar panels within 90 meters of a village and then puts up distribution lines to connect the grid to the homes. Every home in the village that has signed up gets lights and mobile phone chargers for a one time connection fee of 50 rupees and a weekly service fee of 25 rupees. And all of this takes just day to set up.

"It's not a household solution, it's a village solution," said Jaisinghani.

It has so far wired up 1 thousand hamlets or about 17,000 homes across Uttar Pradesh.

Another company, OMC Power, offers a different model altogether. It was set up by former executives from the telecom sector and it provides solar power to telecom towers in rural India. Telecom companies become their "anchor customers" and it piggy-backs on that business to offer solar power to villages in the vicinity of the towers. Now, two-thirds of its revenues are coming from  those rural households.

These products need to be recharged every night and the company uses a "milkman delivery model" to serve its customers, says Anil Raj, chief executive and co-founder of OMC. Every morning, OMC delivers to each household a fully-charged lantern or bijli box to replace the depleted one.

He said India's solar sector today resembles the country's telecom sector back in the mid-1990s, when that was just opening up. "And it has as much, and maybe even more, transformative power as the telecom sector," Raj said.