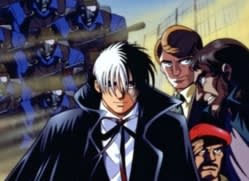 TOKYO -- Legendary Japanese manga artist Osamu Tezuka's "Black Jack" will be made into a movie in China in late 2017 or afterward.

So how does a Japanese comic book about an unlicensed surgeon who saves patients with terrible diseases become a Chinese movie?

Osamu Tezuka published "Black Jack" in 1973, at a low point in his career. The works of his rival, Ikki Kajiwara, had taken off while his own stories languished. The release of "Black Jack," a dark social commentary, marked his comeback.

The story was later made into live-action film and TV dramas. There were also animated versions for TV and film. Tezuka's company took a flexible attitude toward remaking the original, turning "Black Jack," in its various guises, into a cash cow.

The Chinese movie version of the manga is a first. According to the contract, Beijing Enlight Media will make 13 one-hour internet movies using Chinese directors and actors. They will be released as early as the end of 2017. The story is currently under review and Tezuka Productions will have a hand in checking storylines, characters and settings. "It costs about 30 million yen to 60 million yen ($290,000 to $581,000) to make one movie," said a representative of Access Bright Japan, a company that acts as an agent for Chinese clients.

Beijing Enlight Media also plans to make a movie for cinematic release, probably with a different director and actors. The company is expected to spend about 1.2 billion yen on the film.

So why did Beijing Enlight Media want to bring "Black Jack" to a Chinese audience?

"In China, where the number of wealthy is increasing as the economy grows, it is not unusual to pay extortionate fees for high-quality medical treatment," said a Tezuka Productions representative. "It seems they thought such a realistic backdrop and content that reveals the dark side of society and people would be popular with Chinese audiences."

China's entertainment market is expanding rapidly and the country does not have enough original content to meet demand. Japan's manga stories are a gold mine. China also restricts the import of foreign movies. But the restrictions do not apply to Chinese companies making films in China.

Tezuka Productions is eager to take full advantage of its library. Its openness to new adaptations of its stories makes it an ideal partner for content-hungry Chinese companies. "China's entertainment market is much larger than that of Japan and has grown at a breakneck pace. I was surprised when Chinese companies told me not to worry about budgets," said Yoshihiro Shimizu, general manager of Tezuka Productions' licensing division.

"Some market watchers are saying that China's economy has peaked out, citing the slumping real estate market and sluggishness in the manufacturing sector due to rising labor costs. But Chinese companies are remarkably active as far as the entertainment industry is concerned."

An increasing number of Chinese began coming to Japan to seek the rights to manga stories a few years ago. Tezuka Productions "discussed business with about 30 representatives of Chinese entertainment companies last year," said Shimizu.

Shimizu said there are also inquiries about Tezuka's more controversial works, such as "Fushigi na Melumo" (Marvelous Melmo), a sex education story, and "MW," a comic that depicts a homosexual serial killer. Chinese content buyers are also flocking to Japanese publishers in their search for compelling stories.

Japan's anime industry faces a dilemma in trying to tap overseas markets. Japanese anime production companies have racked up more than 60 billion yen in sales for TV stations over the past few years, shrugging off the 2008 financial crisis. Meanwhile, overseas sales have remained below 20 billion yen. Anime aimed at adults, which airs at night in Japan and lies behind the rising domestic TV sales, is more of a niche product overseas. Hits in Japan do not always translate well.

Although Japan's manga makers are enjoying an unprecedented boom at the moment by selling the rights to their works, Shimizu is keeping a watchful eye on the industry.

"The copyright [sales] business may work for some time, but I'm pretty worried that the number of talented overseas creators may grow," Shimizu said. "Chinese creators are rapidly catching up with their Japanese rivals by learning about settings and storylines based on Japanese originals. One hundred percent Chinese entertainment content may become a hit in Japan sometime soon."