"She used to hand carry back Brazilian and African beans and process them with a mini-roaster," recalled her son, Thu Zaw, who now heads the family's Sithar Coffee Company.

Since then, and amid the rapid opening of Myanmar's economy, high-end coffee culture has kicked off in a big way. New cafes are opening in Yangon each month including foreign chains. Local coffee growers have been upgrading their product to cater to domestic demand and target an emerging niche export market for what's known as specialty coffee, and that's starting to pay off. On Jun 19, Myanmar exported its first shipments of specialty beans to the U.S.

With production still tiny, at somewhere between 2,000 tons, according to estate owners, and over 7,000 tons a year, by the government's estimate, Myanmar will likely never approach the output of coffee powerhouses such as Vietnam, which exports 1.5 million tons of coffee a year. But its prospects for capturing a slice of the high-end market are starting to perk up.

Before the mid-1990s, it was almost impossible to find a decent cup of coffee in the former capital of Yangon, another thing to blame on the legacy of the tea-drinking British colonialists.

"I opened Fuji because I personally love coffee," said Tin Tin Win. She sold Fuji Coffee House in 2010 when she and her husband moved to Pyin Oo Lwin, a hill town in the highlands east of Mandalay, to be closer to the family's coffee plantation and to open a new cafe -- Pan Taw Win Restaurant.

Her son Thu Zaw, 35, joined the family coffee business in 2007 after attending school in the U.S. and spending a few years working for international trading companies in China. 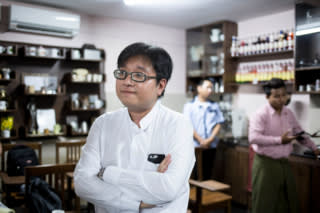 The cooperative is based in Pyin Oo Lwin, one of the main coffee production areas, and accounts for about 500 tons of green coffee beans a year.

Although coffee has been grown in Myanmar since 1885, when Christian missionaries planted the crop in Mergui and Tavoy (Dawei), in the country's south, it never took off as a sizeable cash crop.

In 2004, the then junta-run government pushed for more coffee cultivation to diversify Myanmar's agricultural production, allocating 100,000 acres of land in Pyin Oo Lwin to be leased out at low rental rates to estates and farmers. The former British hill station is more than 1,000 meters above sea level, with good rainfall, making it suitable for Arabica beans, which fetch higher prices on the world market.

Sithar has been producing its ground coffee brands from its Pyin Oo Lwin estate since 2008. For a while, it struggled to maintain consistent quality standards because of rudimentary machinery and poor growing techniques. That changed last year when the Mandalay Coffee Group co-invested in a wet mill, which is used to remove the bean from the coffee cherry,  for about $500,000 and other processing equipment.

"Now, with the upgraded centralized machinery we can upgrade the quality of our washed beans," Thu Zaw said. The mill has also been opened for use by small scale farmers to offer them a market outlet for their crop. "Mandalay Coffee Group with our partners across the industry are financing small villages around Ywa Ngan to process coffee to hit the specialty segment," he added. At last year's cupping event, only 20 of the 60 contestants scored above 80 points. At a second cupping event held in March, thanks to training and better equipment, 56 of the coffees were graded 80 and above and the highest score was 87.08 points, going to Green Land Coffee estate, one of the largest estates in Pyin Oo Lwin.

The second-highest scorer was a lot from the Ma Mi Nyo smallholder community in Shan State which gained 86.75 points. The high scores translate into higher prices for their coffee beans. "Under these schemes a farmer can receive a premium price for ripe red cherries and receive additional premiums once the coffee has been processed and sold as green beans," said Stephen Walls, chief of party of the USAID-funded Value Chains for Rural Development project. Specialty green beans attract prices 20% to 50% above commodity grade Arabica. Specialty coffees can also be exported at prime prices. After the second cupping competition held in Pyin Oo Lwin, two buyers in the U.S. ordered 36 tons of Myanmar coffee beans that were shipped in June, destined for distribution to coffee shops on the West and East coasts.

"Specialty is still very early, but it is coming," Thu Zaw said. "We have started to test our export potential."

Sithar Coffee Company has set an export target this year of 50 metric tons to clients in the U.S. and Switzerland. Myanmar coffee has been exported in the past, primarily to neighboring China where its fetches the commodity grade price of between $3,500 and $4,000 a metric ton. Specialty grade coffee beans sell for at least $6,000 a ton and up to $12,000 a ton if fully processed and ground. 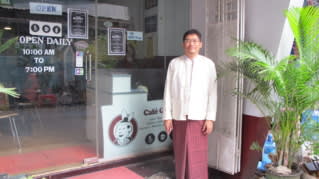 Aung Nay Lin Htun Company, producer of Genius brand ground coffee, has set a goal to export 25 metric tons of specialty beans to the U.S., South Korea and Taiwan this year. The company, founded in 2012 by Myanmar entrepreneur Ngwe Tun, set up a wet mill in Ywa Ngan in 2013 and has been buying coffee beans supplied strictly by smallholder coffee growers in the Ywa Ngan township area. "For commodity grade Arabica we pay about $3 per kilogram, but if they can upgrade to specialty we pay between $3.50 to $4," Ngwe Tun said.

Genius Coffee has also applied for organic certification for a 70-acre plot of coffee trees cultivated by 50 smallholder farmers from Control Union, a global network of inspection operations that set up an office in Myanmar in 2013.

"If all goes well it will be the first group farm to get organic certification in Myanmar," said Rashan Ranawake, the managing director of Control Union/Myanmar. The inspector has already provided organic certificates to the Arrow Brothers Company, which runs a small coffee estate in Mogok, a northern township in central Myanmar better known for its rubies than coffee. "Their coffee is special because it's Arabica Catimor, which is rare, and it's from Mogok, which is also rare," Ranawake said.

Meanwhile in Yangon, Sithar Coffee has started a barista training course for disabled people. Besides providing career skills for some of Myanmar's unemployed disabled population, the trainees will also help the Sithar group enhance its own quality standards. "Coffee is delicate," Thu Zaw said. "From the harvest to processing to roasting to how you make coffee as a barista, to cupping, each step is important."

Sithar Coffee is still primarily catering to the growing domestic demand for quality coffee from the recent proliferation of upmarket coffee shops in Yangon, including the entrance of foreign chains such as Australia's Gloria Jean's Coffees and Thailand's Black Canyon and True Coffee.

"My worry is our coffee quality is going up and we are starting to export coffee. But do we want to export all the good coffee out of the country and only import poor quality instant coffee for locals to consume? So we'll have to balance it out," Thu Zaw noted.

In the broader scheme of things, it is not a bad problem to have.