Myanmar's nascent insurance market is not for the impatient YANGON -- To maintain retirement insurance in Myanmar, people have to go through a yearly hassle. They must line up at the headquarters of state-owned Myanmar Insurance -- a building in the capital's financial district with a dark, muggy lobby -- to pay their annual premiums and renew their policies.

But this is likely to change in the years to come.

As Myanmar's economy takes off, the country's insurance sector is undergoing significant changes. Soon, renewing a policy will be automatic. Finding a policyholder's contract will be done with a few strokes at a keyboard, computers taking care of the rest. No longer will workers have to rifle through piles of paper. As a result, fewer people will be waiting in the reception area.

Myanmar's insurance sector will accomplish in years what Japanese insurance companies spent decades refining. In fact, it is absorbing technologies and tactics from Japanese insurers.

Although the nation's insurance market was opened to private domestic companies in 2013 -- and the sector grew from one insurer to 13 in that time -- change seems to have accelerated within the past several months. In July, the domestic insurers began offering medical coverage for individuals. Not only are these policies new to Myanmar, they have given insurance a function other than simply helping policyholders build nest eggs.

Three Japanese insurance companies -- the only foreign insurers allowed to operate in the country -- have opened branches.

Customers are pleased to see more competition. "Myanmar Insurance has been slow and inconvenient when it comes to payouts," said U Nyi Nyi Aung, a taxi driver. "We don't immediately get the money we are supposed to get, even if we file a claim. Private companies are quicker and more convenient, so the overall insurance market will improve."

There is a long way to go. For most of Myanmar's 50 million people, insurance is way down on the list of priorities, if it is there at all.

Last year, there were only about 700,000 life insurance policies in Myanmar, according to Asia Insurance Review -- one-twentieth the number in Japan, where the population is 2.5 times larger. "Most of the policies are likely endowment insurance, which policyholders use as a way of saving money for retirement or for their children's education, rather than managing possible risks," said Tomikazu Hiraga, executive research fellow at NLI Research Institute.

Demand for insurance tends to coincide with economic maturity. "As in Japan and China in the past, demand will appear only after Myanmar's living standards rise to the point where people start thinking about protecting their assets and planning for future contingencies," Hiraga said.

Still, Myanmar's economic progress is piquing the interest of not only Japanese insurers but also companies from the U.S., Canada, Taiwan and South Korea. Some international players have set up offices even though they are not yet authorized to sell policies.

With so many big fish circling, how did the three Japanese companies secure the first licenses? 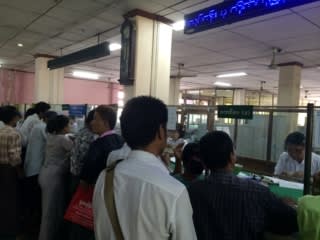 People wait at the reception of Myanmar Insurance's headquarters in Yangon.

One of the key factors was length of time in the country.

Sompo Japan Nipponkoa Insurance, Tokio Marine & Nichido Fire Insurance and Mitsui Sumitomo Insurance, which received permission to operate in Yangon's Thilawa Special Economic Zone, originally opened offices in Myanmar in the late 1990s. They waited patiently through the country's years under economic sanctions, and despite lacking permission to do business.

This, Deputy Finance Minister Maung Maung Thein said at a ceremony, made the trio "the most trustworthy" in the eyes of the government.

The authorities also recognized the support Japanese companies have offered, with no immediate benefits for themselves. Sompo Japan Nipponkoa, for example, has worked with the government to develop insurance that covers drought damage to crops.

Taiyo Life Insurance, which has a representative office in Myanmar but not yet a sales license, has teamed up with the government to develop the health insurance system. In July, it became the first foreign company appointed as an official consultant to the project. Taiyo Life's involvement includes sharing know-how on data management and calculating premiums.

Japanese companies have shown a knack for fitting in, too. "Now I blend in so well that local people talk to me in their language," said Takeshi Shimada, chief representative at Taiyo Life's Yangon office. He was wearing a longyi, a traditional outfit.

When Shimada first arrived in Myanmar in 2013, he would wear a longyi whenever he met with government officials. He did it to show respect, hoping it would help him build good relationships.

One day, he happened to be wearing a regular business suit when he ran into one of his contacts. The official gave Shimada a sad look and asked if he had stopped wearing his longyi altogether.

"I still remember that sad face," Shimada recalled. "That was the moment I made up my mind to wear a longyi every day."

The risks and challenges are, indeed, myriad. Aside from developing financial infrastructure and training staff, one of the biggest tasks is simply spreading the word about the insurance concept.

Today, policies are mainly held by military personnel and government employees. "Most people in Myanmar don't even know what insurance is," said Aye Min Thein, managing director of Myanmar Insurance. He said there are plans to start teaching about insurance at the "early stage of public education," and he hopes foreign insurers will help with these efforts.

Clearly, Myanmar's nascent insurance market is not a place for making quick cash. Not only does it take time to gain trust, but fundamental issues still need to be tackled. Patience, however, could pay off handsomely.