MANDALAY, Myanmar -- The Southeast Asian nation of Myanmar is making waves in the coffee business, thanks to a climate and topography that lends itself to coffee growing and new technology from abroad that has improved the quality of its beans.

This has brought Myanmar recognition as a producer of high-grade, "specialty" coffees with unique flavors.

In early February, 35 members of the All Japan Coffee Roasters Association, an industry group, visited a processing plant in Pyin Oo Lwin, a highland village 1,100 meters above sea level about 70km east of the central city of Mandalay. The visit was led by Yutaka Shibata, president of Key Coffee.

Mandalay Coffee Group, founded in 2014, runs the plant. It has two functions, one of which is to process the beans. It collects coffee cherries from farmers in the area and the neighboring state of Shan. The red fruit is stripped of its pulp -- a layer just beneath the outer skin that encases the bean -- dried and milled. Various steps in processing create flavors unique to each type of bean.

The other function is to evaluate the quality of the beans. With the help of experts from the Specialty Coffee Association of America, the company has developed ways to process coffee cherries from each farm separately and classify them.

One method is "cupping," evaluating the aroma and flavor of brewed coffee under set conditions, a bit like a wine taster does with wine. During the visit by the Japanese group, one participant tasted several coffees, describing their flavors with phrases such as "a waft of sweetness like chocolate or nuts," and "bright acidity similar to apple or lemon." Once standards were in place, quality began to improve. In 2016, Myanmar produced its first coffee variety to exceed 80 points on the SCAA cupping scale and was designated a "specialty coffee."

Myanmar has a long history as a coffee producer, growing both high- and low-grade beans, according to Amy VanNocker, an SCAA expert sent to work with Mandalay Coffee Group. By putting in place clear evaluation criteria, selection of beans became stricter and quality improved quickly, she said.

In richer consuming countries, there is growing interest in premium "third wave" coffees brewed to bring out the unique characteristics of the beans. And demand for coffee grown in exotic locales is rising. Myanmar beans have caught the eye of coffee companies in the U.S., Europe and Japan.

Just a few years ago, almost no one considered Myanmar a serious coffee-growing country. But that is changing: "I got a strong impression that [Mandalay Coffee Group] was introducing new methods one after another, to try to catch up with the world" Shibata said after the touring the plant.

As demand has risen, so has the price of Myanmar's beans. According to a local newspaper, the price of beans for export has more than doubled versus two years ago to $3,000-$7,000 per ton. 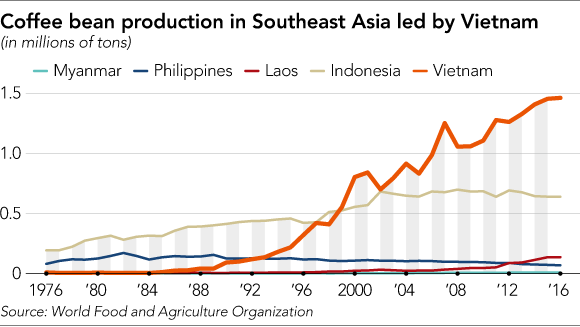 But the country's production is still dwarfed by that of its neighbors. In fiscal 2016, it produced 8,500 tons, compared with 1.7 million tons in Vietnam and Indonesia's 650,000 tons, according to Myanmar government data. The government hopes to increase the amount of land under coffee cultivation to 80,000 hectares by 2030, up from 12,000 hectares at present, turning coffee into a major export. 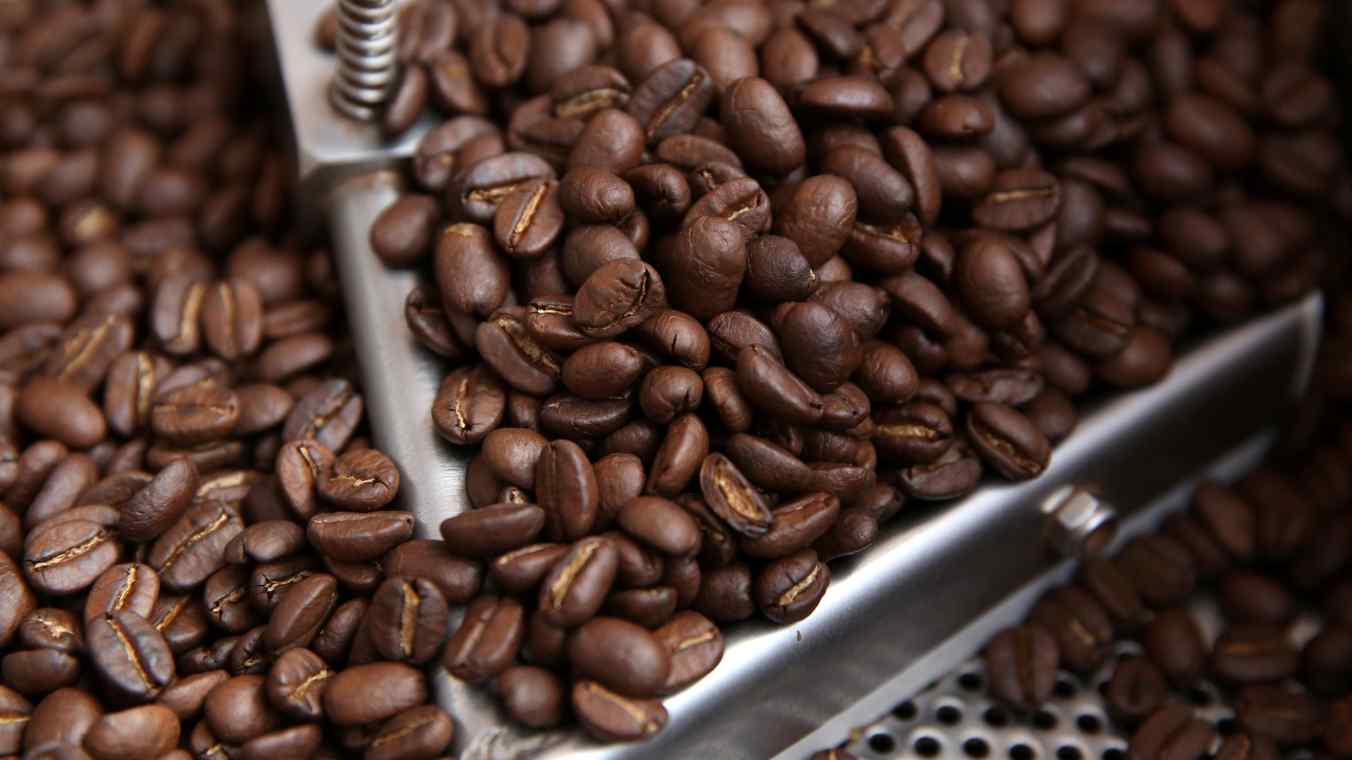 Coffee bean output has been increasing globally, particularly in Southeast Asia. According to the U.N.'s Food and Agriculture Organization, worldwide production grew 13% between 2006 and 2016, to 9.22 million tons.

In Southeast Asia, production expanded nearly twice as fast, rising 25% during the same period, to 2.36 million tons in 2016, thanks to rapidly growing markets such as China. The region now accounts for a quarter of global output and it grows twice as much as Africa, where coffee is thought to have come from.

Vietnam is a rising star. Its production has risen by a factor of 58 in the last 30 years. The country overtook Indonesia and the Philippines in the 1990s and is now the world's second-largest producer, after Brazil. Laos is also gaining ground, more than doubling production to 140,000 tons versus five years ago.

Though Myanmar's specialty coffees are increasingly drawing attention, "output is way too small" for big coffee companies to use in their blends and other products, said Key Coffee's Shibata.

The problem is productivity. According to the FAO, Myanmar's output per hectare is only around 26% that of Vietnam's. However, the country has a vast amount of highland suitable for coffee farming. With better technology from overseas, the coffee industry could flourish.