YANGON -- Investment in agriculture by private companies is increasing in Myanmar, raising expectations that the modernization of the sector will progress at last.

Myanmar Agribusiness Public Corp. (Mapco) has built a large rice mill in a bid to boost exports of rice, while Myanma Awba Group has launched a project to build an agricultural chemical factory.

The new Myanmar government led by Sate Counselor Aung San Suu Kyi, who positions agriculture as the country's core industry, is stepping up support to facilitate investment in the sector such as improvements in agricultural finance.

In March, Mapco will begin operating a rice mill in Kyaiklat, a town in the Ayeyarwady division in the southern part of Myanmar, capable of processing 450 tons of rice per day. It spent 9 billion kyat ($6.66 million) to build the mill, which is the biggest in the country.

The new facility will triple Mapco's processing capacity as it is currently operating a mill with a daily capacity of 220 tons in the Myanmar capital of Naypyitaw.

Mapco was founded in 2012 with the backing of the government to promote agriculture in Myanmar. It buys rice from domestic growers, then wholesales and exports the staple. This Mapco rice mill in Naypyitaw began operating in the summer of 2015. Mapco is preparing to accelerate the construction of rice mills.

Although Myanmar is a leading rice producer in Southeast Asia, it has yet to develop polishing and other processing infrastructure due to delays in the work during the period of military rule. Broken rice thus accounts for a large portion of its output. The export competitiveness of rice produced in Myanmar is weak because of its inferior quality compared to rice grown in Thailand and Vietnam.

China, the biggest importer of rice from Myanmar, toughened crackdowns on land-based smuggling of rice last year. In Muse in northeastern Myanmar where 90% of cross-border trade between the country and China takes place, the border was temporarily closed due to armed clashes between Myanmar government troops and ethnic minority fighters.

Exports of rice from Myanmar in fiscal 2016 therefore are expected to decrease 20% to 30% from the previous year.

The rice mill in Kyaiklat is a modern plant equipped with a parboiling system that steams rice husks before milling to make the staple resistant to breaking. 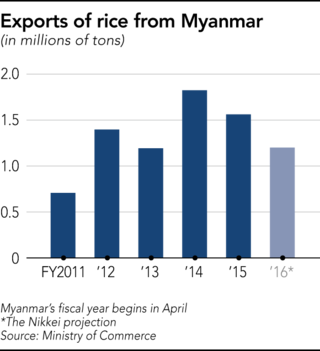 As demand for parboiled rice is strong from Africa, South Asia, Russia and other consumers, the new mill is expected to help increase exports from Myanmar to markets other than China.

Mapco has exported 150,000 tons of rice since 2012. With the new rice mill, it plans to export 100,000 tons or so per year starting this year, including shipments to new markets such as the European Union.

Myanma Awba will start building a large plant in Yangon, the biggest city in the country, in March for production of chemical agents to protect agricultural products from diseases. The company, which has already won a permit for the investment from the government, received a loan of $10 million from International Finance Corp., a member of the World Bank group, last year.

Capable of supplying disease-prevention agents to some 3 million farmers, the new chemical plant, when completed in 2020, will be able to meet half of domestic demand for such agrichemicals, according to Myanma Awba.

Founded in 1995, Myanma Awba is a conglomerate producing and selling agrichemicals, fertilizers and seeds. It also began microfinance services for farmers in 2012.

Small-scale farmers, who dominate the agriculture sector in Myanmar, cannot afford large investments. The use of urea and other basic fertilizers, therefore, is only one-tenth of the amount in Thailand.

Myanma Awba will help modernize farmers' operations by promoting the sale of farming products in combination with microfinance services.

Myanmar is an agricultural country, and 70% of its population resides in rural villages. Balanced development between the agricultural and industrial sectors and an improvement of financial services for farmers are among 12 priority areas in an economic policy announced by the government in July last year.

Rice has been positioned as a key export item under the policy which also envisages agricultural organizations tripling exports of farm products to 4 million tons by fiscal 2020 from fiscal 2015.

To support Mapco's business, the government is considering upgrading the railway system for transport of rice and easing terms for small-lot loans to farmers from public financial institutions.

Opportunities to expand business operations are increasing for agriculture-related companies in Myanmar.