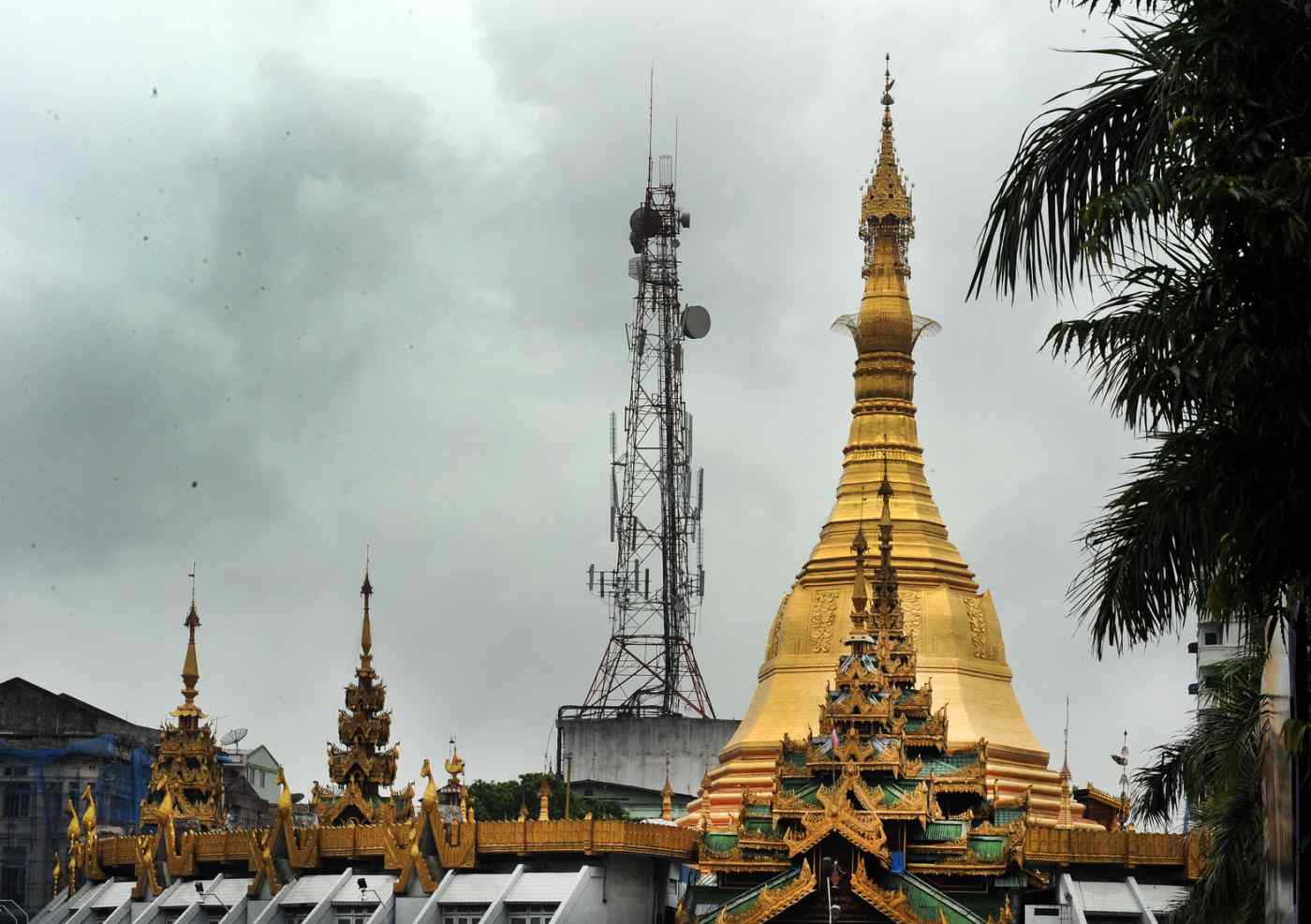 YANGON -- From remote mountain villages to ramshackle country towns, wireless towers are rising rapidly across Myanmar as the country's new mobile telecommunications system takes shape. But just off bustling Banyar Dala Street in central Yangon, Ma Kyi sits patiently at a table on the sidewalk on a hot morning, waiting for customers to use the two Chinese-made landline telephones sitting beside her. A Yangon resident uses one of many privately operated street phone stalls. (Photo by Steve Tickner)

The phone cords run up into a nearby tree, from where they are manually connected to a city telephone line. For the equivalent of five cents a minute, local residents can call family members or friends upcountry. "Some people don't like to be overheard, so I pretend not to hear anything," Ma Kyi, who contracts her services to the government, says with a smile.

This is Myanmar's version of a pay phone -- and its days are numbered.

A year after Myanmar's reformist government granted two foreign telecoms operators rights to enter one of Asia's last largely untapped telecom markets, Qatar's Ooredoo and Norway's Telenor are preparing to launch high-quality 2G, 3G and 4G mobile services by September. The total effort will cost billions of dollars. Telenor expects to invest an initial $1 billion in rolling out its network; Ooredoo is promising to pour $15 billion into Myanmar over the next 15 years.

After decades of tight government control of the telecom sector, the massive undertaking is spawning a host of side industries entirely new to Myanmar, including a massive tower-building effort that has drawn significant interest from foreign investors. Telenor's plans alone call for 8,000 wireless towers over the next five years.

Unlike its earlier move into Bangladesh in the 1990s, when it built its own towers, Telenor this time has contracted the job out. One of its main contractors, Singapore-based Apollo Towers Private, recently drew a $40 million investment from U.S.-based TPG Capital. Joining Telenor's effort is a joint venture between India-based Quippo Telecom Infrastructure and Middle East-based Golden Towers.

Ooredoo is doing the same, contracting its tower needs out to a joint venture between Caribbean-based Digicel Group and Myanmar businessman Serge Pun's YSH Finance.

The nascent tower industry is likely to boost opportunities for both local and foreign business, Telenor's Myanmar CEO Petter Furberg told Nikkei Asian Review. "Now we are running a business model which is to a much larger extent based on outsourcing, and saying we want to have specialist partners doing different parts of the value chain," he said.

Telenor is pushing to complete its first 1,000 towers by September, while Ooredoo is aiming for 400 by the year's end. Both telecom companies have embraced the tower-sharing model, in which the companies building the towers rent them out to the wireless operators. Eventually, Ooredoo and Telenor, as well as the two state-owned operators, may well be renting the same towers. "It's a huge advantage to be able to share the steel," added Furberg.

The Telenor and Ooredoo efforts are also creating jobs. Telenor expects, eventually, to directly employ 1,000 people, with its partners employing an additional 2,000. Ooredoo says it has already hired more than 800 full-time employees.

For local business, Ooredoo and Telenor are generating massive public interest as well as opportunities. 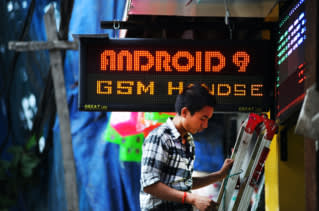 A worker installs a sign at a mobile phone shop, in anticipation of a rapidly expanding market. (Photo by Steve Tickner)

Speaking at Telenor's gleaming new headquarters on Yangon's Industrial Road in May, Furberg predicted that modern mobile services will not only make doing business easier -- they will create an entire new industry, from retail to Internet content development.

Telenor is inking deals with 100,000 "mom-and-pop" stores, he said, that will sell Telenor SIM cards and eliminate the multiple middlemen who stand between the consumer and mobile phone and Internet access.

"That ensures that most of the money stays" with local retailers, Furberg said. "We are maintaining fixed prices for the customer. The lowest level gets most of the margin. ... This then generates a recurring business."

It is a far cry from just five years ago, when SIM cards cost more than $2,000 before the former military junta, which handed power to a civilian-led government in 2011, started easing its grip on the country's communications apparatus. Up to recently, the sector was a lucrative source of income for a powerful few. Now, the government, under a special scheme, doles out $1.50 cards through a lottery, though many still end up on the black market for prices exceeding $100.

That will all change, according to Furberg. Starting soon, "you can buy as many SIM cards as you want," he added, noting that in neighboring Thailand, there are about 80 million SIM cards in a country of 67 million people, with 3-4 million sold every month.

"It never stops once you get into the mobile business, just selling SIM cards," he said. "And then, with people changing their handsets every two years," it creates new equipment sales opportunities.

Following the rollout this year, the next step for both companies will be to connect more fully to Myanmar's remote rural areas, particularly in Kachin and Shan states to the northeast of Yangon, which are still wracked by conflict between Myanmar's army and ethnic militias despite government efforts to strike a nationwide peace accord.

Ooredoo's CEO in Myanmar, Ross Cormack, told NAR that one of the company's challenges is to ensure it is welcomed in ethnic areas, beyond the centers for the country's Bamar Buddhist majority. "You've got these other states with different ethnicities and different ways of living and different behaviors, so we're just trying to learn our way through that," he said.

On the political front, Ooredoo's roots in Muslim-majority Qatar have made it the target of a boycott by hardline Buddhist monks, amid the spread of anti-Muslim sentiment in this Buddhist-majority country.

Telenor, meanwhile, has appointed state liaison officers for conflict areas to be its "ears on the ground," said Furberg. One of the goals, he said, is to develop a post-conflict business strategy for these areas, to determine "what's next -- with the peace, what we can actually do."

Far down the big business chain, as the roll-out drives new local ventures in Myanmar, it is putting an end to more traditional telecoms-related businesses including Ma Kyi's dial-up service. These days people only come when they've run out of mobile phone credit. "I'm a bit worried," she said. "I'm sure fewer people will come."

Revenue from the Telenor and Ooredoo telecom licenses -- Telenor, for example, says it paid $500 million for its license - will help the government keep its budget deficit within 5% of gross domestic product, the International Monetary Fund said on June 17 after its annual Myanmar assessment.

But in each case, local companies are reacting with a mixture of anticipation and dread, depending on their level of readiness to face foreign competition.

State-owned Myanmar Posts and Telecommunications (MPT), which has held a fixed-line monopoly until now, is watching the Ooredoo and Telenor rollouts closely. In an early sign of looming competition, MPT took the unprecedented step of offering customers a special holiday deal during the recent Buddhist New Year. Both MPT and majority state-owned Yatanarpon Teleport -- an internet service provider and mobile operator that will be the fourth competitor in the liberalized wireless market -- are trying to negotiate deals with foreign companies to help them modernize and compete more effectively. MPT is talking with Japan's KDDI, and Yatanarpon has discussed a deal with Thailand's True Corp. as well as others.

Most estimates for mobile phone penetration rank Myanmar near rock bottom at about 7.1% of the population in 2013 -- most of it concentrated in and around the major urban centers of Yangon and Mandalay. In Yangon, where affluence abounds despite the crumbling streets and sidewalks, slow connection speeds have not stopped the Internet from becoming a staple of many people's lives already, primarily through their smartphones.

Ultimately, however, the biggest challenge for the foreign telecom providers will be managing the expectations of a public starved for the mobile and Internet services that people throughout the rest of the region have come to expect.

"People have very high expectations for what they can get," said Telenor's Furberg, with a hint of trepidation.