Nestle serves up robots in Japan to woo Chinese customers TOKYO -- "How about a coffee?" greets Pepper the humanoid robot in Chinese, as tourists come to an open booth on the third floor of a commercial complex in Asakusa, Tokyo's historic downtown area.

The visitor chooses the type, size and strength of coffee using the tablet held by SoftBank Group's Pepper. Once the selection is made, the humanoid places the order to a dual-arm robot built by Kawasaki Heavy Industries nearby, which makes coffee with a Nestle coffee machine and places a cup filled with the beverage on the serving tray. The entire process takes exactly three minutes and purchases can be made through Alipay, Alibaba Group Holding's mobile payment system.

Welcome to the coffee drinking style a la Switzerland-based Nestle -- one that may not be as fancy as drinking at Starbucks, but not as routine as buying from a vending machine.

The fact the marketing campaign is taking place in Asakusa -- a popular destination for Chinese tourists, particularly during the Lunar New Year holiday season, which started in earnest Friday -- shows how eager the world's largest food and drinks company is to expand sales of its instant coffee in China. And it comes as U.S. rival Starbucks is rapidly raising its profile in the traditionally tea-drinking nation.

During the holiday season, six million Chinese are expected to travel abroad, with Japan the second-most popular destination, according to travel agencies. Nestle is hoping that as many Chinese tourists will visit the cash-free, cashier-free outlet as possible, and learn that there is an alternative to visiting Starbucks. Nestle is the world's biggest coffee company, famous for its 'Nescafe Gold Blend' instant coffee. Slowing sales in the developed markets has led the company to turn to emerging Asia for growth.

The maker of brands such as Nescafe coffee and KitKat chocolate bars says China is one of its key markets with strategic importance. "The core mission for Nescafe in China is to drive the coffee culture and consumption and become the most preferred and pioneering coffee brand for future generations in China," Nestle China spokesperson Liu Ying said.

Nestle is the world's largest coffee company, best known for its "Nescafe Gold Blend" instant coffee powder. It is also expanding the range of its offerings from packaged drinks to small capsules of fresh-ground coffee sold in pods or small containers for use in Nestle coffee machines. The idea is to create an experience close to drinking real brewed coffee at home with the ease of instant coffee -- and without queuing up in a store. Coffee machines also allow Nestle to lock customers in to its products.

"We want Chinese people to sample coffee in Japan and discover how tasty it is, even when it is served black, and to become coffee drinkers," said Motoi Shimakawa, Nestle Japan manager. Using Nestle's instant coffee and coffee-making machines, "you can enjoy tasty coffee at a lower cost" than at Starbucks, he added.

Despite Nestle's long presence in China, the coffee market there is still limited. Its per-capita coffee consumption is estimated at less than 10 cups a year. Even in urban areas, annual consumption is believed to be around 20 cups, significantly fewer than the 200 to 400 cups a year in developed countries.

But there are signs of an awakening. Starbucks already has more than 3,000 stores in China -- 600 of them in Shanghai alone, more than in New York or in London.

Sales at coffee-store chains increased 4.2-fold in China between 2011 and 2016 to $3.8 billion dollars, according to data from British research company Euromonitor, even as a cup of coffee at a cafe in China costs 24 yuan ($3.82) on average.

During the same period, retail sales of packaged coffee -- which includes instant coffee, ground coffee and coffee beans -- grew only 22% to 62,717 tons, or in dollar terms, 37% to $1 billion, Euromonitor says. 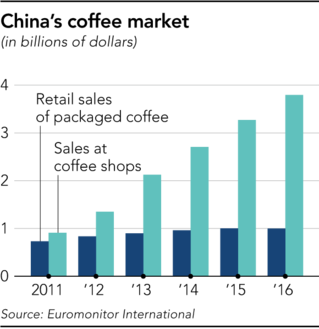 The hope is that the spread of cafes will familiarize Chinese consumers with good quality coffee and create demand for such coffee at home and in the office.

Nestle dominates China's retail coffee market with a 70% share, according to Euromonitor. The company is already offering a full portfolio of coffee products in China, ranging from drinks to powder to capsule coffee. And it markets two kinds of coffee machines in the country -- Dolce Gusto and Nespresso -- that use imported coffee capsules from Europe. Dolce Gusto makes cappuccino, latte, mocha and chocolate milk, while Nespresso is an espresso maker.

In Japan, Nestle coffee machines are placed at 1,800 restaurants and hotels, in addition to more than 3,000 supermarkets and car dealerships.

Nestle aims to have more of its machines installed in hotels and restaurants across Japan and expose more Asian tourists to coffee culture. By teaming with Pepper and other robots, coffee can also be served to guests from China without knowing a word of Chinese.

"China is following the pattern of Japan," said Nestle Japan's Shimakawa. The company started producing Nescafe instant coffee in Japan in 1960s, and now the country is the fifth-largest coffee-consuming nation after Brazil, the U.S., Indonesia and Germany. "Coffee consumption tends to increase as the economy grows and becomes wealthier," he said.