KUALA LUMPUR -- The Lunar New Year celebrated by Chinese around the world is a week away but in Malaysia, the zodiac symbol of the dog is conspicuously missing in many commercial displays.

Shopping malls in the country's capital are already lit up with plum blossoms to usher in spring and other ornaments in the auspicious red color are prominently displayed. Yet, there was nothing to suggest that it was the Year of Dog, one of the 12 animals in the Chinese astrological calendar.

A festive T-shirt sold by supermarket chain Giant, a unit of Hong Kong-based Dairy Farm International Holdings, is emblazoned with images of the animals except for dog and pig. The two animals were substituted by their Chinese characters.

Dog and pig are considered unclean by the country's Muslim majority and ethnic Chinese-owned retailers are self-censoring to avoid unnecessary backlash.

"We are very practical business people," said Eddy Chen, president of Malaysia Shopping Malls Association, in an interview. He added that the displays were "market-driven" and it was not the first time that mall management avoided such pictures due to religious sensitivity. Chen said that his association did not give any directive on the displays and it was the malls themselves that made such decisions. 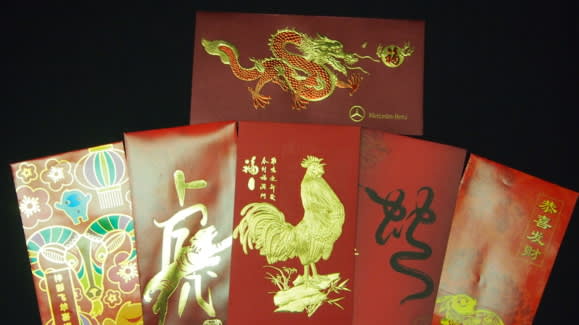 Red envelopes featuring zodiac animals are given out by retailers to customers. It is a Chinese tradition to give the 'hongbao' inserted with money to kids during the Lunar New Year celebrations.

Malaysian religious authorities had in the past ordered a U.S. fast-food chain Auntie Anne's to rename its "Pretzel Dog" to "Pretzel Sausage" to avoid putting off Muslims.

But some shoppers think these malls have overreacted and their actions put Muslims in a negative light. "It's just a logo. I don't understand why they are so afraid," said Zarinah Zainal, a Muslim businesswoman. The Malaysian Islamic Development Department issued a statement Monday, asking the public to respect the use of those animals as part of the Chinese celebration. It said "moderation" is part of the government's policy to maintain unity in the multi-ethnic country.

But businesses are unlikely to take any chances. Chen expects "restrained" displays in the Year of Pig next year. "There are many ways to decorate a mall, not necessarily using the animals," he said.