TOKYO -- Samsung Electronics is casting about for new customers for its organic light-emitting diode panels, now that its top client Apple has slashed production of the iPhone X due to weak demand.

Having ramped up production capacity to meet demand for the latest iPhone, the first model to incorporate the panels, Samsung is now saddled with excess production capacity. Other smartphone makers, who Samsung had hoped would incorporate OLED panels, have been slow to make the transition due to their expense and are sticking to liquid crystal displays.

"Samsung is increasingly selling OLED panels to outside clients," said an official at an electronics trading company in Tokyo. Production of the iPhone X, whose sales have been sluggish, is expected to drop by half in the first three months of this year from the initial estimate of over 40 million units.

Samsung's OLED smartphone panels are priced at over $100 per unit, including touch sensors. They can display colors in high resolution and can be bent to narrow the phone's bezel.

But the price is nearly twice that of LCDs used in the iPhone 8 Plus, also supplied by Samsung. The high cost of parts is one reason the latest iPhone X is priced at a relatively high $999 or more.

For Samsung, the dominant OLED market player, it is also difficult to expand sales of its smartphones equipped with expensive panels. According to IHS Markit, a British research company, the number of OLED smartphone panels Samsung internally sources for its own smartphones fell year on year in 2017. "Using OLED panels makes it difficult to compete with rivals on price," said Hiroshi Hayase, senior director at IHS Markit. 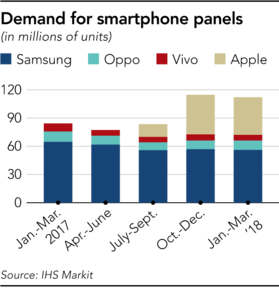 Manufacturers of midrange smartphones that cannot absorb rising costs by passing them on to consumers are avoiding adopting OLED panels. Only 5-10% of smartphones made by Oppo and Vivo, China's major smartphone makers, use OLED panels. The problem is the high cost. Such panels cost 40% more than LCD panels made of low-temperature polysilicon, which can show colors clearly.

Display Supply Chain Consultants of the U.S. estimates the utilization rate at Samsung's OLED panel factories is around 50-60% due to sluggish demand from smartphone makers. Given the overcapacity, "the price of rigid-type panels on glass substrates has been falling," said Yoshio Tamura, head of DSCC's Asian operations.

Supply capacity is expected to grow worldwide. LG Display of South Korea is set to launch a new production line as early as this year, and China's BOE Technology Group and Tianma Microelectronics have launched new factories with the assistance of government subsidies. Overall production capacity is expected to double by 2020 compared to the 2017 level. Samsung's near dominance in the market for OLED smartphone panels -- over 95% -- will likely be lost.

To cope with oversupply, companies need to develop products that take advantage of the flexibility of OLED panels. The bar in global competition will likely rise further for Sharp and Japan Display, which are preparing to start mass-producing OLED panels in 2018 or 2019.