NEW DELHI -- Traders jostle for room along bustling Hardhyan Singh Road in Karol Bagh, a major wholesale market in India's capital, as shops prop spools of colorful fabric against each other seeking to draw in manufacturers of bags, shoes and upholstery.

The fabric is made from polyvinyl chloride, better known as PVC, a plausible imitation of leather. PVC is one of the reasons for the decline in demand for leather from India, which supplies 10% of global demand and is the world's second-largest producer of footwear and leather garments.

Indian exports of leather and leather products for the period of April to December 2015 fell to $4.46 billion, down 10.68% from the same period in 2014, according to the Council for Leather Exports, a trade promotion organization sponsored by the Ministry of Commerce and Industry.

The decline was smaller in local currency terms, at 4.78%, but monthly figures for December, the latest available, show a fall of 13.5% in dollar terms and 7.83% in rupee terms compared with a year earlier, suggesting that the drop is accelerating. 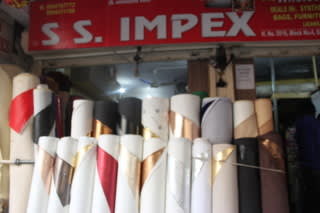 Bolts of synthetic leather are lined up at a seller's shop in India.

PVC substitution is a key reason for the decline, in part because of the widespread availability of cheap imitation leather fabrics from China -- generically known as rexine, a synthetic leather fabric originally produced in the U.K.

Nikhil Bansal, co-founder of FC Enterprise on Hardhyan Singh Road, who imports fabric from China, said he stocks more than 500 varieties of faux leather. "We manage to sell 25,000 meters of material to manufacturers every month," said Bansal.

Abhishek Goel, who owns Annapoorna Industrial Corporation, a manufacturer of synthetic leather, said price was the main driver for PVC demand: "A leather sofa may cost one anything [around] 500,000 rupees ($7,512). With synthetic fabric, one can get the same sofa for 50,000 rupees, and change the upholstery whenever one is bored."

Exporters said the current economic slowdown in Europe had also weighed on demand. Veqarul Amin, joint managing director of Super Tannery, which owns six manufacturing units and recorded sales of $55 million in 2014, said revenue had declined by 25% in 2015.

"The Russian conflict with Ukraine and Syria has reduced the demand for Indian leather goods in these regions," he said. Recession-hit Russia, a vital market for safety leather -- shoes, gloves and other goods used by industrial workers -- has cut imports as the ruble continues to weaken against the dollar.

Amin, who is also the managing director of Super Shoes, based in Kanpur, a major leather production city, said shoe sales had fallen in Europe. "The per capita consumption of shoes has gone down from three pairs to two over the last two years," he said.

Some businesses said they were exploring new export markets in the face of declining demand from Europe. N. Mohan, global business head of footwear and leather garments at Tata International, which produces and exports close to 6.5 million pairs of shoes annually, said there were significant opportunities elsewhere.

"We will be broadening our focus to include the U.S. and other identified markets in the southern hemisphere, like South Africa and Australia," he said. "We hope to export 9-10 million pairs over the next three years."

The repercussions from restrictions imposed by the European Union on leather products in 2014 are still reverberating throughout the Indian industry. The regulations state that leather products that come in contact with the human body must not contain 3mg per kilogram or more of hexavalent chromium, a known human carcinogen.

"When exposed to sunlight, trivalent chromium used as a tanning agent may oxidize to Cr VI, which may cause allergic reactions in humans," said Amin. However, he said "most" leather goods were now "REACH-compliant," referring to an EU regulation dealing with the registration, evaluation, authorization and restriction of chemicals.

Manufacturers of leather products are also suffering supply problems following recent religion-inspired bans on the slaughter of cattle in Maharashtra and Haryana states and tougher enforcement of an earlier ban in Jharkhand. Cattle are regarded as sacred animals by India's Hindu majority, and slaughter has been banned for years in most states.

"The ban has cut our supplies by 3-5%," said Rafeeque Ahmed, who runs the All India Skin and Hide Tanners and Merchants Association in Chennai, the capital of Tamil Nadu state, which has 764 operational tanneries and manufactures about 6% of the world's supply of finished leather. As supply has tightened, prices for leather have increased, making it an even less popular choice in sluggish international markets.

India is also facing intensifying export competition from Vietnam, one of 12 countries to have signed the Trans-Pacific Partnership trade agreement last year. Hanoi already has trade agreements with the U.S. and the European Union, but the TPP will open more opportunities for the third-largest exporter of footwear after China and Italy, which accounts for about 10% of global shoe exports. Japan, Australia, Canada, Mexico and other major markets are signatories to the TPP.

Indian experts said the agreement, which requires ratification from member countries, may help Vietnam attract investment in its leather and footwear sectors, and enable it to upgrade machinery and equipment. "Several industries [have] relocated from Taiwan and China into Vietnam, which made it the preferred destination for trade," said Mohan. "The pact will further enhance Vietnam's position in the region, but we cannot underestimate India's potential."

The problems facing India's leather industry conflict with an ambitious "Make in India" campaign to boost manufacturing that was announced by Prime Minister Narendra Modi after his party swept to power in 2014. It emphasizes skills development and employment generation within the industry, which produces 2 billion sq. feet of leather a year, but results are yet to be seen.

Ahmed, chairman of the leather exports council, remains optimistic and said the trend is "not worrisome," despite the industry's failure to overcome other problems, such as erratic power supplies and underutilized tanneries. He said the industry would bounce back, perhaps by the middle of 2016. "New orders are coming in, but we will have to observe the trend over the next six months."