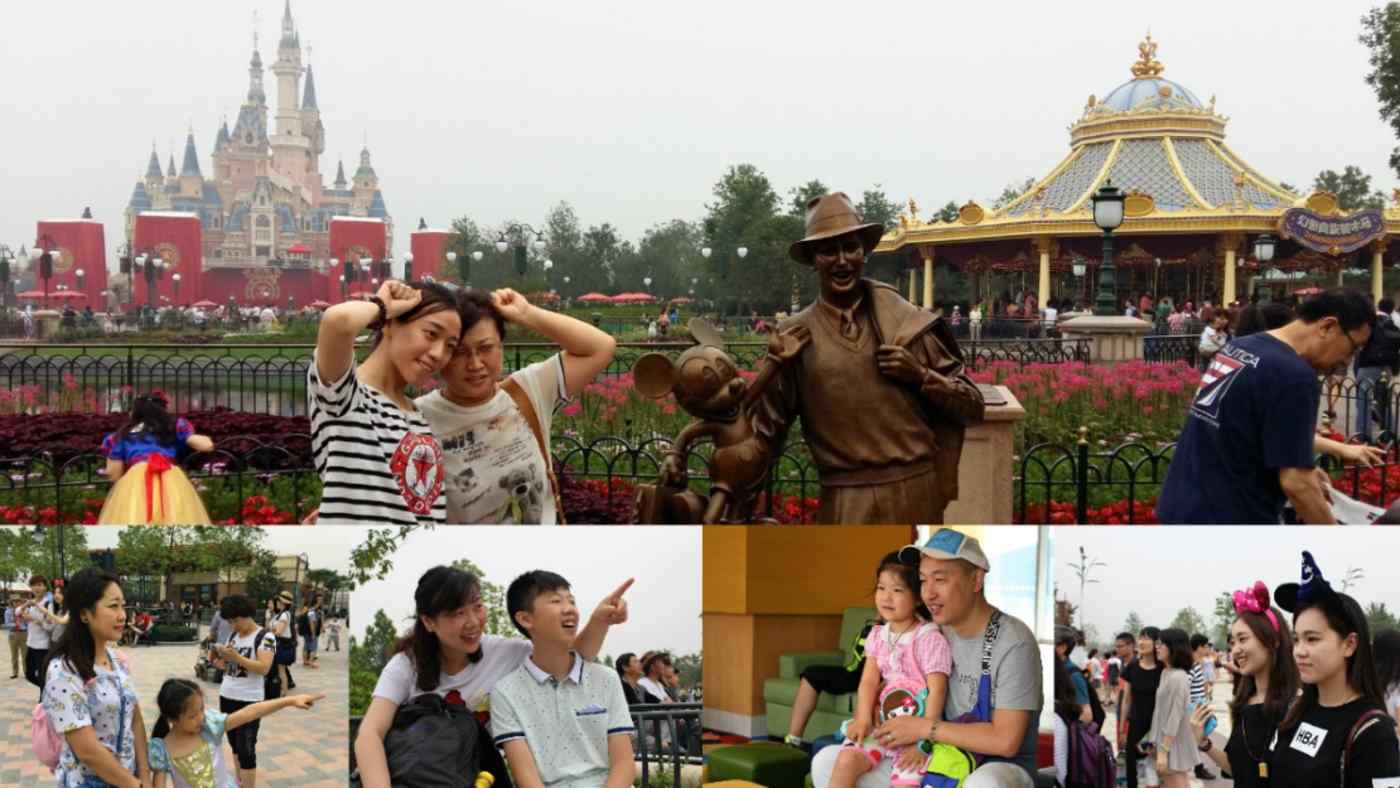 SHANGHAI/DALIAN, China -- Chinese middle-class consumers are shying away from possessions and becoming more willing to spend money on having memorable experiences, according to a survey of visitors at Shanghai Disneyland.

We went to the recently opened theme park and asked 100 Chinese visitors what they wanted to buy or do. Many of them were in their 20s or 30s and belonged to the country's upper-middle class.

A surprisingly large number of them said there were no particular items they wanted to purchase at the moment, while 70% of the respondents said they wanted to travel more.

The survey shows that young and middle-aged Chinese consumers' priorities are changing.

"I want to travel, and I don't want to be stingy with my money," said Wang Ling, a 37-year-old employee from Wuhan, Hubei Province, who was with her 12-year-old son.

She lives with her husband and son in a 130-sq.-meter house and drives a Toyota Motor's Crown. Her family's annual income is 200,000-300,000 yuan. A practical person, she is not interested in buying upscale products such as brand-name cosmetics.

When she was asked what she wanted to buy, she pondered the question for more than a minute and then said with a smile, "Nothing comes to mind."

Enrolled in a health insurance plan, she is not worried about old age. She splurges on her travels. Her budget for the trip to Disneyland is 10,000 yuan to20,000 yuan, or one month of her family's income. She said she does not want to skimp on the costs of creating memorable moments with her family.

Wang has been to Hong Kong Disneyland as well, but has no plan to make another visit there now that Shanghai has one. While she has no desire to make a trip to Tokyo Disneyland, she is interested in Japan, which she says has a unique cultural heritage, as seen, for example, in its architecture. She plans to take a cruise to Japan.

Dai Youhai, a 37-year-old supermarket owner from Huaibei, Anhui Province, was in the Toy Story Hotel with his 5-year-old daughter.

Dai said they traveled to the theme park on the day it opened because his daughter "is really in love with Disney characters."

"People say the Chinese economy is weakening, but my business is doing pretty well," said Dai, whose family earns about 300,000 yuan annually. He is busy with his work, and his wife is pregnant with a second child. He decided to travel to Shanghai to spend time with his daughter. "I want to get closer to my daughter by spending more quality time with her," he said.

Dai's family has a passion for trips to resorts. Last year, they visited Hainan, a tropical island known for its beach resorts. They are planning to go to Saipan this summer.

The family also plans to replace their Chinese-made car with a larger vehicle when their child is born.

Dai has no passion for shopping. He has little interest in traveling to Japan, which he described as a country for shoppers. "Now China has both Disneyland and cherry blossoms, so you don't have to take the trouble of going to Japan," he said.

People born in the 1970s and 1980s, like Wang and Dai, form the generation that is now in their prime spending years in China.

Many of them have families and very good incomes. They spent their early childhood when China was still poor and grew up amid the country's spectacular growth. They are keen on giving their children a good education.

Jin Hongying, a 35-year-old homemaker from Jilin Province, is most interested in making her child happy.

Her husband earns 300,000 yuan a year running a construction business. The family lives in a 150-sq.-meter condominium and owns a BMW and a Volkswagen Polo. Her 7-year-old daughter is learning English and taking piano and dance lessons.

Jin took her daughter to Shanghai Disneyland because, she said, "I want her to have various experiences before she starts elementary school this autumn."

Until recently, many of Jin's generation were ardent shoppers who snapped up all kinds of goods, from watches and bags to cars and consumer electronics. As their living standards have risen, however, they have shifted their spending habits from things to experiences.

Tian Zhijun, a 33-year-old employee at an information technology company in Shanghai, echoes the prevailing sentiment among consumers of this generation. "I've already bought most of what I want," he said. "Now, I'm putting my priority on quality of life."

He lives in an apartment with two bedrooms, a living room and a dining-kitchen area with his wife and six-year-old daughter. The family's annual income is 500,000-600,000 yuan.

"I don't save money other than for my child," said Jin, who likes to relax at resorts on holidays. The family plans to vacation in Phuket, Thailand, this summer.

After the gold rush

Young consumers born in the 1990s, known as jiu ling hou (after the 90s) in China, are bound to have increasing clout in the Chinese market in the coming years.

They have never experienced poverty and tend to have cynical views about society, partly because the country's economic growth started slowing before they could get a taste of the frenzy of the boom years. This generation's consumers are known to value individuality and spend money in their own way.

Sun Wen, a 26-year-old secretary working in Shanghai, is one such person. She and her husband together earn 250,000 yuan annually.

Although they have both a home and a car, they are not quite satisfied, she said. "We want to improve our living conditions."

But she is now crazy about Disneyland and wants to visit every Disneyland in the world.

Fang Anmin, a 36-year-old employee of an internet company in Hangzhou, Zhejiang Province, has gripes about high taxes. He lives apart from his family for the sake of his job, which brings an annual income of 500,000 yuan. But his take-home pay is not very large, he said. After paying insurance premiums and stashing away a sizable sum every month to finance his 7-year-old daughter's future education, he does not have much left to spend freely.

He is keen on trips to Japan. Since 2013, he has visited the country seven times. He has been to Tokyo Disneyland. "I'm going to Tohoku next time," he said, and his goal is to visit all 47 prefectures.

Fang prefers visiting quiet places where he does not run into many Chinese. He used to go on shopping sprees in Japan, as many Chinese tourists do, but his purpose for travel has changed over time.

He spent this year's New Year holiday in Okinawa, savoring his time at an island resort, and in Niigata Prefecture, where he enjoyed hot springs and snow.

Chinese tourists' waning appetite for shopping in Japan reflects changes in their lifestyles and values.