On Singapore's Orchard Road, the signs of change are easy to see: Venerable department stores have closed up shop and a new commercial complex is struggling to gain traction with customers despite opening with much fanfare only a year ago.

One reason often put forward for the trouble facing the district is the weak yen. Tourists who once flocked to Singapore for the shopping are now choosing to spend their money in Japan.

That is only part of the story, however. 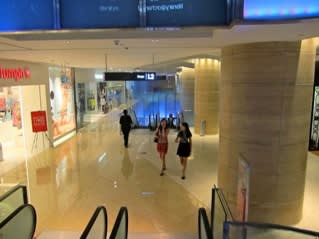 A number of malls along the Orchard Road shopping strip in Singapore are struggling to draw customer traffic.

Even though June 6 was a Saturday, one of the major shopping malls on Orchard Road was nearly deserted. It's not the only one in trouble.

Many malls in the area feature fast-fashion tenants in prominent locations, but there is little -- if any -- coherence in how the shops are placed in relation to one another.

In one shopping mall, for instance, a women's lingerie shop sits next to a golf store, clearly reflecting the lack of strategic thinking based on knowledge of customer habits and movements.

Orchardgateway is a prime example of the woes plaguing Orchard Road. It opened only a year ago, but at least five tenants have already moved out, according to local media reports. Despite its prime location between famous shopping malls, there have been days when some shops did not log any sales at all.

"Developers' thinking has put consumers off," said a businessman previously engaged in operating commercial complexes in Japan. When selecting tenants, property developers tend to focus on immediate income from rent. Too often, this approach results in a nondescript mall that fails to excite shoppers' interest. A number of such facilities have cropped up along Orchard Road, and almost all of them have been struggling to bring in customers.

This situation is reminiscent of the challenges Japanese commercial facility operators experienced in the early 1990s. Commercial buildings near train stations had enjoyed heavy customer traffic since the start of Japan's high-growth era, in the mid-1950s. But they struggled to stay competitive when large shopping malls started popping up in suburbs. These newcomers grabbed market share by playing up the convenience and fun of shopping in facilities that were more spacious and offered more to choose from.

At the same time, Japan's consumer market reached saturation, meaning retailers now have to fight harder than ever to win over fickle customers.

In the half-century since its national founding, Singapore has become a major driver of Asia's economic growth. Its people, now far better-off financially, are no longer satisfied with run-of-the-mill shops that display their wares with no creativity. Singapore's consumer market is teetering on the verge of change as customers, not the suppliers, start setting the rules.

The once-ravenous appetite for consumer goods seems to be abating elsewhere, too. Newly opened commercial facilities in Kuala Lumpur and Bangkok remain largely empty, despite being located in national capitals.

To tap potentially huge demand among 600 million people living in the Association of Southeast Asian Nations, Japanese retailers and restaurant chain operators have made inroads into the region and have started producing food and other products locally.

But while there are plenty of eager shoppers in the region, there are also signs that the sheer abundance of products is starting to cause a sense of fatigue among consumers. Business would do well to develop a "multitrack mind" approach to Southeast Asia's increasingly diverse consumer markets.