TOKYO -- The growth of budget airlines has not only led to shifts in travel patterns across Asia, but is changing the demand picture in the global aircraft market, and in turn the product strategies of aircraft manufacturers. 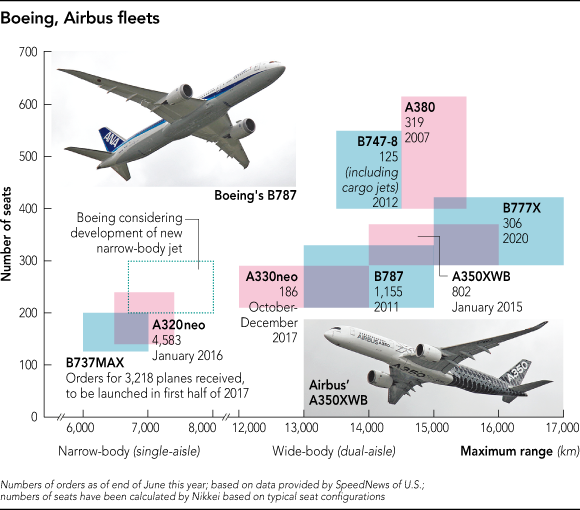 Group chief executive Tony Fernandes said, "With these aircraft, we will hit 100 million passengers in the not-too-distant future." The no-frills carrier will focus on the Chinese and Indian markets in particular, he said.

The Kuala Lumpur-based carrier operates flights connecting a number of locations in Southeast Asia and now hopes to expand further into China and India.

Fernandes cited seating capacity as the key reason for choosing the A321neo, bringing a broad smile to the face of Fabrice Bregier, Airbus president and CEO.

AirAsia, which also ordered 200 A320neo in 2011, is perhaps the customer that best attests to Airbus' competitive advantage in the market for narrow-body aircrafts.

The European manufacturer produces a range of competitive, narrow-body jet liners that can accommodate up to 240 seats in a dense, all-economy configuration. In addition to higher seating capacities, narrow-body, or single-aisle planes require fewer cabin staff and can operate at lower costs than larger, twin-aisle aircraft.

While growth in overall demand for passenger aircraft is slowing, orders for narrow-body jets are on the rise as they meet the needs of low-cost carriers. Budget airlines are now emerging as key customers for aircraft manufacturers with the growing demand for low-priced air tickets.

The fuel-efficient A320neo series has burst on to the scene in the segment, with more than 4,500 units already ordered.

The first model was delivered in January and the aircraft appears to be on track to dominate budget airline fleets worldwide.

Boeing has been a little slower to respond to the trend than its European rival.

Boeing's equivalent narrow-body airliner is the B737MAX, which will be launched during the first half of 2017. The American company has so far received orders for 3,200 models, 30% less than the rival Airbus jet.

The B737MAX, which cannot accommodate much more than 200 seats, has been struggling to compete in this important section of the market.

At Farnborough, Boeing CEO Dennis Muilenburg and other senior executives were peppered with questions about the company's plan to blunt the runaway success of its rival.

Boeing is rumored to be considering the development of a new narrow-body jet that can fit 200 - 270 seats.

In an interview with The Nikkei and other media at the show, Muilenburg said there are three options under consideration.

The first would be to stretch the 737MAX. That would cost less than developing a new model from scratch, which is a option number two.

Boeing has now ceased production of the B757, which it used to offer as a narrow-body jet with a similar seating capacity.

Developing a new aircraft would cost several billion dollars, according to one estimate, meaning a failure to win sufficient orders would be a considerable blow.

Muilenburg said Boeing is currently estimating the potential demand, but was confident in the company's ability to develop a new narrow-body jetliner.

As a third option, the Boeing chief executive pointed out the possibility of sticking to the current models for the segment -- the 737MAX and the wide-body B787.

If the company does go ahead with a new jet, it will be launched around 2024 - 25, according to the CEO, meaning there is plenty of time to weigh up options before coming to a decision.

However Boeing responds to the challenge, it will be monitored closely by the entire industry as the decision could affect thousands of parts suppliers and related industries across the globe.