Snowy Hokkaido is hot in Thailand 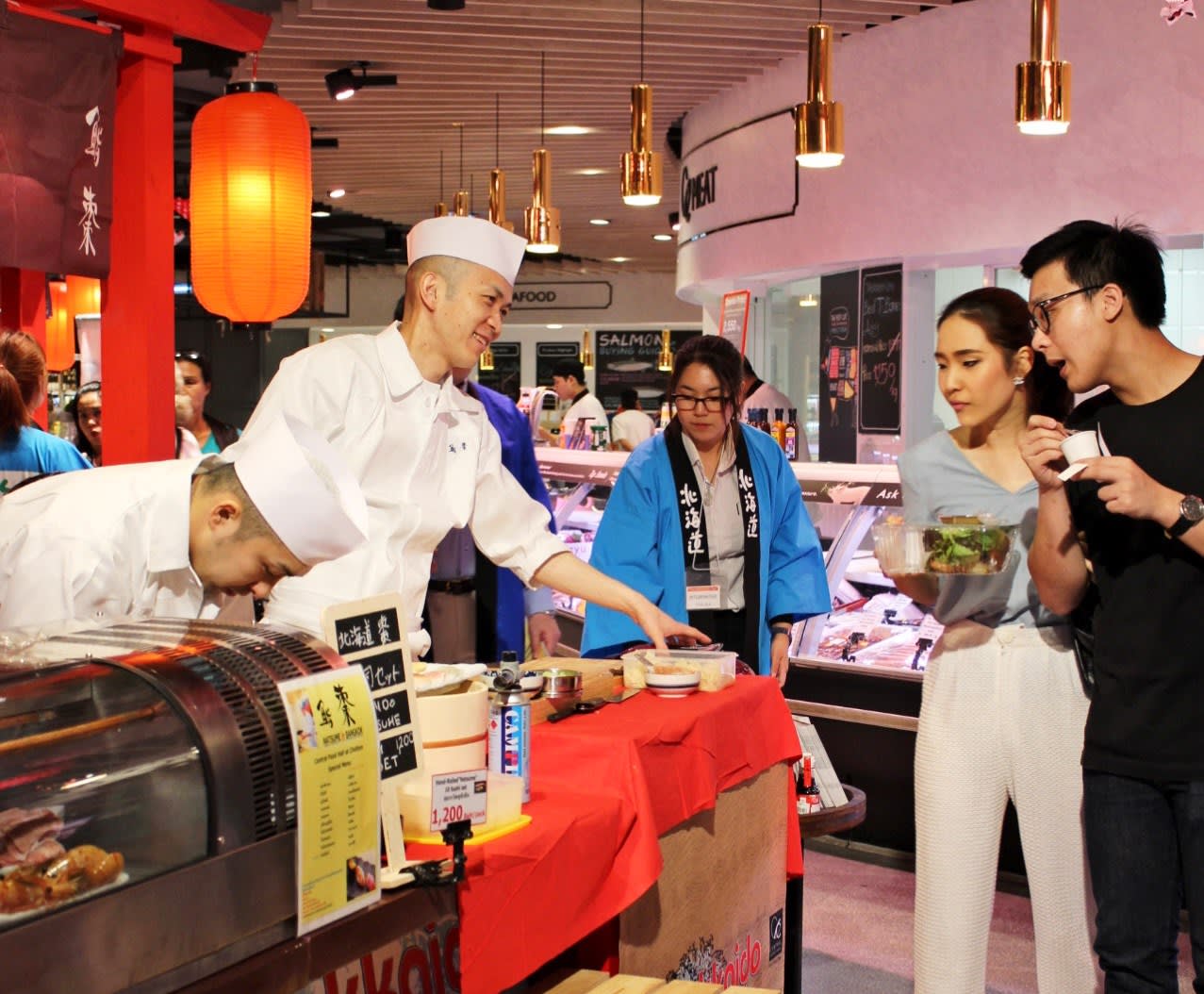 TOKYO -- Businesses on Japan's northernmost island Hokkaido are stepping up efforts to woo the growing number of Thai tourists visiting the region for its fresh produce and snowy winters.

The meeting turned out well for Umeki whose company's app Trippino Hokkaido will feature in leading Thai travel magazine ''Travel Around The World'' this month. The magazine has a monthly circulation of 70,000 copies. The app lets Thai tourists search in their own language for information on more than 500 Hokkaido destinations, as well as letting them post photos to Facebook easily. The app also entitles users to discounts at stores participating in the program. Gear8 developed the app knowing that many Thai tourists use Facebook to share experiences with friends. Akihito Mizuno, president of Gear8, said he hopes the app will help tourists have more fun during their trip.

Another Bangkok travel agency said Furano and Biei in central Hokkaido are also sought-after sightseeing spots in summer. The January issue of "Anywhere," an exclusive Thai travel magazine, featured tourist spots such as flower parks in Biei and nature in Obihiro.

The leap in tourists from Thailand is largely attributable to the launch of a tri-weekly direct Thai Airways flight between Sapporo and Bangkok at the end of October, 2012. A year later, the service increased to once a day.

Easing of visa requirements for travelers from five Southeast Asian countries including Thailand in July 2013 and the weaker yen have also boosted the travel boom.

A recovering economy is another factor encouraging Thais to visit Japan. Thailand's gross domestic product in 2012 grew by 6.5% from a year ago. Although growth temporarily slowed due to large-scale anti-government protests, exports have recently picked up, pushing up infrastructure investment as well. The National Economic and Social Development Board, an institution that provides the government with opinions and recommendations on national economic issues, estimates growth will reach 3.5-4.5% this year.

Hokkaido, with its graying population and rapidly declining growth, would get a significant boost in consumption if it could attract more visitors from Thailand.

Hokkaido International Trade & Industry Promotion Association and the Sapporo Chamber of Commerce and Industry are also stepping up efforts to market Hokkaido in Thailand. They hosted an exhibition of Hokkaido-made products at a department store in Bangkok. They also sold home-grown seafood in collaboration with Japan External Trade Organization's Hokkaido Trade Information Center at the exhibition.

Lenders are also ready to help. North Pacific Bank, based in Sapporo, opened a representative office in Bangkok a year ago. The office, which the bank hopes to use as a center to promote Hokkaido's business and products, is designed not only to promote the expansion of Hokkaido-based companies into Thailand but also to be used as a base for Hokkaido companies to attract more tourists. Hajime Hirayama, manager of the office, said that the association with tourist spots could help businesses export more made-in-Hokkaido goods to Thailand.

President of Anngle, a Sapporo-based company that posts information about Japan and Thailand online, said that as tourist traffic between the two nations grow, visitors are increasingly seeking out information on the latest events and interesting spots not mentioned in guidebooks.

However, marketing Thailand's attractions to Hokkaido travelers may need some work. The Sapporo-Bangkok flight so far has seen relatively fewer Japanese passengers than on other flights connecting Bangkok with other Japanese cities such as Tokyo and Osaka. A corporate communication official at Thai Airways said they plan to focus on developing products in collaboration with travel agencies to encourage people from Hokkaido to travel to Thailand.