TOKYO -- Sri Lanka's strategic location has allowed it to grow into a key international distribution base. Its free trade agreement with populous neighbor India has made the once war-torn island nation attractive to logistics companies and manufacturers. 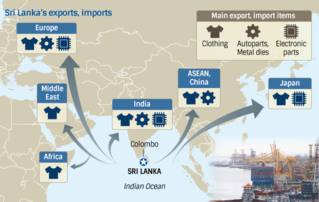 Expolanka Holdings has an international distribution center next to Bandaranaike International Airport in Colombo. Textiles from Vietnam and Bangladesh are brought to the center, sorted out by destination and then loaded on to cargo planes and ships. The Middle East, Europe and the U.S. are the main destinations for the cargo.

The major Sri Lankan logistics company provides distribution services in 18 countries across South Asia, the Middle East and Africa and has roughly 60 facilities. Japan's SG Holdings bought Expolanka in June last year for about 8 billion yen (around $64 million). Through the acquisition, the parent company of Sagawa Express, a key player in the Japanese parcel delivery market, has gained footholds in markets where strong growth is expected.

"We can offer a wide range of services by combining [Expolanka's business network] with our distribution bases in Japan and East Asia, where our strength lies," said Akira Oyama, director at SG Holdings Global, a Singaporean unit of SG Holdings.

The acquisition has already started paying dividends. In March, SG Holdings Global received an order from a major U.S. sporting goods maker to handle shipments of products made at the company's factories in Southeast and South Asia to Europe and the U.S. Two months later, it won a contract to handle logistics for a manufacturer affiliated with an Indian conglomerate.

"We are now able to handle projects that would have been too hard for us to handle by ourselves," Oyama noted. 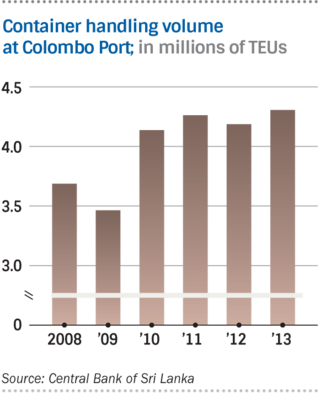 SG Holdings is not the only global logistics company that noticed the value of operating in Sri Lanka. Germany's Deutsche Post DHL has tied up with John Keells Holdings, the South Asian country's No. 1 conglomerate. APL Logistics, a Singaporean subsidiary of Japan's Kintetsu World Express, is working toward opening a facility with warehouses and container cargo handling equipment on a roughly 1 hectare plot near Colombo.

Sri Lanka's location, at the heart of the Indian Ocean, makes the country an ideal distribution base. About two-thirds of the world's tankers and around half the containerships are said to sail through waters off the island nation.

Low shipping costs also make Sri Lanka an attractive place to operate. According to the Japan External Trade Organization, container shipping costs from Colombo to Japan come to $480 per 40-foot container, far lower than the $890 from Mumbai to Japan or $1,210 from Bangkok to Japan.

Smooth customs clearance is Sri Lanka's another selling point. It only takes several days to clear customs in Sri Lanka for importing or exporting. In neighboring India, tangled customs clearance procedures make the process much more drawn out. 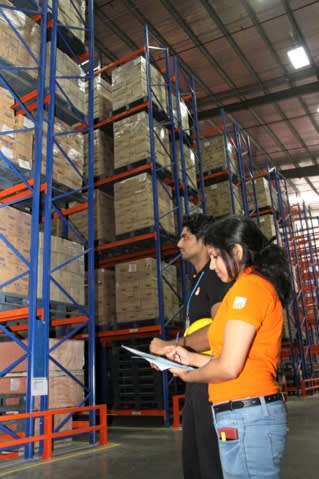 "We hardly ever hear about troubles in customs clearance" in Sri Lanka, said an SG Holdings official stationed in the country.

At Colombo Harbor, port facilities are being upgraded. A large container terminal, completed by China Merchants Holdings (International) in 2013, pushed up the container handling volume at the port of Colombo to 4.31 million 20-foot equivalent units, or TEUs, in that year. That figure was enough to push the port to No. 1 spot in South Asia, surpassing India's biggest Jawaharlal Nehru Port Trust. Once construction finishes at the new terminal, the port of Colombo's cargo handling volume is expected to increase 2.5 times to 12 million TEUs.

Sri Lanka's free trade agreement with India makes it even more attractive as a distribution base. Because the agreement allows a wide range of items to be traded duty free between the two countries, an increasing number of manufacturers are turning to Sri Lanka as a production base for products intended for the Indian market.

Lanka Precision Engineering, a local unit of a Japanese manufacturer of precision stamping dies, for example, is making metal dies for surgical knives to deliver them to an Indian medical equipment maker by the end of the month.

The aggregate population in the 20 countries that make up the Indian Ocean Rim Association is projected to account for a third of people globally by 2040. Furthermore, their combined gross domestic product is forecast to make up 12% of the world's that year. This makes Sri Lanka even more valuable as a major global distribution hub.