TOKYO/MATSUYAMA, Japan -- In the old Japanese capital of Kyoto, on the Ninenzaka slope leading up to the Kiyomizu Temple, one of the city's most notable landmarks, a 100-year-old traditional house has been turned into a Starbucks coffee shop.

At Starbucks Kyoto Ninenzaka Yasaka Chaya, which opened in June last year, the exterior of the building has been left untouched to preserve its historic character. There is no green, twin-tailed mermaid Starbucks logo. Customers are ushered in through an indigo curtain. While the original floor has been covered with finished concrete, the walls, pillars and room layouts have been kept in the original.

Here, as at many other locations around the country, Starbucks Coffee Japan has developed unique store designs that incorporate elements of traditional culture and history. This approach has done much to make the brand stand out, turning Starbucks into a "third place" for many customers between their homes and workplaces.

"I visited Kyoto over and over again, and it took us a year simply to work out a concrete plan," said Mayu Takashima, head of Starbucks Japan's design team, who interviewed local residents and handicraft organizations.

The order counter at the Ninenzaka shop is set in earthy space. Orders are picked up at a counter in the innermost room, where customers pass through a garden area characteristic of Kyoto's machiya -- traditional houses where merchants and crafts people once lived. 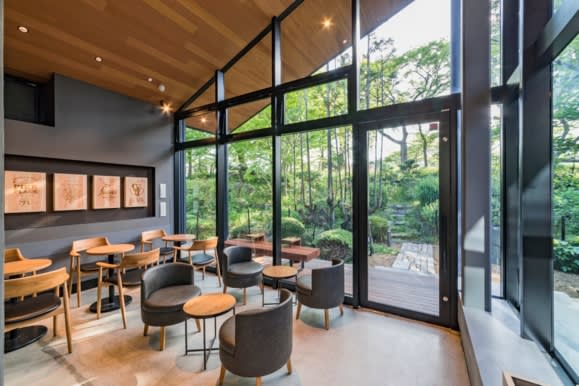 At Starbucks Kyoto Uji Byodoin Omotesando, a private home was demolished but the landscape and stone path were improved.

On the second floor, there is a tatami room where a hanging scroll depicts the Otowa Waterfall at the Kiyomizu Temple. The alcove is decorated with a scroll showing a water stream that appears to be part of the coffee brewing process. Near the stairs, there is a chandelier made of rain chains -- strings of small metal cups with holes in them, chained together to channel the rain.

Given the soothing garden views, customers could be forgiven for feeling they have been personally invited in by the household lord.

"It would have been easier if we could run a coffee chain with the same store design, but our stores will not be accepted by the community without unique designs and an understanding of history and culture," Takashima said.

The U.S. coffee chain operates about 1,300 stores in Japan and opens nearly 100 new ones each year. Nearly all are conceived by around 30 in-house designers. Since Howard Schultz returned as Starbucks CEO in 2008, he has emphasized the "local relevance" of Starbucks outlets.

"In recent years, we have been trying to make each store unique," said Takafumi Minaguchi, CEO of Starbucks Coffee Japan. 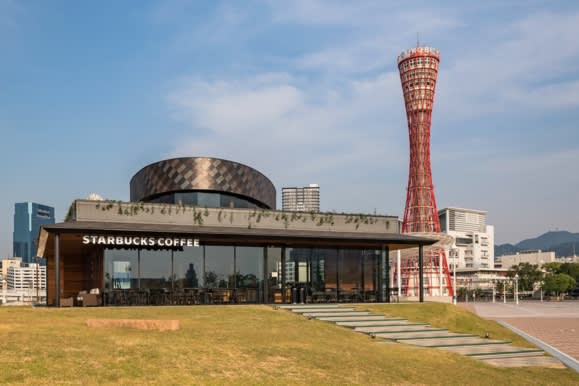 Starbucks Kobe Meriken Park store is modeled on the bow of a ship, and has become a landmark in the area.

Community-based Starbucks often use local furniture. The Dogo Onsen Ekisha store, which opened in December in Matsuyama, Ehime Prefecture on the western main island of Shikoku, is a renovated, western-style two-story railway station built during the Meiji era (1868-1912) and restored in 1986.

On the first floor, from a window at the back of the bar counter made of railway sleepers, one can look out at street cars departing from and arriving at the station. Pictures of old Iyo Railway steam trains and other modes of transportation are displayed on the wall. A 10-seat table in the middle of the second floor is made of railway sleepers and rails.

"I hope our customers find these furnishings interesting, and it may start a conversation between customers and staff," Takashima said.

Starbucks Kyoto Uji Byodoin Omotesando in Uji, Kyoto Prefecture, opened last March on the approach to the Byodoin Temple. So as not to disturb the temple's atmosphere, the store only accounts for about half of the site and is located a few meters back from the temple approach.

"We tried not to make it too visible," Takashima said.

Starbucks demolished the private home that had previously stood on the site, but left the garden untouched and improved the landscape and a stone path. High ceilings create a sense of space where customers can enjoy coffee while appreciating the changing seasons of the garden. Handicrafts using local lacquer and Paulownia wooden boxes are on display, all under the spell of the garden and the temple itself.

"We ensure that our customers will enjoy the Japanese culture as well as atmosphere," Takashima said.

In the western port city of Kobe, Starbucks Kobe Meriken Park store, which opened in April, is modeled on the bow of a ship and has become a landmark in the area, which includes the Kobe Port Tower.

What was formerly a dark, deserted place at night with no grassy space, has become a central area of Kobe Port, where families and couples gather day and night. The light from the store window bathes the park in a warm atmosphere in the evening.

"As Starbucks, we have to live up to expectations," Takashima said.