Masafumi Morita of Yo-Ho Brewing, left, examines a glass of beer from a trial batch made at Taiwan's Taihu Brewing.
Business

TOKYO -- Fresh off the success of a limited-time partnership with 7-Eleven in Taiwan, Japan's Yo-Ho Brewing plans to make its Yona Yona Ale and other signature beers available in all of the chain's convenience stores on the island. Permanently.

It is also collaborating with a local craft brewer to create a beer just for Taiwan.

Yo-Ho, Japan's largest craft brewer, enjoyed strong sales in Taiwan during last year's trial run. The success prompted the chain to ask Yo-Ho to supply beer to all 5,000 or so of the republic's 7-Elevens year-round. The brewer has decided to acquiesce to this request, perhaps by the end of this year.

Other products in the range include Aooni India pale ale and Suiyoubi no Neko Belgian White.

Indian pale ales are brewed with a lot of hops, and burst with flavor and aroma. 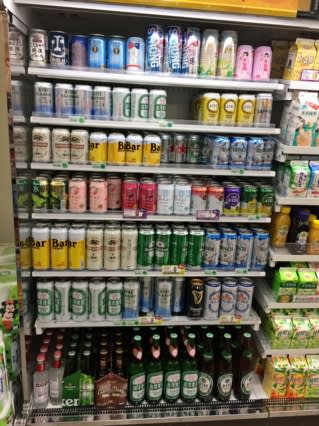 Masafumi Morita, in charge of brewing at Yo-Ho, explained the brewer's popularity in Taiwan. "In addition to a feeling of trust in made-in-Japan products," he said, "many [Taiwanese] buy our beers for the distinctive packaging."

The company is also developing a special beer with Taihu Brewing, a Taiwanese craft brewer.

One recipe under consideration calls for Japanese hops and yuzu, a Japanese citrus fruit, as well as a native Taiwanese citrus called liu ding.

"Japan-grown hops are rare in foreign countries," Morita said. "So it will be a good chance for us to promote Japanese craft beer."

In Taiwan, craft beer accounts for less than 1% of all beer sales. But the popularity of these flavorful alternatives to corporate brews is spreading, mainly among young people, allowing more small brewers to take a crack at the market.

It is a market in which one brand, Taiwan Beer, accounts for some 80% of all sales. "The current situation is similar to that in Japan a few years ago," Morita said. "That's when a huge number of Japanese began seeing craft beer as a fresh concept."

Other small Japanese beer makers -- such as Kiuchi Brewery in Ibaraki Prefecture, north of Tokyo, known for its Hitachino Nest Beer, and Niigata-based Echigo Beer -- have started exporting their beverages to Taiwan.

These brewers appear to be slaking a thirst for little-known Japanese beers.