BANGKOK -- With a population of 600 million, and good mobile saturation, Southeast Asia is becoming a battleground for e-wallet companies from China.

Leading the charge is Shenzhen-based Tencent Holdings, which is about to roll out its first WeChat Pay in a foreign currency in Malaysia as an e-wallet service embedded in its WeChat messaging app.

Tencent has been cleared for a Malaysian electronic payment license that enables locals to debit domestic bank accounts using the app to make payments in ringgit. The service is due to be launched in the coming months. Tencent has not provided more details about the upcoming Malaysian projects but is believed to be working with a wide range of local lenders to support ringgit.

Currently, Hong Kong is the only location outside mainland China where WeChat Pay and Alibaba Group Holding's Alipay process transactions in a local currency. The two apps are only available to those with debit or credit cards from China, and cater to Chinese traveling overseas or Chinese living abroad.

While Malaysia's central bank did not reply to the Nikkei Asian Review's query about the Tencent application, the company is believed to have set up a small team in an office in Kuala Lumpur.

A factor influencing the choice of Malaysia is the size of the ethnic Chinese population -- about a fifth of the 31 million there. The country already has 20 million WeChat users, and is "quite warm towards internet products from China," a Tencent official told Reuters in November. WeChat has 600 million users worldwide. Most are in China, and the majority of the 100 million overseas are in Southeast Asia. A 7-Eleven outlet in Bangkok displays a sign that it accepts Alipay. (Photo by Jason Tan)

Ant Financial, an affiliate of Jack Ma's Alibaba, runs Alipay, and has followed a different path. It has announced no plans for local currency Alipay services in the region, but is working with merchants supplying services to travelers from China, and forming joint ventures with local partners for e-wallets using their brands. In Thailand, Ant Financial has teamed up with Kasikornbank on quick response barcodes that enable Thai merchants to accept payments from Chinese tourists using the system. Ant Financial invested in 2016 in Ascend Money, a fintech unit of Thai conglomerate Charoen Pokphand, which operates the 7-Eleven convenience store chain. Ascend Money had over 3 million TrueMoney Wallet users in Thailand as of August and aims to more than double that to 8 million in 2018.

Another Ant Financial investment is in Mynt, a Philippine fintech company that owns GCash, the largest electronic wallet in the country.

In Singapore, Alipay has worked with a local startup, CC Financial Services, on the CCPay cashless payment platform. The company is working in Cambodia with Pi Pay, part of the Anco Group. Chinese tourists can use Alipay at PiPay's 1,400 point-of-sale terminals in shops, spas, petrol stations, and restaurants. 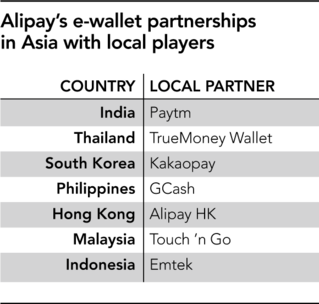 Analysts believe e-wallets are gaining traction in Southeast Asia generally, but the uptake is slower than in China, South Korea, Singapore, and India.

"WeChat Pay's arrival in Malaysia may change that," said Baseer Ahmad Siddiqui, senior research manager at IDC Malaysia. "A conducive environment and lack of competition will help WeChat Pay taste a quick success in Malaysia. If it partners with ride-hailing apps such as Grab and Uber for payments, then it will taste it even sooner."

Southeast Asia is well primed for mobile payment systems, with 50% of the populations in the six largest countries using smartphones, according to Euromonitor, a British research company. That figure is expected to top 70% in 2021, taking it close to the 80% saturation already seen in Japan and the U.S.

Meanwhile, local players have been rolling out their mobile fintech apps in their countries. In Thailand, SCB Easy of Siam Commercial Bank and Kasikornbank's K Plus are two active mobile payment providers. Non-banks include Line Pay, Garena's AirPay and AIS's mPay. Ride-hailing company Go-Jek in Indonesia has Go-Pay, a virtual wallet in Indonesia that can also be used for food deliveries and personal shopping. The Monetary Authority of Singapore recently made public that it would facilitate a partnership for cross-border transactions between Singapore's PayNow and PromptPay, a Thai platform.

Tencent and Alibaba are not alone in eyeing the regional growth potential.