BANGKOK -- The Thai auto market is expected to regain steam this year as beneficiaries of a 2012 tax break who were stuck with the same car for five years can finally sell their vehicles and purchase new ones.

Major Japanese automakers have announced new offerings in January, reflecting their eagerness to cash in on the long-awaited uptick.

On Tuesday, Kyoichi Tanada, a Toyota Motor managing officer who heads the company's Thai operations, said 2016 was the toughest year for the industry, but that the company expects 4% growth in Thai new car market to 800,000 units in 2017. The top Japanese automaker has a Thai market share of more than 30%. Its outlook is considered a key indicator of the sales climate.

Automakers are jostling to ride the rebound. Honda Motor, for instance, has announced a revamped City mainstay compact sedan, which 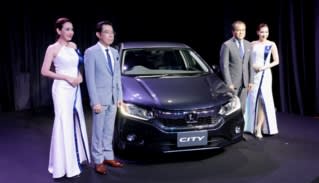 Honda on Jan. 12 unveils the latest version of its City, which accounts for a quarter of its Southeast Asian sales.

accounts for a quarter of Honda's Southeast Asian sales. The company said it plans to increase sales of all its models in Thailand by 12% this year.

Mazda Motor has an even more aggressive target. It aims for growth of 18%, and to achieve its largest market share since 2000. The plan is to roll out six new vehicles including a revamped midsize Mazda3.

The first-time car-buyer program implemented by the previous government in September 2011 had a profound and lasting impact on the market. The program's tax break led to a surge in demand, buoying Thailand's new-auto sales to a record 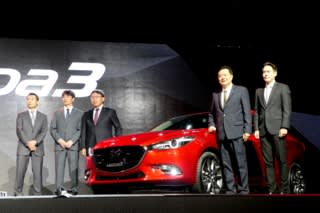 Mazda aims to snag its largest share of the Thai market since 2000.

Those who took advantage of the tax break had to hold on to their cars for five years. Many will be freed from the restriction in 2017 and can go car-shopping.

"Some 20,000-30,000 buyers in the government's first-time car buyer program are expected to buy new cars, so the club is optimistic about market sentiment," said Surapong Paisitpatanapong, spokesman for the Federation of Thai Industries automotive club, according to the English-language Bangkok Post. Improvements in farm product prices are also boosting new-car sales.

Even with the rebound, sales this year look to reach less than 60% of the 2012 volume. But the after-effects of the tax break program explain the latest excitement in the industry.

The program caused many consumers to move up their purchases -- with the result that sales languished from 2014 on. Automakers with Thai plants sought to maintain their operations by stepping up exports but some facilities had to slow down. Toyota last year solicited 800 voluntary retirees. Honda decided to lower its Thai output capacity to two-thirds by halting some of its facilities.

The deceleration by automotive businesses, a pillar of Thai manufacturing, has put the brakes on the country's economy as a whole. In most quarters since the start of 2014, the year-on-year growth rate of capital goods production -- which reflects auto output -- fell short of growth in Thailand's gross domestic product.

How will the market fare over the medium to long term?

Hiroshi Inoue, a Mazda executive in charge of emerging markets, foresees a mild recovery and says that sales might be able to recover to 1 million units by 2020.

Toyota's Tanada sees 900,000 units as a baseline level, with the volume rising to 1 million during a robust economy, and falling to 800,000 when the economy is weak.

Either way, the outlook is far from a so-called V-shaped rebound. Market players will have to fight a tough battle for a bigger slice of the pie with limited growth.

In 2016, aggregate new-auto sales in the six key Southeast Asian countries rose for the first time in three years, up 3% to about 3.2 million units. Even as Thailand's growth slowed, a rally in Indonesia -- the region's largest market -- likely buoyed overall sales.

The Southeast Asian market is comparable to India or the U.K. in size. Japanese manufacturers have a strong presence, with their combined market share totaling around 80%. So the ebb and flow of the market directly affects earnings.

Indonesia's new auto sales in 2016 likely rose 5% to around 1.06 million, although the auto industry group has yet to announce the official figure. Consumer sentiment improved thanks to lower interest rates, among other reasons.

The Philippines' sales reached the 400,000 level and Vietnam's 300,000 -- with both markets enjoying continuous double-digit growth.

In 2017, the Malaysian market is also expected to recover, helping the regional market stay on a growth track.

Toyota's Tanada has noted that growth in the region will be mild at less than 10%, given the heavy influence by the large Thai and Indonesian markets. Indonesia's market is seen reaching 1.1 million units.

As interest rates in the U.S. move higher, Southeast Asian countries can lower their rates only so much. And China, the biggest trading partner for Southeast Asia, is shrouded by economic uncertainties. An excessive focus on volume and market share could hurt earnings as well. So automakers must base their strategies on careful assessments of the market.