New tax hits exports worth some $9m for producers like Pepsi and Coke, says USDA BANGKOK -- Faced with rising obesity rates, as well as health care costs that are ballooning nearly as fast as people's waistlines, the Thai government has introduced an excise tax aimed at nudging beverage makers into making less sugary drinks.

Pricier soda and sweet tea is causing grumbles, and it is not just soda fans who are complaining. According to a report by the U.S. Department of Agriculture, the excise tax affects around $9 million worth of U.S. exports, raising their tax burden by 20-30% for some beverages. The report cites industry forecasts from U.S. companies such as Coca-Cola and PepsiCo.

With the change, taxes on fruit and vegetable juice rose to between 0.06 baht and 0.54 baht (0.2 cent to 2 cents) per bottle, and on energy drinks with high sugar content to between 0.32 baht and 0.9 baht. The sugar tax hit tea and coffee drinks hardest, as these were previously exempt. Taxes on these drinks increased by about 1 baht to 2 baht per bottle.

Obesity is a common concern among Southeast Asian nations. Singapore has requested beverage makers, including Coca-Cola, to commit to a maximum sugar content of 12% for all of their drinks sold in Singapore by 2020. Indonesia plans to introduce legislation next year aimed at reducing the content of sugar, salt and fat in food. Malaysia abolished a consumer-friendly subsidy for sugar in 2013.

The Thai Finance Ministry estimates the sugar tax will boost revenue by 2.5 billion baht annually. The country's excise tax is 30% at the maximum. The government is trying to encourage beverage makers to adjust their product lines by holding down the tax rate on beverages with low sugar content for two years after the sugar tax is introduced. 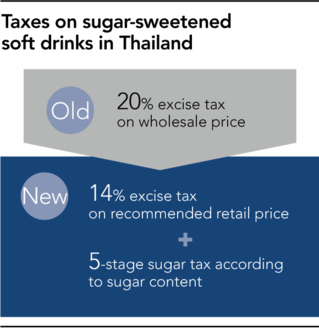 The new sugar levy briefly pushed down the stock prices of major Thai beverage makers. Immediately after the plan was announced in June, shares in makers of sweet teas, such as Oishi Group and Ichitan Group, as well as energy drink producer Carabao Group, fell.

Obesity is rising as more people get white-collar jobs and exercise less. According to a survey by the World Trade Organization, 26% of men and 33% of women in Thailand were obese in 2014, up 7-8 percentage points from 2004.