TOKYO -- Excited by the growing number of foreign visitors and the approach of the Summer Olympics in 2020, hotel operators are rushing to add new locations in Tokyo.

Daiwa Royal plans to open a business hotel in Tokyo's Ariake district in the spring of 2017. The new addition to the company's Daiwa Roynet Hotels chain will have 364 guest rooms. Room charges are expected to come to around 10, 000 yen ($83) a night. 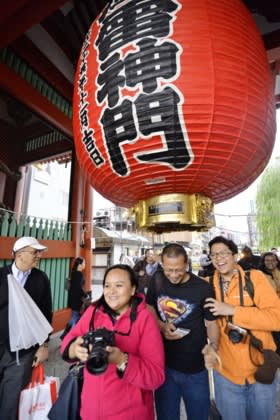 Hotel operators are rushing to add rooms in Tokyo as the number of overseas visitors continues to grow.

The hotel will be built close to Tokyo Big Sight, a large convention center that will host some events during the Olympics. In addition to overseas tourists and Olympic spectators, the company is betting on higher demand from visitors attending international conferences and trade shows at Tokyo Big Sight. The new hotel is expected to cost about 8.6 billion yen.

Kyoritsu Maintenance is gearing up to open a 106-room Dormy Inn hotel in Tokyo's Ueno Okachimachi district in April. The company is considering stationing multilingual staff at the hotel around the clock, anticipating a steady flow of guests from China, South Korea and other countries.

New hotels are already popping up around the capital as the number of foreign tourists continues to rise, thanks partly to the weaker yen. At the luxury end of the market is the Andaz Tokyo Toranomon Hills. U.S. operator Hyatt Hotels opened the doors to its newest addition in Japan in June at the Toranomon Hills commercial and residential complex in central Tokyo.

A place to stay, and play

Despite the increasing supply, rooms in Tokyo can be hard to find. The Courtyard Tokyo Ginza Hotel, operated by Marriott of the U.S., was nearly full in October, with occupancy hitting 99.5% at the location in the upscale Ginza district.

The Hotel Okura Tokyo, also in the city center, has been cutting discounts as rooms remain full. The hotel's revenue per room is 20% higher now than a year ago.

The booming hospitality business is encouraging construction. According to U.S. market research specialist STR Global, hotel development plans as of Dec. 1 suggest 9,938 rooms will be added to the existing supply in Tokyo, an increase of about 2,400 rooms since the previous survey, conducted April 1.

A survey by the Welfare Ministry shows 97,879 hotel rooms were available in Tokyo as of March 31. The new rooms on the drawing board or under construction are equal to about a 10% increase in supply.

Budget hotels, which offer rooms for less than 10,000 yen a night, are also planning to add new locations in Tokyo.

Sotetsu Holdings is looking to open four Sotetsu Fresa Inn hotels with a total of 641 rooms in Tokyo by the autumn of 2016. They will be built in areas with good access to transportation, such as near East Japan Railway's Ochanomizu and Ueno stations. Room rates will likely range between 8,000 yen and 10,000 yen a night.