Southeast Asia could be on the verge of a 'thanaka' boom British Dispensary President Anuruth Vongvanij poses with his hit product -- a body powder made from a traditional paste once popular in Myanmar -- in Bangkok in May. (Photo by Marimi Kishimoto)
MARIMI KISHIMOTO, Nikkei staff writerJuly 29, 2017 10:58 JST | Myanmar, Cambodia, Laos
CopyCopied

BANGKOK -- A traditional skincare ingredient has taken a seldom-traveled road -- from Myanmar to Thailand.

It is rare for a Myanmar trend to cross the Thai border. But thanaka has found its way and taken hold of at least two cosmetics makers in the kingdom.

Thanaka is a traditional paste made from ground bark of certain trees. In Myanmar, locals apply the yellowish paste to their faces.

In April, British Dispensary, a Thai maker of personal care products, rolled out a cooling body powder that contains thanaka. British Dispensary is promoting the product, marketed under its Snake Brand line, as a way to cool the body after a shower or before going to bed.

As coincidence would have it, in Thai "thanaka" means "apply on face."

An advertising video shows a young man and woman walking along a street dusting their faces with the powder. British Dispensary ran a similar social media campaign, posting a series of photos. The Thai business has spent some 200 million baht ($5.98 million) marketing the product, even right on out in the streets.

"I wanted to make a product scented with medical herbs," the president said. "I also noticed that people in Myanmar, who typically have beautiful skin, have constantly used thanaka."

Another Thai cosmetics company, Everyday Happy, has a thanaka skincare line that ranges from soap to foundation to body powder. Sales of De Leaf Thanaka products have been doubling every year since 2014. 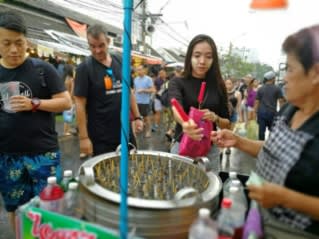 A woman along a street in Bangkok applies thanaka powder to her face.

In 2016, the line got picked up by large supermarkets, drugstores and convenience stores. The company expects the line's 2017 sales to jump 70%. Earlier this year, it rolled out a thanaka-based body scrub.

The paste has long been used as a natural sunscreen; it is said to prevent acne and minimize wrinkles as well, according to Everyday Happy.

Before thanaka, Myanmar trends rarely spread to more developed Southeast Asian countries. Trends always went the other way -- from Thailand to Laos, Cambodia or Myanmar -- as migrant workers brought products back to their home countries.

According to the Myanmar Overseas Employment Agencies Federation, Thailand employs more Myanmar people than any other foreign country. As a result, Thai culture easily influences consumer trends in Myanmar.

But it is no longer a one-way street.

Meanwhile, demand for thanaka in the land where it originated has been shrinking. According to the operator of TNC Asia Trend Lab, a Japanese information website that provides tips on 14 Asian countries, Myanmar's youth appear to find the traditional skin cream rather outdated. Myanmar women are now accustomed to applying makeup from South Korea and elsewhere, and the traditional paste does not work well with modern cosmetics.

Nonetheless, Thailand's thanaka boom will likely expand to other parts of Southeast Asia. In Vietnam, a local newspaper recently featured thanaka as a magic powder ... from Myanmar.

Everyday Happy, meanwhile, has been exporting De Leaf Thanaka products to Myanmar and is expanding its sales network in Laos.

Beauty knows no boundaries. The Thanaka boom seems to be spreading throughout Southeast Asia.