US law students have 3,000 reasons to intern in Tokyo

TOKYO -- Seven of the best law school students in the U.S. recently donned yellow baseball uniforms at Tokyo Dome to cheer for the Fukuoka SoftBank Hawks. They had probably never heard of the team, but they had no doubt why the law firm that they were interning for had brought them to the game.

Interning might not be the right word. Summer associates -- students who have just finished their second year of law school and spend eight to 10 weeks at firms -- are often paid $3,000 a week in the U.S. The law firm Morrison & Foerster in Tokyo says, "In general, we match those salaries."

Morrison & Foerster is the largest international law firm in Tokyo. It employs 120 attorneys and has been a legal adviser to mobile carrier SoftBank, overseeing more than $50 billion worth of mergers and acquisitions in the past few years. Among the deals was the $21.6 billion investment into U.S. wireless operator Sprint Nextel, the largest ever outbound investment from Asia, and the largest announced U.S. M&A transaction of 2012. As Japanese companies venture out to the world looking for M&A deals to secure future growth, good lawyers that can handle international litigation and deal closings are in demand. Morrison & Foerster's Tokyo branch has a full-fledged summer associates program that invites students from the top U.S. law schools.

Skadden, Arps, Slate, Meagher & Flom, the law firm that advised Nikkei in its acquisition of the Financial Times Group, also has two summer associates currently in Tokyo learning the trade. One from Harvard and the other from UC Berkeley, they are likely to join the firm next year.

One of Japan's largest domestic law firms Nishimura & Asahi, with over 500 attorneys, is also conducting a summer program, bringing in students from overseas and Japanese law schools. As their Japanese clients increasingly look abroad to offset the shrinking domestic market, Japanese law firms are determined to stay ahead of the curve.

"I really like that the work has been substantive. It is actually helping out with deals and transactions," said Phillip Arredondo, a summer associate at Morrison & Foerster. After going through a week of basic training, the "summers" are assigned to various teams within the law firm, such as litigation, M&As, technology transfer, finance or real estate. They accompany senior attorneys to meetings with key clients such as SoftBank and Hitachi, and are required to assist in producing legal documents.

"Our program is geared to anybody who wants an international career, those who want to practice on cross border cases" said Louise Stoupe, a New Zealander who has lived in Japan for more than 15 years and is a partner at the firm. "If you are successful during the summer program, you get a job offer for a permanent position." The students then go back to law school for their third and final year, before returning to Tokyo to work for the firm.

The 10-week period is a time when the law firms evaluate the potential of the candidates; at the same time, it is an opportunity for the students to evaluate whether the company has the right chemistry, the right vibe. Therefore, law firms bend over backward to entertain the "summers" and leave a good impression. Apart from cheering for the SoftBank Hawks, the Morrison & Foerster summer associates enjoyed an evening boat ride wearing traditional Japanese yukata light cotton kimonos, hiked Mount Takao near Tokyo, tried yoga poses at the company studio and barbecued at the boss's house. 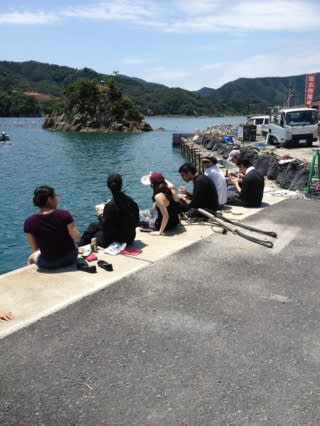 Summer associates enjoy lunch by the sea during one of their outings.

Not everybody can participate in the program. Every year, more than 200 law students apply for the Tokyo stint, from which seven or eight are chosen. This year's seven come from schools such as Harvard, Georgetown, Stanford and Yale.

Securing a summer position is vitally important in getting a job offer. More than 60% of current associates at Morrison & Foerster's Tokyo branch went through the summer associates program in Japan. Ken Siegel, managing partner of the Tokyo office and who has advised SoftBank on more than a dozen deals, started out as a "summer" in the 80's and rose through the ranks.

The selection progress starts early. Each August, a partner from the Tokyo office flies to the U.S. to take part in open campus recruitment at the top schools. There, they try to get a grasp of which students, between the first and second years of law school, they want to invite to the summer program, which runs from May to July the following year. "First year grades are critical because it is the most important way to measure a student's capability," Stoupe said.

Maintaining a summer program is not cheap. Yet law firms are convinced that demand for the best lawyers will only increase as Japanese companies seek reliable stewards in their outbound push.

"International M&A deals are becoming increasingly complex," said Shinji Hatta, a professor at the graduate school of professional accountancy, Aoyama Gakuin University. "Governments are continuously strengthening regulations. The knowledge required of a modern day cross-border attorney is incomparable to the past."

Hatta said the U.S. Foreign Corrupt Practices Act is a good example. If a Japanese company were to pay bribes to a government official in China, for instance, the company could be charged for violating the FCPA in the U.S. Currently, more than 20 Japanese companies are being investigated for such cases, Hatta said. "It is not enough to know the rules of one country. Modern day lawyers must understand the implications of laws that transcend borders," he said.

The difference between hiring a good (albeit an expensive) lawyer and a bad one could have long-term consequences, said Kotaro Inoue, professor at the department of industrial engineering and management, Tokyo Institute of Technology. "A good M&A lawyer should be able to read what kind of synergies the buyer wants from the acquisition, predict what obstacles could stand in the way and make sure those issues are smoothed out in the initial contract," he said.

Hideaki Miyajima, a professor at the graduate school of commerce, Waseda University, said, "For Japanese companies, going abroad is the only path to maintain growth faced with a shrinking population." This, he argues, is especially true for industries that have predominantly been serving a domestic audience, such as finance, food and journalism. "Companies need a good steward that can advise them choose the right target and to not overpay."