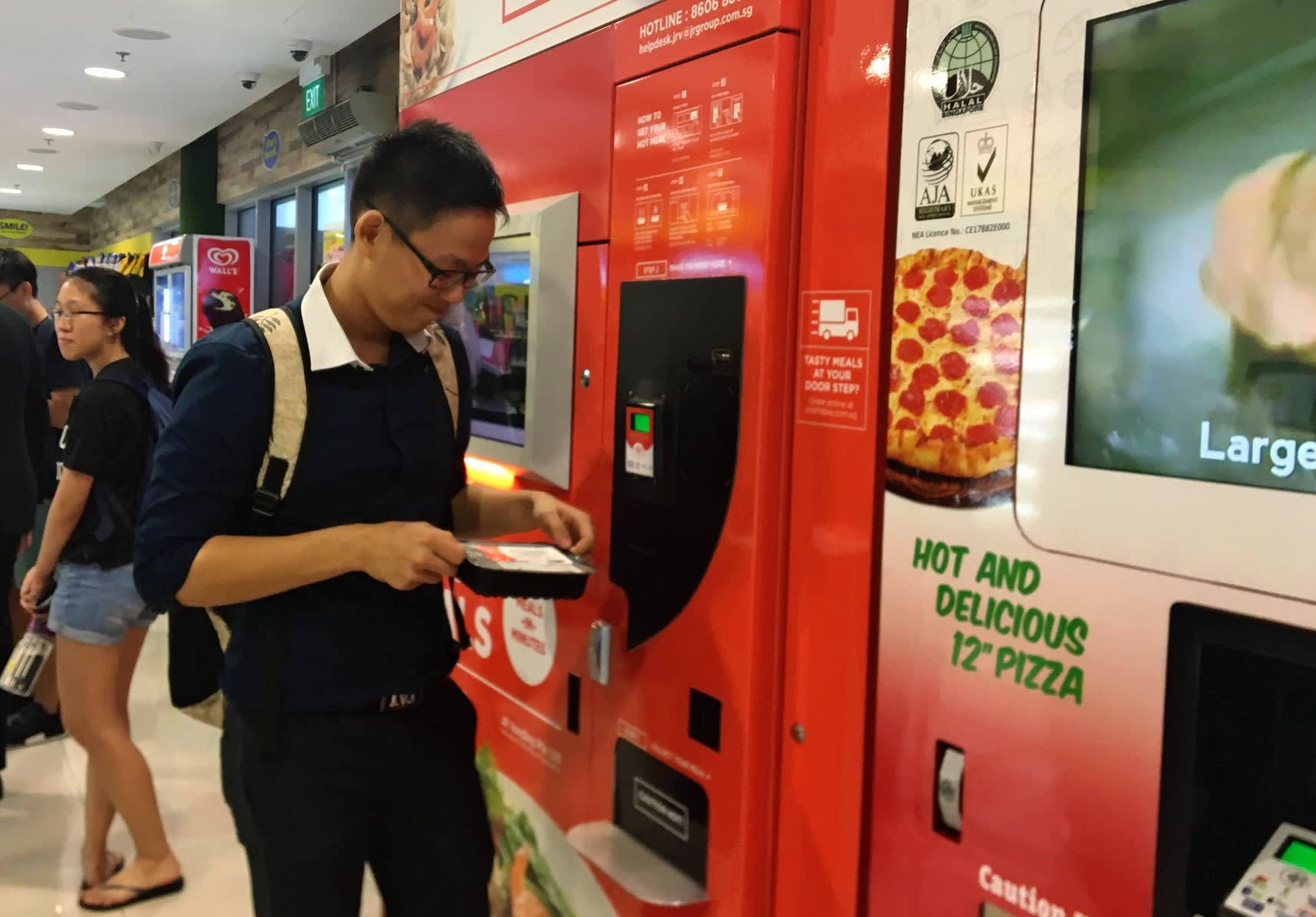 SINGAPORE -- A number of retailers in Singapore are rushing to automate their in-store services. Self-service checkout, for example, can minimize waiting times for customers. For the retailers' part, this could be a prime solution for the ongoing labor shortage and soaring manpower costs amid the city-state's graying and shrinking population.

Cheers, a local convenient store chain, in July opened a pilot shop within a vocational college. Inside, a wall is dedicated to an array of vending machines offering hot meals such as fried rice and pizza. "It's hot and tasty," said a student who had just bought a slice of pizza. "It's very convenient to complete shopping quickly."

A self-checkout system is also available at the shop. The entire store is designed to be operated completely unmanned. For security, entry to the store is controlled with app-based logs. Shoppers are required to install an app in advance and scan the QR code on the app when entering and exiting the shop.

The retailer also makes the most of digital data, including video records, for ascertaining buying behavior of customers and automatically placing orders to fill up products on shelves.

Singapore retail sales rise with some help from shopping fest

NTUC FairPrice Co-operative, the chain's operator, said in a statement that unmanned and cashless retailing can "save up to 180 man-hours per week." Although the effort is currently on a pilot basis, the business aims to expand the digital format to other locations, too. It will allow the company to reallocate its store staff to "higher-value jobs such as supply chain management, customer relationship management, digital marketing and data analytics," the statement explained.

Efforts to reduce reliance on manpower extends to supermarkets. The operator has already introduced the self-checkout system in 63 of the 140 or so outlets in its FairPrice brand supermarket chain. 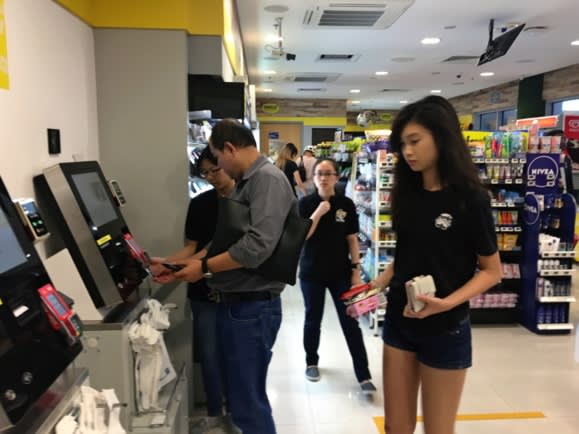 Sheng Siong Group, an affordable supermarket chain, has also partially automated its checkout process. Instead of a conventional form, in which a cashier scans, packs and collects payment from customers, the chain now allows its customers to pay their bill using a cash machine. The new payment method has been installed in 22 of its 43 stores. The business wants to expand it to other locations, too.

Some retailers have even given up running manned stores.

Kalms, a Singaporean gift retailer, last year shut down all of its brick-and-mortal outlets, after struggling with soaring rent and manpower costs. It now focuses on retailing online as well as via vending machines. In November last year, it began selling accessories, soft toys and other gift items through vending machines installed in shopping centers and near train stations. 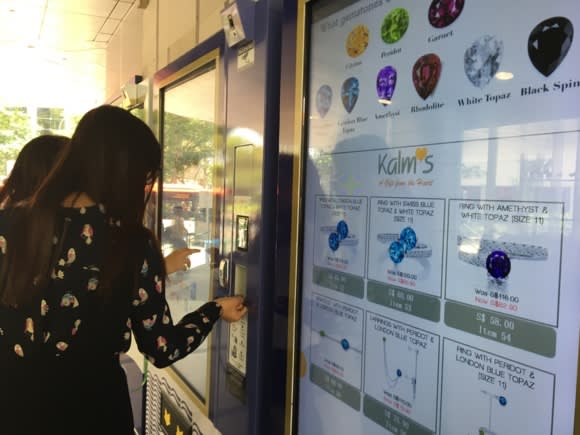 Singaporean gift retailer Kalms now sells its products only through e-commerce and vending machines set up across Singapore, like the one shown above.

One major motivation to push retailers in the city-state for digitization is the ongoing severe labor crunch. The country's retail and service sectors have been relying on foreign workers to supplement the shortfall. But in recent years the government has tightened controls on accepting foreign workers, largely due to a backlash from its citizens. As a result, the manpower shortage and costs of hiring have become an even greater hurdle for businesses.

Another concern is new forms of retailing emerging in Singapore and elsewhere, such as online shopping websites. In addition to delivery services provided by online grocery stores, such as RedMart, services to buy things by hopping around shops on behalf of customers and deliver them to customers' homes, are also becoming popular.

In July, U.S. online giant Amazon.com launched its Prime Now services that provides 1 to 2-hour delivery in Singapore, the first foray for the services into Southeast Asia.

Real-store retailers in the city-state are experiencing tough times. Shopping centers and other commercial facilities are struggling to find tenants. As consumers here become increasingly sophisticated with myriad of choices for items, they now pay attention not only to the material goods they buy, but also the shopping experience itself. In addition to automation and cost-cutting efforts, retailers are faced with an increasing need to provide attractive shopping spaces that can satisfy shoppers.

The push for automation is in line with the Singaporean government's efforts to skill up its labor force through life-long training. The government has been scaling up financial support for workers who take up classes to upgrade their skill sets. The idea is that while automation efforts may eliminate some jobs, those with more time on their hands can acquire new skills and move on to higher-paying jobs such as in robotics and engineering, which are much needed for the city-state.