HANOI -- Vietnam's mobile game market is booming, and Japanese companies are vying for a piece of the action.

KDDI leads the pack of Japanese information technology companies and game developers looking to cash in on the Southeast Asian country's mobile game market, which is expected to quadruple in the next several years to over 20 trillion dong ($880 million).

In December, KDDI teamed up with MobiFone Telecom, Vietnam's second-largest wireless service provider with 34.6 million customers. The Japanese telecom giant plans to sell mobile games through a system similar to its au Smart Pass service in Japan, which allows people to buy games, movies and music using a special app.

MobiFone, which started a content download service in July 2016, is expecting the tie-up to boost content sales by around 15-20%, according to Vice President Nguyen Manh Hung. 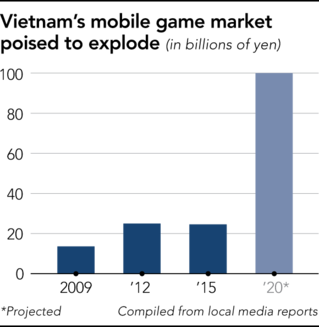 Game downloads from Fuji Technology are free, but certain items will carry a price tag. The company is targeting more than 500,000 game downloads.

To reduce development costs, Fuji Technology is localizing Japanese games for the Vietnamese market. As the number of Vietnamese entering Japan grows, the company is betting that interest in Japanese games will also grow.

"Currently, many Vietnamese enjoy free smartphone games," says Fuji Technology CEO Noriko Kato. "But the number of Vietnamese gamers who are willing to pay is on the rise."

In September 2016, Fuji Technology entered a capital and business tie-up with Bushiroad, a Tokyo-based card game developer, with an eye to selling Bushiroad games as well.

Mobile games on a roll

The popularity of mobile games began to skyrocket in Vietnam around 2016. According to one estimate, there are now more than 150 mobile games available. Some have turned out to be a massive hits, including "Vo Lam Truyen Ky," a role-playing game in which historical heroes fight each other, and "MU Origin," a game that pits users against monsters. The two have been downloaded hundreds of thousands of times.

Vietnam had an estimated 20 million gamers in 2014, mostly young people. Areas near universities are crowded with game cafes boasting high-speed internet, where young gamers play well into the night.

But over the past few years, many gamers have ditched the cafes in favor of mobile games. These mobile gamers have been particularly drawn to the large-screen smartphones offered by Apple and Samsung Electronics.

Vietnam's poor wireless communications will see dramatic improvements this year as fourth-generation mobile technology is introduced to large swaths of the country, giving the mobile game market a boost.

Video game consoles like Nintendo's Switch, which launched in Japan this spring, are still too expensive to gain much traction. That leaves mobile games as the likely front-runner as the Vietnamese game market continues to burgeon.