Yangon developer looks to cash in on loop line improvements YANGON -- The Japanese trains trundling along the line that loops around Myanmar's commercial capital, Yangon, are a throwback to an earlier era and a far cry from the modern carriages that whiz through Tokyo.

But improvements to the Yangon Circular Railway are likely to speed things up a bit, starting this year, and they may spark a building boom along the line. If the railways become more efficient at moving people around, that should also help untangle Yangon's snarled traffic.

Yangon's 46km loop line is slightly larger than Tokyo's 35km Yamanote Line. At present, it takes about three hours to make a full circuit, as the trains crawl along at an average speed of 15kph, due to aging tracks and an inadequate signaling system. Technical assistance from Japan is aimed at refurbishing these.

Away from the tracks, Cyrus Pun, head of Yoma Strategic Holdings' real estate business, said synergy between the railway and real estate development is important to Yangon's growth. Singapore-listed Yoma is the core company of Myanmar conglomerate Serge Pun & Associates. 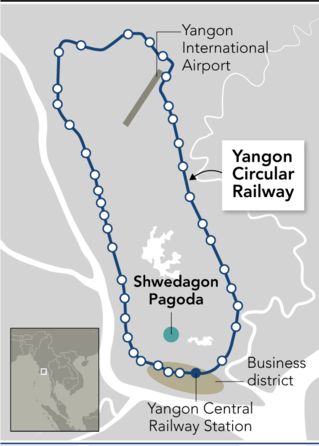 Pun said he is counting on the Circular Railway improvements. The loop line must negotiate another circle, a vicious one: Slow, infrequent service translates to few riders, little revenue and scant money for improvements. Pun stressed that public and private investment in areas near stations will be needed to get the railway out of its rut.

Yoma has the jump on its competitors, beginning construction on a commercial complex on a 4-hectare site near Yangon Central Station. Yoma's plan for the development rests on two pillars: one is Yoma Central, comprising two 24-story office towers, a condominium complex, and a building housing a serviced apartment and hotel. The concept is modeled on Tokyo's Marunouchi business district.

Japan's Mitsubishi Corp., Mitsubishi Estate and other companies are taking part. Last November, Japanese builder Taisei and others have received contracts for the project. The goal is to attract corporate and financial industry tenants.

The other pillar is the Peninsula Yangon. The luxury hotel, to be operated by Hongkong and Shanghai Hotels, will be housed in the old Ministry of Rail Transportation Building. The exterior and interior of the 140-year-old British colonial building will be refurbished, but preserved as much as possible. 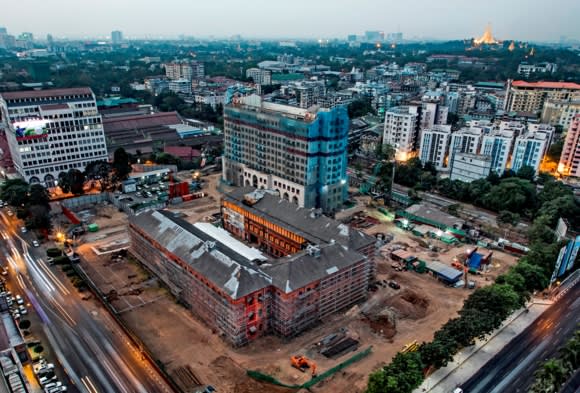 The headquarters of the old Burma Railways will become the Peninsula Yangon. (Photo courtesy of Hongkong and Shanghai Hotels)

In addition to Yoma's project, there is also a plan to redevelop the area near Yangon Central Station. The Myanmar Times reported that Myanma Railways is soliciting bids, with the winners to be announced soon. The total costs of redeveloping the 25-hectare site, including the station building, are estimated at $2.5 billion.

The improvements to the Circular Railway are likely to bring life to other areas as well. A number of large commercial complexes have opened in Myanmar, but connections to railway stations have not been a priority. That could change as more people start using railways to commute to work or school.

The Ministry of Transport and Communications, which oversees Myanma Railways, is promoting urban development based on rail transport. Last November and December, Myanma Railways solicited proposals from private companies to develop areas around three stations near Yangon.

But Pun pointed out that balancing the interests of various government ministries makes redevelopment near train stations difficult. In Yangon, which was Myanmar's capital until 2006, land, particularly near railway stations, is owned by the ministries. Strong leadership is needed to get the consent of the ministries in order for development to proceed, he said.

Yangon had a population of about 5.2 million in 2014, and that number is expected to double over the next 20 years as people move in from the countryside. Improvements to urban infrastructure, including transportation and housing, is a pressing issue.

Most residents of Yangon use buses to get around town at the moment. According to a survey by the Japan International Cooperation Agency, railways only handle about 1% of Yangon's public transport needs.

The Circular Railway's track improvements will be financed by Myanmar. Official development assistance from Japan worth about 25 billion yen ($224 million) will be spent on upgrading signaling systems and six 11-car trains. The work, which was scheduled to start last autumn, was postponed until this year due to delays in bidding procedures.

Japan is also helping with improvements to a major train line between Yangon and Mandalay, the country's second-largest city. It is providing a range of technical support, including safety and coping with high passenger volume.

If Japan can help ease Yangon's traffic congestion by making the Circular Railway run more smoothly, it will serve as a showcase for the country's development assistance, together with the Thilawa special economic zone.