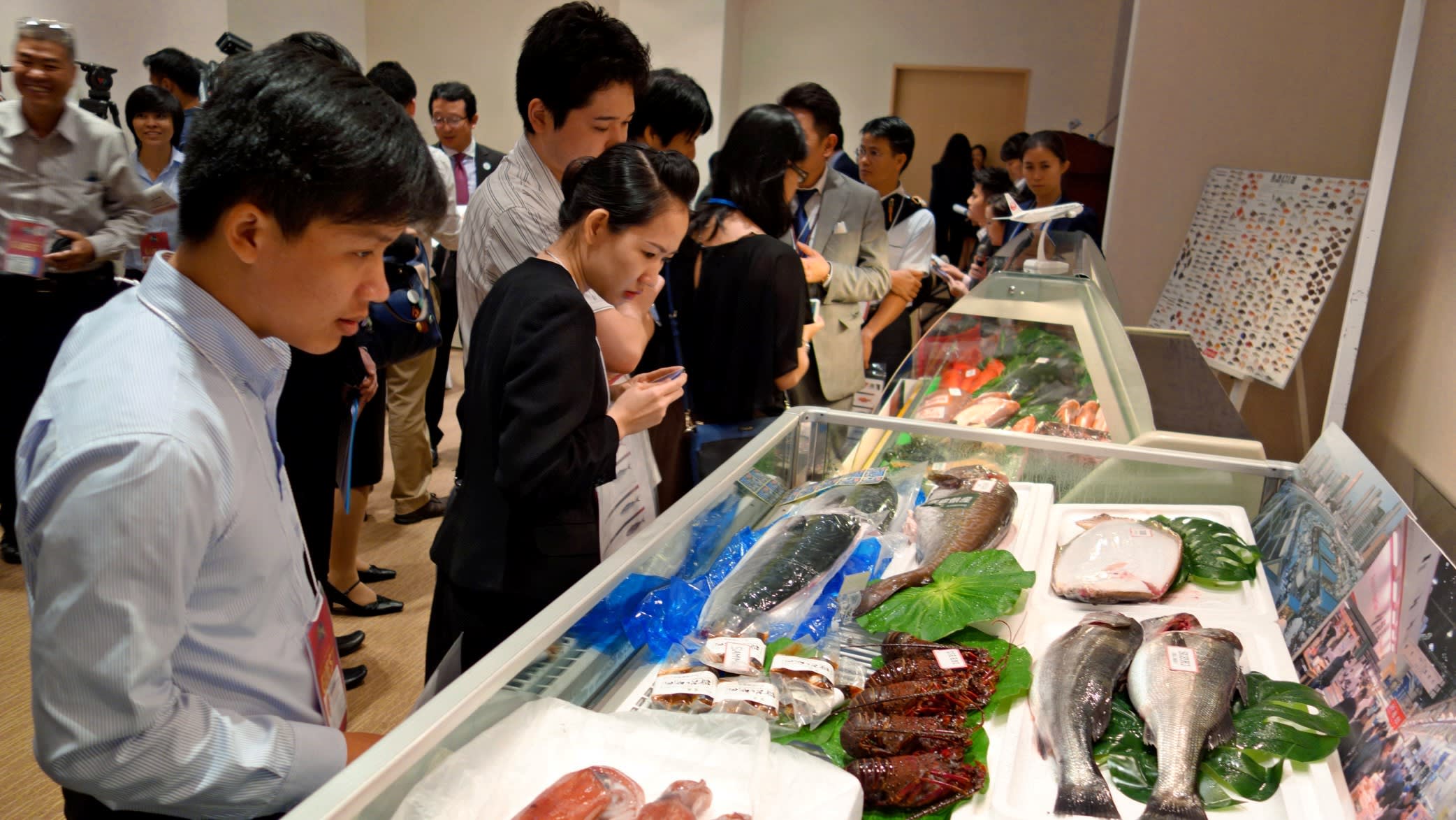 The move is largely attributable to declining domestic fish consumption as a result of the dwindling birthrate and aging population as well as changes in tastes of Japanese consumers. The number of wholesalers at the market has declined to below 700, less than half of its peak. To make up for the lost revenue, wholesalers have shifted their focus to consumers abroad.

Fortunately, sushi has become popular recently in Southeast Asia, and this is pushing up demand for seafood from Japan. Fisheries products exports have grown by 150% in the past four years from roughly 20 billion yen ($167 million) in 2009. 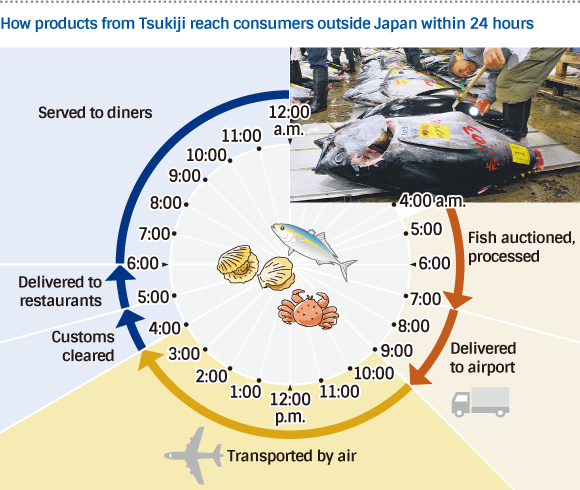 To tap into the surging demand in Southeast Asia, some leading wholesalers have started a system to directly deliver products from Tsukiji by air. However, it has not been easy for smaller wholesalers to independently offer overseas delivery. Thus, Wholesales Co-Operative of Tokyo Fish Market has taken the initiative and started a joint effort to develop the Asian market.

On Jan. 15, wholesalers from Tsukiji market hosted a food sampling party at a hotel in Ho Chi Minh City, Vietnam. Almost 60 operators of Japanese cuisine restaurants and wholesalers in the country, 80% of them Vietnamese, tasted sushi with interest.

Osamu Shimazu, an executive member of the cooperative, explained in detail how to prepare and eat various foods that are not well known in the country, such as sea urchin and Spanish mackerel.

Vietnam is currently experiencing a boom in Japanese cuisine. Ho Chi Minh City is now home to around 300 Japanese restaurants, roughly double the number two years ago. Many of these establishments feature sushi and sashimi, two of the best-known Japanese dishes.

Although Vietnamese traditionally do not eat fish raw, some gourmet consumers there have quickly become sushi fans. Luu Tuyet Mai, CEO of Mesa Group, a major local distribution company, thinks there could be strong demand for foods from Tsukiji, because the quality is high and reliable. Mesa Group operates a joint venture with Japan's restaurant chain operator Ootoya Holdings.

Katsuo Ooyagi, president of Suzuyone Suisan, said wholesalers at Tsukiji could generate a lucrative business if they shared a single container to transport fish abroad as a consolidated delivery. Ooyagi was one of the representatives of three wholesalers that participated in the sampling party.

One hurdle that wholesalers have to clear to realize this dream is creating a logistic system that could transport fresh fish. A logistics network for chilled delivery has yet to be established in Southeast Asian countries, except for Singapore and the Bangkok area.

In Vietnam, temperature control is challenging, because most shipping companies use motorcycles to deliver refrigerated goods. Mai of Mesa Group said that with the current logistics network, local shippers would not be able to keep fish fresh, even if it arrived fresh from Japan. 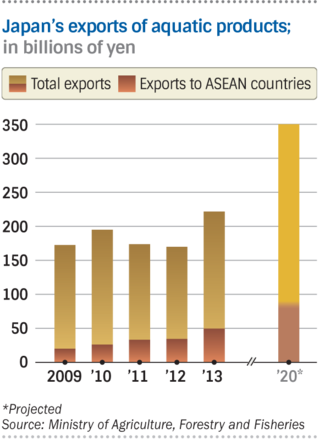 Another problem for transporting fresh fish is that the rules on customs clearance of fish are arbitrary in some countries. According to the owner of one Japanese restaurant, fish can be delayed at customs if importers do not have influence with customs officials.

To get around the problem, some restaurants are importing fresh fish by having a courier purchase them in Japan and flying with them as checked luggage on a commercial flight.

Strictly speaking, this practice is illegal, because importers do not pay the customs duties, although the practice is deemed essential to regularly import fresh fish.

Clearly, restaurants cannot hope for significant growth if they have to rely on private couriers for supplies. Therefore, some Japanese logistics firms have started setting up a so-called "cold chain" -- a temperature-controlled supply chain.

Last September, Japan Airlines launched its Cool EMS service to deliver small refrigerated parcels from Japan to Vietnam in collaboration with the Japan Post group and others.

The service uses a special cooler box that enables items to be maintained at 0-10C for chilled and minus 15C or colder for frozen items for up to 80 hours from acceptance to delivery. The contents of the boxes would remain fresh even if customs clearing and shipping took longer than expected. The companies plan to offer the service to restaurants in areas where logistics infrastructure is still underdeveloped.

Other businesses have already pumped a large amount of money into chilled delivery service. Kawasaki Kisen, a shipping and warehouse operator, is planning to partner with Japan Logistic Systems and establish a seamless temperature-controlled transportation network. Japan Logistic Systems already has a transportation network of automobile parts in Vietnam.

Under the plan, Kawasaki Kisen is expected to build a large freezer and refrigerated warehouse in Ho Chi Minh City by the end of 2016 through a co-parent company with Japan Logistic Systems and make deliveries using refrigerated and freezer trucks.

Such companies as Cool Japan Fund, a public-private fund that aims to support and promote the development of demand overseas for high-quality Japanese products and services, also aims to put money into the project.

Joji Koda of Cool Japan Fund's investment strategy group said that in five or six years, the facility will be indispensable. An official of a private investor said that the involvement of the Japanese public-private fund might bring additional transparency to the customs-clearance process.

The Japanese government hopes to increase annual fisheries exports to 350 billion yen by 2020, roughly 60% more than the figure in 2013, with Southeast Asia regarded as the largest target customer.