NEW YORK -- U.S. consumer-goods company Proctor & Gamble has seen the future, and it is swaddled in diapers. Specifically, disposable ones. 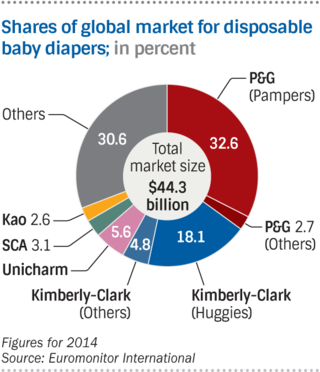 The global market for single-use baby diapers is swelling along with emerging economies. It was valued at $44.3 billion in 2014, up 7% from 2012. Sensing an opportunity, P&G is pumping more resources into this segment, hoping to make up for the hit it has taken from a maturing cosmetics market and a strong dollar.

Since autumn 2014, P&G has launched new products of disposable baby diapers in Brazil, Russia, India, and China. In addition to offering diapers that are taped at the sides, the company is bolstering sales of pull-on diapers, an area in which its Japanese rivals gained an earlier edge in development and marketing.

Touting new products designed to be soft and easy to use, P&G is launching a marketing offensive in China in 2015. A big goal is to expand sales in Asia and Latin America. In 2013, the company made changes to its mainstay Pampers line of disposable diapers that it claims significantly improved the absorbency and texture. Over 10% of the company's sales come from Pampers.

At a consumer goods industry conference in Florida on Feb. 19,  P&G CEO Alan Lafley said that capturing a solid share of the global diaper pants market could translate into a sales increase of $2 billion.

The company is also aiming for growth in adult diapers and products for mild incontinence. In summer 2014, P&G re-entered those segments in the U.S. and Europe. The outlook for those products is bright due to the aging global population and profitability per unit compared with diapers for babies.

Currently, the market for goods aimed at adults is dominated by major Swedish hygiene product maker Svenska Cellulosa, Kimberly-Clark and Japan's Unicharm. But P&G is determined to increase its share under its latest offensive.