Garrett Popcorn Shops, a Chicago-based snack retailer, will offer Matcha Carmel Crisp popcorn starting April 16. It will be sold in quart-size (roughly 1 liter) tins for 1,350 yen ($11.20) in Harajuku, Tokyo, and at a branch of Shisui Premium Outlets, through the end of May. Stores will have up to 200 quarts available per day. 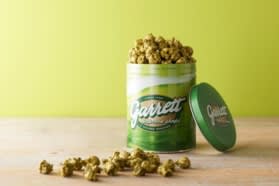 The tea used for the flavoring comes from Shizuoka Prefecture, Japan's largest tea-growing region. "We have been wanting to introduce the flavor since our first launch in 2013. It took awhile because we had to test various ways to determine how to maintain the delicate flavor and aroma of matcha when prepared at high temperature," said Kanae Yano, a spokeswoman for Garrett. As the taste catches on worldwide, the company is looking to sell green tea-flavored products abroad in the future.

Ice cream chain Baskin-Robbins will add Oreo Matcha to its selections starting April 24 at its B-R 31 Ice Cream shops in Japan. It is also introducing two beverages, Matcha Blast and Creamy Matcha Blast, from May 11. Oreo is a wildly popular chocolate-flavored cookie brand in the U.S., and green tea is beloved in Japan. "We thought a fusion of these two widely loved tastes would be nothing short of a perfect match. It will open doors for Oreo lovers to matcha and for matcha lovers to Oreo," a spokeswoman said. Prices for Oreo Matcha ice cream will start at 330 yen, while the beverages will sell from 370 yen and up.

Haagen-Dazs, another U.S. ice cream brand, introduced a new ice cream bar, Matcha Crumble, on April 7. The green tea and chocolate-coated concoction is sold at convenience stores and supermarkets in Japan for 294 yen. It will be available until around summer.

Matcha is shade grown, high quality tea that is finely milled. It is less astringent than other types of tea and has a full, smooth flavor. It is rich in antioxidants and theanine, an amino acid that is said to foster relaxation.