Uber, Grab do things a little differently in Yangon YANGON -- Uber Technologies and Grab, two of the biggest names in the ride-hailing business, are rapidly expanding in Myanmar's largest city, where the spread of smartphones is unlocking big opportunities.

Yangon's authorities appear to have rolled out the welcome mat for them, viewing the services as a way to improve the city's underdeveloped transport infrastructure.

U.S.-based Uber announced the launch of its service in Yangon in mid-May, in a ceremony attended by Yangon Region Chief Minister U Phyo Min Thein.

Describing his observations of Uber's operations in London, where, like in many other cities, the startup is at loggerheads with the taxi industry, the chief minister said passengers there appeared happy with the San Francisco-based company's low-price, high-quality service.

Uber has grown fast in the U.S. by recruiting private drivers willing to provide rides to paying passengers. In Myanmar, however, Uber plans to hire only licensed taxi drivers for its operations, at least for the time being. This is the first time the company has entered an Asian market as a taxi-hailing service, according to Sam Bool, Uber's expansion general manager for Southeast Asia.

Bool said that with so many taxis already on the roads of Yangon, there was no need to recruit private vehicles.

This approach is also a convenient way to avoid legal problems that may arise from using unlicensed drivers for paid transport services.

For its operations there, Uber tries to tie up with the Yangon Bus System, the city's regular bus service network.

In January, the local government embarked on streamlining the city's inefficient local bus service, which has been criticized as one of the factors behind the chronic traffic jams there, a major source of frustration among citizens. 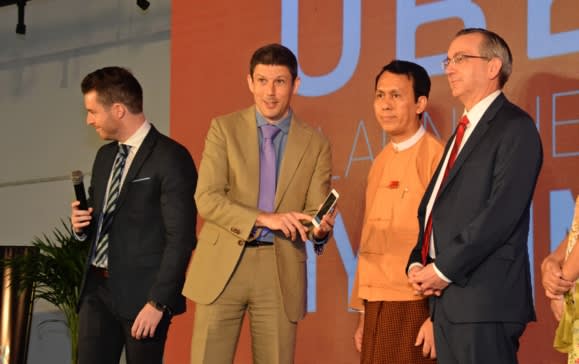 As part of its partnership with the YBS, Uber has proposed offering riders going to and from bus stops free or discounted rides, subsidized by the bus service. This is similar to a program Uber has introduced in some parts of the U.S. in partnership with a local bus agency.

If this collaborative approach proves successful, the company may consider adopting the same strategy in other countries as well.

Also making moves there is Singapore-based Grab, Uber's main rival in Southeast Asia. In March, the company tentatively rolled out a taxi-hailing service in Yangon under which it connects licensed taxis with people needing a ride via the company's mobile app.

Grab has announced its official launch on July 26 after four-month trial period collecting feedback and data from drivers and passengers.

In June, Grab teamed up with Wave Money, a local mobile payment service that operates an e-wallet platform, to offer a cashless payment option for passengers.

Wave Money's service, run by a joint venture between a local mobile carrier and a bank, allows users to transfer money to their personal e-money accounts through their mobile phones.

There are no fare regulations for taxis in Yangon; fares are negotiated between drivers and passengers. This makes the market easier to enter for ride-hailing services like Uber and Grab, which collect from the drivers part of the money paid by passengers.

One appeal of the apps is that they provide information about the drivers, which makes passenger feel safer. Foreign tourists also like these apps because they allow passengers to designate their destinations on a map, removing the language barrier.

The main challenge for the ride-hailing services is how to expand their pools of taxis. If the number of registered vehicles is small, customers may have to wait a long time to get picked up.

Uber and Grab are not likely to win over customers in Myanmar with their prices, as their rates are roughly the same as those charged by independent taxis. But a big reason they think they can be competitive is the rapid spread of smartphones in the country, which fully introduced fourth generation wireless services in June.