GUANGZHOU, China -- An abandoned skyscraper still stands incomplete in the bustling capital of Guangdong Province after 16 years because no one is brave enough to ask for it to be torn down. 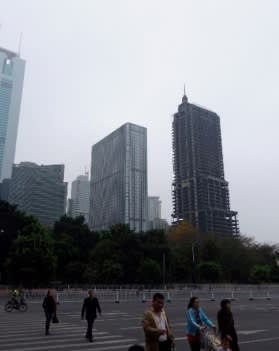 The 46-story building looks strange as it towers over Guangzhou, a commercial hub in southern China with a population of more than 12 million. Its location just behind a golden high-rise building -- popular in China -- and luxury hotels makes the concrete shell look especially creepy and eerie.

In Chinese, buildings left unfinished because of a lack of money are called "lan wei lou." "Lan" means "decaying" or "rotting," "wei" is "the tail" or "the ending" and "lou" is "buildings."

The Guangzhou building was meant for a shopping mall and restaurants on the lower floors, while condominiums, offices and observation decks were to make up the rest.

But why has it been left incomplete for so long? The building was a joint venture between a local entity in Guangzhou and a Hong Kong company. However in 1999, shortly after construction started, the joint company faced funding difficulties and was forced to stop work. During the next 10 years, it struggled to find investors and finally did begin accepting investment from a company, only to get locked into a lingering contract dispute, which led to a legal battle. In 2012, China's supreme court ordered the case be settled, although after three years nothing has been heard from the owner.

I asked a local company worker why the building has not been demolished. His answer: "Everyone thinks so, but behind large unfinished buildings there always tends to be large flows of suspicious money related to political corruption, so nobody is brave enough to say 'tear it down.'''

The best answer may be to leave the "lan wei lou" as it stands. However, the emergence of that term seems to reflect the country's situation and its people who are known to be difficult to deal with.